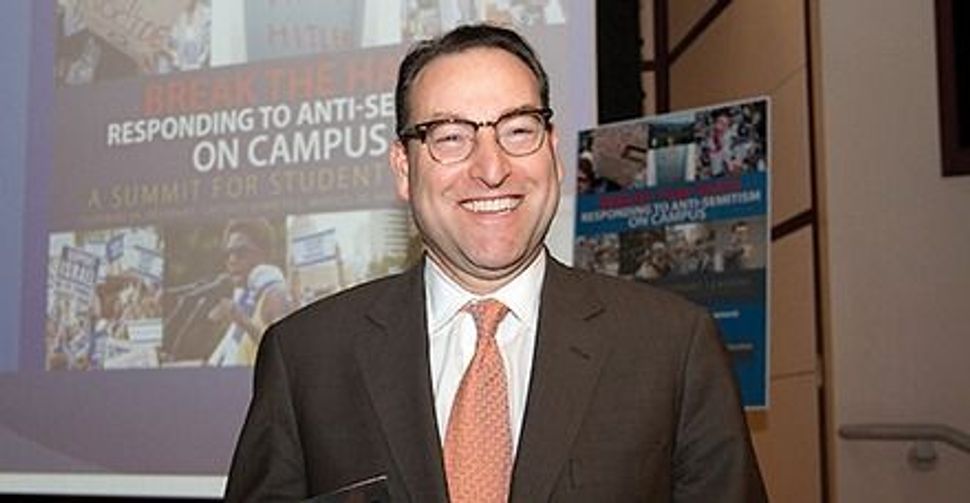 Kenneth Marcus, founder and director of the Louis D. Brandeis Center for Human Rights Under Law, addressed the “Break the Hate” Summit at Boston University.

WASHINGTON (JTA) — If there’s overlap between Hillel and the National Council of Jewish Women, it’s in two areas: defending Israel and combating violence against women on campus.

Leaders of the campus Jewish organization took a look at the record of Kenneth Marcus, President Donald Trump’s nominee to run civil rights at the Department of Education, and liked what they saw. NCJW leaders decidedly did not.

Now the groups are on the opposite sides of a nomination that has set off a quiet intra-Jewish argument over what matters more: the hostilities that some Jewish students on campuses say they face for their pro-Israel activity, or the Trump administration rollbacks of Obama-era protections for female students who allege sexual harassment.

Kenneth Marcus, the founder and president of the Louis D. Brandeis Center for Human Rights Under Law, has been at the forefront of efforts to counter pro-BDS activity on campus. He led efforts to get states and federal governments and universities to recognize a definition of anti-Semitism that includes hostility toward Israel.

“Hillel has worked closely with Kenneth Marcus on issues related to anti-Semitic activity and anti-Israel activity on college campuses,” Hillel International said in a statement to JTA. “He has been an excellent partner and collaborative leader on these issues of critical importance to Jewish students. In our experience, he has been a supporter of Hillel’s pluralistic, inclusive values and a leader in fighting discrimination in an analytical and impartial manner.”

Hillel would not address Marcus’ views on federal policy and sexual harassment. Marcus endorses the decision by Education Secretary Betsy DeVos to remove the Obama-era guidelines that advocates said made it easier for victims to level sexual assault charges on campus. The guidelines discouraged universities from allowing an alleged assaulter to directly cross-examine his accuser, and discouraged what until then was the common practice of requiring that the accused and the accuser first attempt to resolve the issue face to face or through mediation.

As leverage, the Obama administration made the rules under Title IX, a law that prohibits federal funding for schools that allow discrimination against women.

Feminists said that before the Obama guidelines, the process revictimized assault victims. DeVos has said that Obama’s rules instead made victims of the accused.

That was the nomination killer for the NCJW, said Faith Williams, the group’s senior legislative associate.

“In light of growing number of #MeToo moments and the scandal at Michigan State University, we need these Title IX protections,” she said, referring to the explosion of sexual assault allegations by women and the recent conviction of a sports therapist at the university who was accused of assaulting nearly 200 women in his care.

Also opposing the Marcus nomination is Jewish Women International, which has developed programs in partnership with Jewish fraternities and sororities to counter sexual assault on campus.

“We are deeply concerned by the answers given during his confirmation hearing last week supporting Secretary DeVos’ rescission of important guidance clarifying the responsibilities of colleges and universities in cases of sexual assault,” Jewish Women International said in a statement last month.

“It is very troubling that he will not commit to continuing to publish the list of colleges and universities currently under investigation regarding sexual assault,” the statement said. “These actions demonstrate a lack of commitment to protecting students from sex discrimination as is required under Title IX of the Education Amendments of 1972, as well as turn back the clock on the advances made during the previous administration to ensure greater transparency and accountability on this issue.”

Hillel has been at the forefront within the community of advancing protections for women on campuses. The group recently made headlines when it backed a Hillel director in Portland, Oregon, who reported that a donor had harassed her; Hillel cut off the donor. In 2016, it suspended a U.S. tour by Israeli author Ari Shavit when he was accused of sexual assault.

In fact, most of the Democratic opposition to Marcus was focused on the sexual assault issue. Some pro-Palestinian groups have made an issue of his anti-BDS activity, but the issue did not come up once in hours of hearings on Dec. 5. The Health and Education Committee’s chairman, Sen. Lamar Alexander, R-Tenn., did read from a letter from Hillel endorsing Marcus at the hearing’s outset.

Among the other issues raised by Democrats were Marcus’ view that the department should only target bias when intent is in evidence, and his past comments opposing LGBTQ rights. (He said he has “evolved” on the LGBTQ issue.)

The American Jewish Committee also has recommended Marcus, despite whatever differences it may have with him on an array of other issues. Its general counsel, Marc Stern, said in an interview that even if Marcus’ pro-Israel record did not come up in the hearing, it has become enough of an issue — The New York Times made pro-Palestinian opposition to Marcus a focus of a story on his nomination — that it is incumbent on pro-Israel groups to rally to his defense.

“It’s our perception that this has become a fight over Israel,” Stern said. “If you take the view that Israel criticism is sometimes anti-Semitic and that’s disqualifying, pro-Israel groups have a hard interest in seeing that it is not disqualifying.”

Rabbi Abraham Cooper, the associate dean of the Simon Wiesenthal Center, said his group might also oppose Marcus on discrete issues, but his position at the forefront of a signature issue for the center — advancing a definition of anti-Semitism that includes some anti-Israel postures — made endorsing him a no-brainer.

“The problems that we have with the history of the [Education Department’s] civil rights division is its failure to in any way, shape or form take seriously kids when they come with complaints of anti-Semitism,” Cooper said in an interview. “Ken Marcus is uniquely qualified to fill that gap.”

“We’ve communicated with Education Department officials in recent years and had to spend a certain amount of time explaining the problem, identifying manifestations of anti-Semitism and explaining that some things they see as political dispute” are anti-Semitism, said Eric Fusfield, the group’s director of legislative affairs. “With Ken Marcus, there’s no need to have that discussion because he authored the book on anti-Semitism.”

(Notably, Jewish Women International, which is an offshoot of B’nai B’rith, has joined with another offshoot, BBYO, in developing anti-harassment programs.)

Marcus is a conservative; he worked in similar civil rights capacities for the George W. Bush administration. An array of right-wing Jewish groups wrote to the committee urging his nomination, among them the Zionist Organization of America, Americans for a Safe Israel and CAMERA.

Decades ago, conservative or liberal credentials would not be a barrier to bipartisan approval. Lawmakers once agreed that a Democratic or a Republican president’s choices should be considered based on their qualifications and only in rare instances ideology. In those days, the AJC’s Stern said, opposition to school integration might disqualify a candidate, but little short of that.

The officials at centrist groups that have endorsed Marcus, like the AJC, the Wiesenthal Center and B’nai B’rith, decried the polarization that frustrated their efforts to increase bipartisan support for Marcus. (The Anti-Defamation League declined multiple requests for comment on the Marcus nomination.) Stern likened liberal opposition to Marcus to a conservative swell against Trump’s decision to extend the appointment of Chai Feldblum to the Equal Employment Opportunity Commission. Feldblum, who is gay, angered the right by backing LGBTQ anti-discrimination measures.

The NCJW’s Williams said coalitions matter and sometimes one heeded allies in decrying what they see as an assault on basic rights.

“As a civil rights community we stand together,” she said. “It is not enough that Marcus would protect the civil rights of one community and not another.”