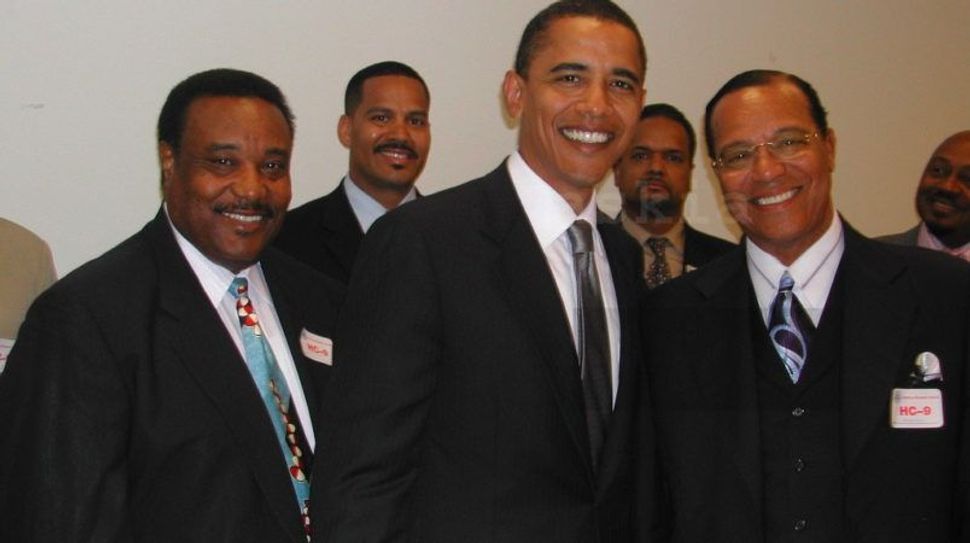 (JTA) — A photo of then-Sen. Barack Obama at a meeting in 2005 with Louis Farrakhan, the virulently anti-Semitic leader of the Nation of Islam, is roiling portions of the Jewish community.

The Anti-Defamation League wants Obama to again denounce Farrakhan. Attorney and pro-Israel activist Alan Dershowitz says he would not have campaigned for Obama had he known about the photo.

Ari Fleischer, a board member of the Republican Jewish Coalition and the one-time spokesman for President George W. Bush, wants to know who invited Farrakhan to the meeting of the Congressional Black Caucus.

Fleischer, now a Fox News personality, has been relentless on Twitter. Here’s an example from Jan. 29:

“Since the press hasn’t covered the fact that members of the Congressional Black Caucus in 2005 met with anti-Semite Louis Farrakhan, I’ll make coverage easier. Here are 21 members of Congress today who belonged to the CBC in 2005. Why not ask them if meeting with anti-Semites is ok?”

Outrage about Farrakhan comes and goes, but when it does flare up, it plays out in familiar ways: Jews are revolted by those who would legitimize a demagogue who would refer to Judaism as a “gutter religion”; African-Americans resent being told with whom they can associate.

I called Askia Muhammad, the journalist who took the photo and said he suppressed it at the request of a CBC staffer he has not identified. He named the CBC members he recalls as being at the event, none of whom is still in Congress. Aside from Obama, they are Charles Rangel, D-N.Y., and Cynthia McKinney, D-Ga. More on them shortly.

I asked Muhammad, now the news director at a Washington, D.C.-area radio station, about the circumstances of Farrakhan’s presence. He said the CBC has a routine Wednesday afternoon meeting at its Capitol Hill headquarters and that its existence is public knowledge. The first few minutes are a free-for-all, with anyone allowed in to schmooze. Muhammad, a longtime newsman for African-American outlets (including at one time the Nation of Islam’s Final Call), said he liked hanging out at the meeting because it was a rare opportunity for unmediated access to the lawmakers.

“It’s a place where it’s unfiltered,” he said. “They don’t have the staff. If you’re in the office, they have a lot of filters and staff people.”

Following the open house, Muhammad told me, the doors would shut and the meeting would go private. It’s his sense — he can’t recall for sure — that Farrakhan and his retinue remained for the closed-door meeting. That would have made Farrakhan an official guest and not just a drop-by.

It’s also Muhammad’s impression — again, he can’t quite be sure — that if the Chicago-based Farrakhan was in town, it was to plan 10th-anniversary commemorations of his 1995 Million Man March. (The Rev. Willie Wilson, who helped produce the 1995 program and served as chairman of its anniversary celebrations, is in the photo along with Farrakhan’s retinue, suggesting that the meeting was about commemorating the march.)

I asked the Congressional Black Caucus about the circumstances of the 2005 visit. Here’s what a CBC official told me:

“The current caucus chair [Rep. Cedric Richmond, D-La.] and his four CBC staff members weren’t around at the time, so we are unable to confirm whether the suppression aspect of the story is true and what the circumstances were regarding Mr. Farrakhan’s attendance. Please note that there is a difference between a member of the CBC and the CBC. For example, if a member of the CBC other than the chair of the caucus at the time asked for the photo to be suppressed, that is a request that should be attributed to that member, not the caucus at-large.”

“Typically guests at the CBC meeting are cleared by the caucus chair and scheduled for a specific date and time. However, sometimes there are unexpected guests. For example, if a member of the caucus has a meeting with someone on the day of the lunch that he or she wants the caucus to meet (e.g. the head of the local NAACP chapter in their district, an actor or actress who is on Capitol Hill advocating for a cause), that member may choose to bring that person to the meeting unscheduled for a quick introduction.”

I contacted the office of Mel Watt, who in 2005 was the CBC chairman and a Democratic House member from North Carolina, and is now the director of the Federal Housing Finance Agency. He declined to comment.

I’ve got calls into Obama, Rangel, the Nation of Islam and Wilson asking how Farrakhan came to be invited to the meeting. (Regarding Obama’s views on Farrakhan himself, a spokesman for Obama pointed out to Talking Points Memo that the former president has on multiple occasions condemned Farrakhan for his anti-Semitism.)

So that leaves two questions: Was Farrakhan formally invited to the CBC, and what does it say about black politicians and the Jewish community?

The likelihood is that he was invited: He was with a substantial retinue and the logistics of schlepping all those folks around Capitol Hill just to say hello for the informal first minutes of a weekly CBC get-together seems unlikely. It also seems likely, given the timing of the meeting and the presence of Wilson, that Farrakhan was invited to discuss marking the 10th anniversary of the Million Man March. Who invited Farrakhan? Was it the CBC as a group? Was it Rangel, McKinney, Obama or another unidentified member acting on his or her own? We don’t know.

It’s also unclear if the photo proves that Obama’s relationship with Farrakhan was cozier than previously acknowledged. Farrakhan may have gravitated to the emerging political star to say hello, Muhammad was in the right place and time, a snapshot ensues.

McKinney, one of Congress’s most strident Israel critics, had a long and contentious relationship with the organized Jewish community.

Rangel, during his long (1971-2017) service as a House member from Harlem, was a go-to congressman for Jews from his city. One of his last acts as a House member, when he was 85, was to fly to Israel in 2016 for the funeral of Shimon Peres. He headlined a 60th anniversary bash for Israel at Harlem’s Apollo Theater and joined an effort to keep anti-Israel activists out of the United States. And when the CBC, furious at Israeli Prime Minister Benjamin Netanyahu in 2015 for sticking it to Obama with a speech in Congress denouncing Obama’s Iran policy, urged a boycott of the speech, Rangel boycotted the boycott and attended. (Dershowitz says it was his call to Rangel that got him to attend, although I’ve heard there was more than a single factor.)

At the same time, Rangel also has a longstanding relationship with Farrakhan, stemming from 1972 when they brokered an end to a deadly standoff between police and Muslims at a New York mosque. And he really resents it when Jews call him out on the relationship.

This is what Rangel told The New York Times in 1985, when Farrakhan was going to speak at Madison Square Garden:

“It’s easy to come down heavy on Farrakhan, but I just hope that this is not coming to the point where, if blacks in South Africa have to carry a passbook to go from place to place, that black Americans have to carry their last statement refuting Farrakhan,” he said. “I would not, if someone said Jesus Christ is a phony, go around asking Jews to sign a statement to condemn him. There is a lot of concern among a lot of blacks that they don’t want to be told what to do, notwithstanding the fact that they probably would have done it anyway.”

Reading JTA’s coverage of the 1995 Million Man March, you can see how broadly that resentment informs the black-Jewish relationship. Blacks who endorsed and joined the march, including Obama, attempted to make clear that they were endorsing Farrakhan’s call for self-empowerment and clean living among young black males, and not his anti-Semitism. Jewish leaders said Farrakhan was too deeply stained with Jew-hatred for that rationale to fly. (No less a figure in uniting Jews and blacks than the Rev. Martin Luther King Jr.’s widow, Coretta Scott King, agonized over whether to commend Farrakhan for saving young black lives or condemn him for his hatreds.)

Muhammad, when I spoke with him on Wednesday, said what many others before him have said: Farrakhan had said “stinging” things about Jews that are “hard to countenance.” But he also wondered why Jews continue to insist on demanding his repudiation: Would it be all right, he asked me, for a black man to ask, “Why isn’t Jewish Voice for Peace the spokesperson for all the Jewish people? Why isn’t Medea Benjamin the spokesman for all the Jewish people? Why isn’t Norman Finkelstein, the son of Holocaust survivors?” JVP supports the boycott Israel movement; Benjamin heads the anti-Israel group Code Pink; Finkelstein have accused the Jews of exploiting the Holocaust to defend Israel.

“How absurd is it that I designate the spokesman for all the Jewish people?” Muhammad said.

But Jewish leaders like Jonathan Greenblatt, CEO of the ADL, remain adamant.

“Over his career, @barackobama has denounced the bigotry of Farrakhan. Time to do so again,” he tweeted. “Leaders always should make sure that there’s no doubt: America is no place for those who advocate #antisemitism or hate.”