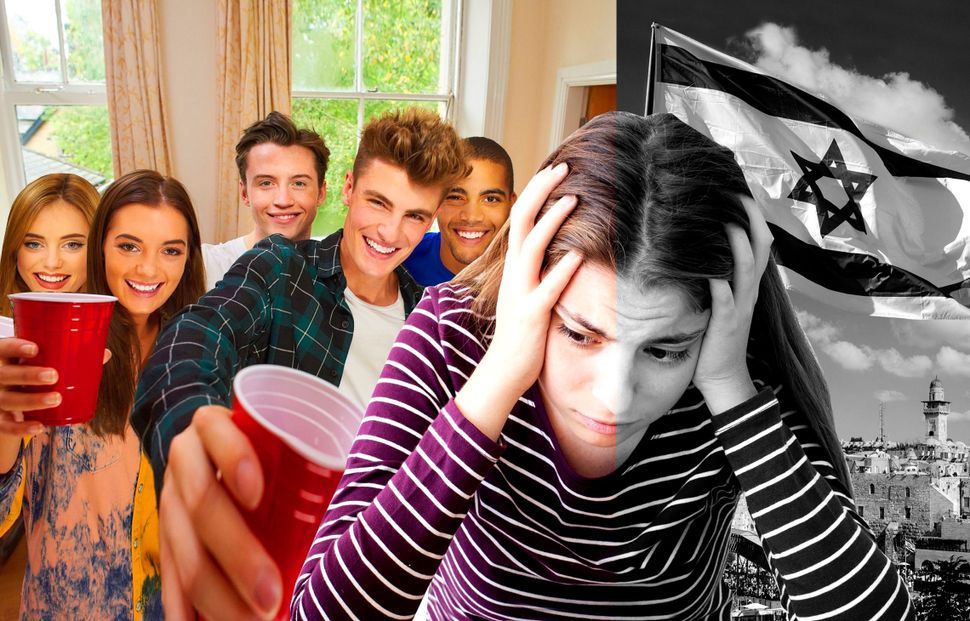 After a long and grueling election campaign, students at Barnard College, one of the most heavily Jewish schools in the country, voted 64%-36% to ask the college to divest from eight companies that do business in Israel.

Students from Jewish Voice for Peace, one of the main backers of the campaign, were understandably jubilant when the landslide results were announced — and they predicted it could lead to similar wins at other schools.

But pro-Israel students, trying to celebrate Israel’s Independence Day while clinging to silver linings, are also looking to party.

“The only thing better would be celebrating in Tel Aviv or Jerusalem. Let’s rage,” the event description says.

“It’s been a very challenging week,” a leader of Students Supporting Israel, Ofir Dayan, told the Forward on Thursday afternoon, citing both the campaign and pro-Palestinian activists’ decision last week to protest deaths in Gaza a few hundred feet from their booth raising awareness of Israel’s Holocaust Remembrance Day.

“This party will allow us to get together and get support from one another,” added Dayan, whose father is the Israeli consul-general in New York.

In the middle of the week-long voting period, student activists had skipped classes to campaign, lobbying potential voters and pasting flyers across campus. Students described to the Forward how draining engaging on such an emotional issue had been for them.

Many pro-Israel Jewish students had what Hillel student president Talia Rubin described to the Forward on Tuesday as “Israel fatigue.”

“They’re exhausted,” she said before the vote. “They don’t want to be bothered by this. They want to do their homework, they want to have a social life.”

“What I have found most upsetting about this referendum is the frustration that it has instilled within members of the Jewish and the broader campus community,” Rubin wrote on Facebook after the election, citing the multiple different views on Israel that Jewish students hold. “It has pained me to see nuanced and thoughtful conversations become a casualty of the hastily introduced referendum,” she added.

The vote was even more noteworthy because pro-BDS students were publicly expressing modest expectations.

“If we get even a third of the vote, that’ll be big for us,” Students for Justice in Palestine organizer Caroline Oliver told the Forward before the vote. In fact, they got nearly two-thirds.

Engagement in the referendum, which also included student government elections, was historically high, the Columbia Spectator reported. Nearly half of all students voted, much higher than the previous voter turnout record of 30.9% set last year.

Of course, this also meant that more than half of all students did not vote — presumably including many Jews at a school that is an estimated one-third Jewish.

Whether that’s due to “Israel fatigue” or other factors is hard to say, Prof. Ari Kelman, the Jim Joseph Chair in Education and Jewish Studies at Stanford University, told the Forward on Thursday.

“There’s a lot of students who for whatever reasons — personal, political, communal, autobiographical — elect not to get involved in campus politics about Israel,” he said.

Pro-Israel students had complained that the language of the referendum, which was written by SJP and JVP, was biased because it alleged that the companies in question broke international law without providing counterarguments. They also were upset that they were not allowed to speak during the student council vote authorizing the referendum, though the pro-Palestinian groups pointed out that they had followed the same procedures as every other group trying to spur a referendum.

According to the Spectator, the student council will vote in closed chambers on Monday whether to side with the victors and formally ask the college administration to divest from the eight companies in question.

No university in the United States has ever actually divested from Israel or companies that do business there in response to student activism, but activists on both sides believe that Barnard could be different. Last year, it became the first college in the country to divest from companies that deny climate change science, in large part because of student activism.

The student government would then send the proposal to Barnard’s 33-member Board of Trustees, which includes vice-chair Cheryl Milstein, whose family foundation has donated to pro-Israel groups like the Jewish Community Relations Council of New York.

However, even in the unprecedented event that Barnard does divest, the college could run afoul of the New York state government. Gov. Andrew Cuomo signed an executive order in 2016 barring state agencies from engaging with any institution or company that supports BDS — which, if it was interpreted to include Barnard, could jeopardize the school’s participation in state financial aid programs, research grants and perhaps even the renewal of its accreditation.

The BDS victory at Barnard comes at a time when campus anti-Israel activity is actually on the wane, according to the Israel on Campus Coalition, a pro-Israel group. They released a report in September claiming that fewer schools debated BDS in 2016-17 than the year before, and that they tracked more than three times as many pro-Israel events as anti-Israel ones nationwide last year.

But students on both sides of the BDS measure at Barnard, one of the country’s most elite schools, predicted before the vote that a victory would embolden activists to attempt other anti-Israel measures there and elsewhere.

“These victories, however symbolic, become the next jumping-off point for further anti-Israel campaigns,” the president of Aryeh, Albert Mishaan, told the Forward on Tuesday.

Oliver made the same point at the time. “If Barnard, the most selective women’s college in the nation, divests, it will influence other schools,” she said.