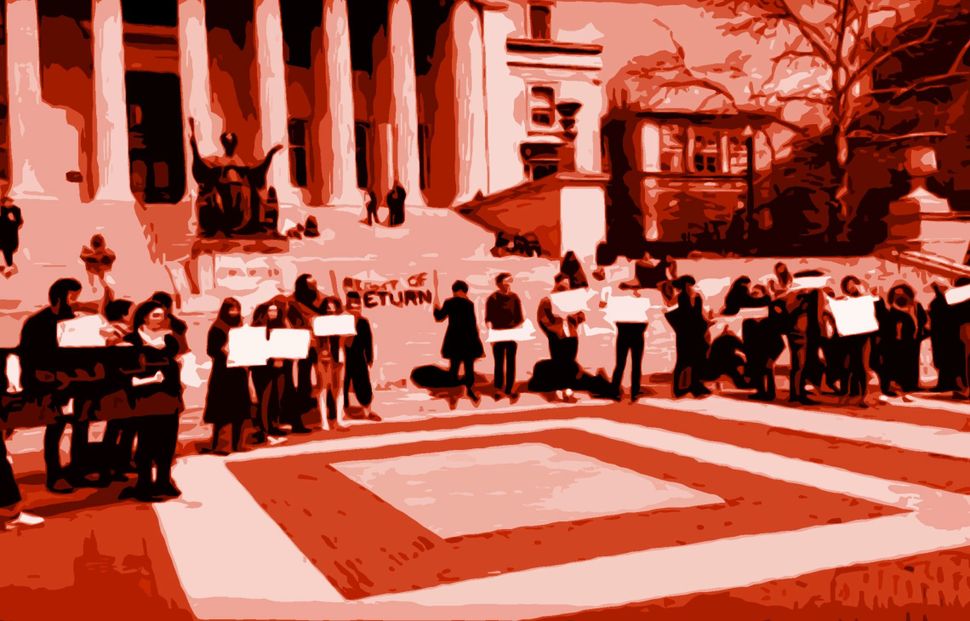 This year, though, is sure to be even more intense than usual: At around the same time, students will find out whether a Barnard College referendum to divest from companies that do business in Israel has passed or failed.

The referendum campaign is the latest campus debate centered on the boycott, divestment and sanctions (BDS) campaign against Israel. It is taking place at what Hillel International describes as the most heavily Jewish school in the country that is not officially Jewish, with 850 Jews making up a full one-third of students. And it has dragged on for weeks, galvanizing Jews on both sides of the debate, with others wishing that the Israel issue could be dropped and everything could go back to normal.

“The campus is so much better when people don’t care about Israel,” a Jewish student leader who asked not to be named told the Forward. The leader said that for students who love Israel, it’s often better to have the Jewish state be more obscure rather than at the forefront of everyone’s mind. In other words: “Make Israel Azerbaijan again.”

The vote, lasting from April 11-18, is open to students of Barnard College, the women’s school affiliated with Columbia University.

The referendum language, which was written by advocates from Students for Justice in Palestine and Jewish Voice for Peace, lists ways that eight companies that do business in Israel, including Hyundai, Boeing and the Israeli national water carrier Mekorot, allegedly violate international law. It then asks voters whether the student government should encourage Barnard to divest from companies that “profit from or engage in the State of Israel’s treatment of Palestinians.”

“It’s very much a numbers game,” student Rachel Meyer told the Forward. The campaign has been “very divisive… It hasn’t contributed to campus life in any way.”

“I wish that campus leaders of BDS would have approached it in a way that would have created a conversation that isn’t ‘yes’ or ‘no,” Meyer said.

The campaign organizers don’t see it that way. “To say that voting ‘yes’ to divest from these companies is a blanket ‘no’ against all of Israel, it’s very reductive,” an organizer for SJP, Caroline Oliver, told the Forward. She pointed out that only two of the eight targeted companies are Israeli, and all of them work internationally.

The campaign at Barnard comes at a time when anti-Israel campus activism is on the wane nationally, according to the Israel on Campus Coalition, a pro-Israel group. It released a report last year claiming that fewer schools debated BDS during the 2016-17 school year than the year before, and that nationwide, nearly three times as many pro-Israel campus events occurred as anti-Israel events.

But Columbia, a highly prestigious school with a large Jewish population, is in many ways perfectly placed to buck that trend.

“Anecdotally it certainly seems that young Jewish anti-Occupation and pro-BDS activism predominantly occurs at small liberal arts colleges and at elite universities, located mostly on the East Coast and the West Coast,” Dov Waxman, a professor of political science, international affairs and Israel studies at Northeastern University, told the Forward in an email.

And Columbia/Barnard graduates involved in Israel politics are poised upon graduation to be highly influential, both in the Jewish community and in general. “Although only a minority of college graduates will remain actively engaged in Israel/Palestine activism [after graduation], they are likely to form part of the future leadership of the American Jewish community,” Waxman explained.

To be sure, even after dozens of student divestment resolutions have passed across the country in recent years, no university has ever actually divested from Israel or companies that do business there.

But as Oliver pointed out, “Just because it hasn’t been done before doesn’t mean it’s not possible.”

Last year, Oliver noted, Barnard became the first college in the U.S. to divest from companies that deny climate change science, thanks in large part to student campaigning. That gives Oliver hope that the school might take actual action if the students vote to divest.

The SJP-JVP alliance had initiated a similar divestment campaign last year, petitioning the student council of Columbia College, the main undergraduate college of Columbia University, to vote in favor of allowing a referendum. That vote failed 26-5.

This year, however, the activists shifted their focus to Barnard, where students say their campus environment and representative government is much more politically active and activist-oriented.

Last year, “one of the major arguments we used was that [the student government] shouldn’t engage in a divisive political issue,” the president of Columbia/Barnard Hillel, Talia Rubin, told the Forward. “At Barnard, that argument doesn’t work, because they see themselves as having a moral imperative of acting.”

When the referendum was announced, both sides quickly began organizing: initiating social media campaigns with specialized Facebook pages and profile pictures; writing dueling op-eds in the student newspaper; posting flyers — though while many posters advertising student health services and upcoming lectures and concerts were visible in Barnard buildings, none mentioned the referendum.

The most important element of the get-out-the-vote campaign, of course, involved students reaching out to their friends.

“We have a Google Doc of every Barnard student we know, and who’s talking to her,” said Ofir Dayan, the external relations chair of Students Supporting Israel at Columbia University.

Spending long hours on such a personal issue have been “emotionally taxing,” the president of the pro-Israel group Aryeh, Albert Mishaan, told the Forward. He added that he had missed multiple classes to concentrate on the campaign.

Many Jewish students who aren’t normally involved in Israel politics have gotten involved. But others have what Rubin called “Israel fatigue.”

“They’re exhausted,” she said. “They don’t want to be bothered by this. They want to do their homework, they want to have a social life.”

The most controversial recent event in this latest campus round of Israeli-Palestinian politicking was last week, when SJP and JVP held a rally, protesting the deaths of 32 Palestinians who were shot by IDF soldiers, on a main campus area a few hundred feet from Students Supporting Israel’s booth raising awareness of Yom HaShoah, Holocaust Remembrance Day.

The protest, attended by about 20 people, didn’t mention the Holocaust – in fact, it took place the day before Yom HaShoah itself. But it still rankled many pro-Israel Jewish students.

“Of course I was appalled,” Dayan said. “I would hope that even they would understand that.”

“The rally held for Gaza had nothing to do with Yom HaShoah,” SJP said in a statement in the aftermath of the controversy, adding, “We expect that any rally for Palestine at any time would have engendered the same apoplectic reaction from far-right Zionists, for whom there is never an acceptable or appropriate day to stand up against the injustices leveled on Palestinians.”

But with the end of the academic year approaching, not everyone is paying attention.

On Tuesday, the day before voting closed, students zipped between classrooms and dining halls on Barnard’s four-block-long thin strip of a campus, bundled up against the wind. Most were too busy to talk for very long. “I’m just really overwhelmed with schoolwork,” a student named Ambar told the Forward. She said that because of her thesis, she hadn’t been focusing on the referendum and didn’t even know when the voting deadline was. Another student, Jennifer, said that the campaign was “something pretty easy to avoid” because “no one I know specifically has a stake in the issue.”

No student was willing to predict the outcome of the referendum. But even though Barnard’s administration is unlikely to actually divest from those companies in the event of a “yes” vote, the symbolism will be important.

“These things do matter, they influence how people think on campus,” Mishaan said. “More importantly, the BDS movement cites these things as an endorsement of its methods.”

“These victories, however symbolic, become the next jumping-off point for further anti-Israel campaigns,” he added.

This point was echoed by Oliver. “If Barnard, the most selective women’s college in the nation, divests, it will influence other schools,” she said.

Whether the college votes to divest or not, Jewish students are concerned that Columbia/Barnard’s reputation for anti-Israel activism will convince prospective students and the broader Jewish community that the schools are unwelcoming to Jews. The school has a Jewish population of more than 1,500 (17% of the total), one of the largest Hillels in the nation and an academic partnership with the Jewish Theological Seminary — it was ranked in the top 10 of the Forward College Guide, as well as the guide’s list of best schools for pro-Israel students. But events like the Yom HaShoah protest and the BDS referendum threaten to overshadow those positive aspects in some corners of the Jewish community.

Every Jewish student interviewed by the Forward stressed how highly they thought of campus Jewish life.