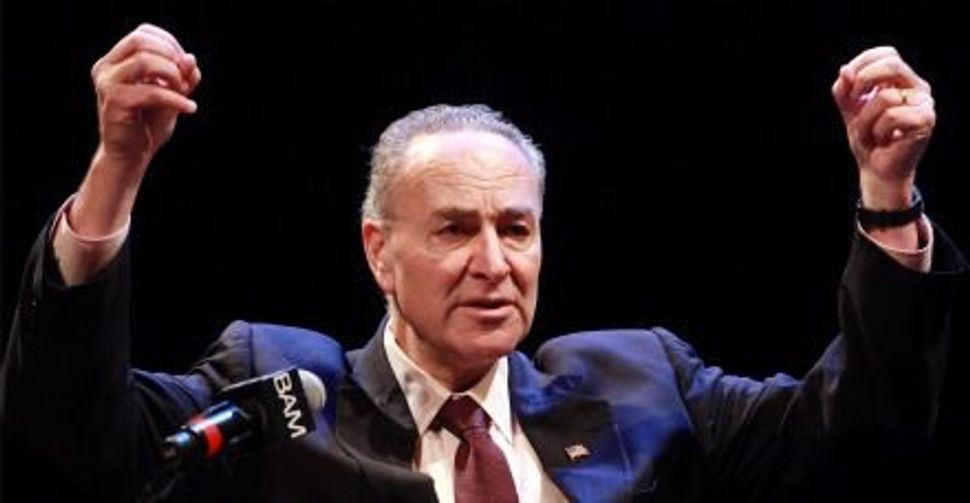 Democrats walk a fine line these days when they reach out to the organized, activist wing of the Jewish community. One side beckons with an ardent, almost scolding reminder of the Jewish mandate to care for the needy. On the other side, an urgent, almost pleading defense of the Democrats’ record on Israel. The danger: Lean too hard toward the social-welfare side, and you risk pushing resentful, wavering centrists into the Republicans’ arms. Let Israel sideline social issues and you alienate the liberals.

And how do you handle Israel? Do you defend the president’s record to hardcore skeptics, or steer clear of him and tout your own stance, as if by contrast?

Most of us never see these mental gyrations up close. That’s what’s so interesting about the annual congressional breakfast of the Jewish Community Relations Council of New York. You get to watch a posse of lawmakers stand up before a room full of skeptical rabbis and community leaders and trot out their best lines while the audience noshes on bagels and lox. As Yogi Berra once said, you can observe a lot just by watching.

For those unfamiliar with the institution, JCRC is a confederation of local Jewish organizations that lobbies City Hall on synagogue zoning and holiday parking rules, works with police on anti-Semitic crimes and dialogues with local church and minority groups. It’s largely funded by UJA-Federation of New York, but the two institutions aren’t alike. UJA tends to be top-heavy with Park Avenue liberals, while JCRC draws more on middle class neighborhoods in Brooklyn and Queens. UJA gatherings are speckled with Armani; JCRC leans toward polyester, liberally sprinkled with black yarmulkes.

For most politicians, the distinction is a bit confusing. Entering an event in the UJA building, they’re never sure who they’re talking to or what the crowd wants — or needs — to hear.

A few politicians work the JCRC breakfast like they own the room, hopping among tables, wisecracking from the podium, drawing easy laughs from the audience. Forty-year House veteran Charlie Rangel of Harlem, New York’s longest-serving congressman and the top Democrat on the Ways and Means Committee, seems to know everyone here. His message: Israel is our most important ally and the Jewish community sets an example for all New Yorkers in commitment to social justice. If anyone present is put off by his ethics scandals, they’re not showing it. He’s a walking, talking, glad-handing lesson in how a politician thrives for decades, how Jewish welfare agencies collect billions in federal aid and how blacks and Jews work together, all rolled into one rotund package.

Senator Chuck Schumer is equally at home and then some. He’s attended these things since he was a young congressman from Brooklyn. As Washington turned conservative, he would joke that he’d always been Conservative. Today he has serious messages. First, on Iran: “Over the past year and a half we’ve learned that economic sanctions really work.” Iran is feeling pressure from its own people. China is meeting with the Saudis to find alternate oil supplies. That’s the administration’s strategy at work — “I have to say this because they don’t get enough credit.” Second, a veiled warning: “What’s going on in Syria is an opportunity to use the crisis in a way that’s smart and weakens Hezbollah, because Assad is worried about his future.” The implication: There’s likely some backroom dealing ahead that will displease the hawks in the short run. Live with it. “It’s important in terms of the survival of Israel.”

Representative Nita Lowey of Westchester is another favorite. The top Democrat on the House foreign-aid subcommittee, she does most of the heavy lifting in preparing America’s $3 billion Israel aid package, as she explains to the crowd. “I am sure that my mother of blessed memory is proud,” she says. This year’s aid bill includes “tough language” to close the PLO’s Washington office if the Palestinians go back to the United Nations for membership. But, she cautions, JCRC is about more than Israel. “You also understand that government has the responsibility to help people ignite the American dream.” That means keeping schools, seniors’ centers and food programs going. “That’s why I’m so proud of our tradition, because in addition to standing up for Israel we understand what tzedaka is all about.” So “when you hear cut, cut, cut,” don’t listen.

The two Republicans in the room seem less at ease. Both freshmen, they’re still learning the language. Bob Turner, who won the special election for Anthony Weiner’s seat, is plainly taking a victory lap this morning. He’s mugging and taking shots at Obama, while the Democrat he defeated, state assemblyman David Weprin, an Orthodox Jew, sits in front of him, glaring. Turner boasts that he’s been to Israel twice, “which I think is two more than — never mind, that would be partisan.” (Obama was there in 2008, but never mind.) He says Congress has “given the president a great deal of authority” to pursue a peaceful resolution with Iran, which “the Iranians may see as an opportunity to buy time.” He gets grave nods, but no applause.

Nan Hayworth, a physician from upstate Mt. Kisco, announces that she’s “proud to be a good Jewish mother,” having “raised two Jewish sons” and shown she can “run a bris” while remaining a Lutheran. It’s not clear how that goes over in this particular crowd. She speaks of her bipartisan spirit, boasting that she’s “actually tied for fourth for voting with President Obama on a number of issues,” which doesn’t rouse the crowd either. She was in Israel recently and heard from Prime Minister Netanyahu about the “madness” of the Iranian regime. “The passion that drives me forward,” she says, “is the love of liberty.” She’s saying the right things, but her tone is off.

In the end, the speeches that grab the crowd are the ones that combine strong defense of social services with detailed warnings about Iran or Hamas. The morning’s most passionate defense of social spending comes from Carolyn McCarthy, a Long Island Democrat best known for gun control (she entered politics in 1993 after a gunman on the Long Island Rail Road killed her husband and crippled her son). “Everybody is always one paycheck away, one illness away from their lives changing forever.”