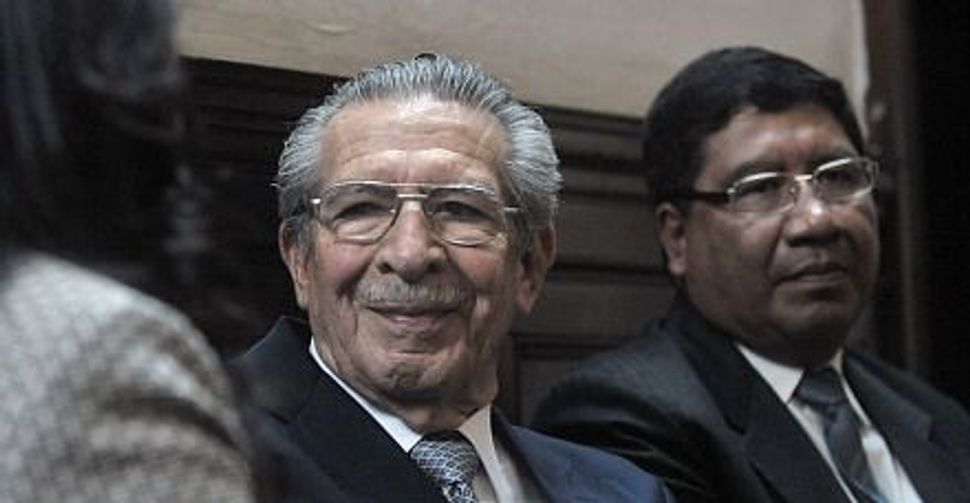 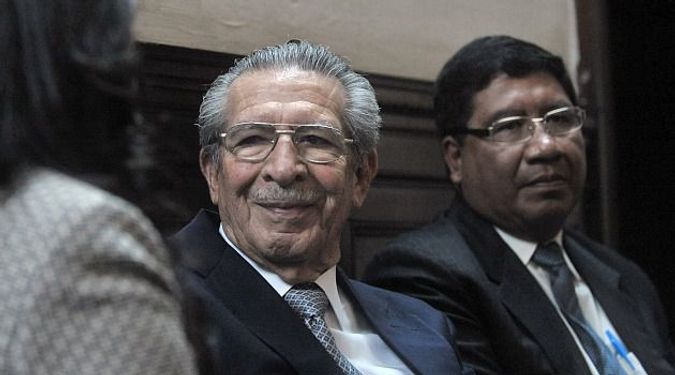 Lesser-Known Deniers: Holocaust denial is a well-known phenomenon. But what about those, like Guatemala?s ousted dictator José Efrain Ríos Montt, who deny genocides that are less commonly recognized? Image by getty images

Like the Holocaust itself, Holocaust denial is a well-known if often misunderstood phenomenon. In its most naked form, it denies the historical fact that during the Nazi period, Germans, helped by many other Europeans such as Ukrainians, sought to kill the Jews of Europe and managed to slaughter roughly 6 million of them. In somewhat less brazen forms, it denies not the Germans’ perpetration of the Holocaust in its entirety, but merely central aspects of it, such as that they used gas chambers or that they killed a number close to 6 million Jews. In a still somewhat more attenuated form, Holocaust denial practitioners say little about the events themselves or about the Germans or others who slaughtered Jews, and instead attack survivors or scholars, calling them frauds when they seek nothing more than to tell the truth about what happened.

Holocaust denial consists of more than outright denial of the Holocaust. It includes a variety of attempts to cast doubt on, cover up and confuse people about the Holocaust, in essence to falsify the history of this period and to fabricate a fictitious version, because it serves many people in diverse ways, primarily politically, to have such a fictitious history become accepted. Defenders of the name and honor of Germans or of Ukrainians or other Europeans, anti-Semites, enemies of Israel, propagandists of many stripes and sensibilities, all see the truth about the Holocaust to be inimical to their agendas. In this sense, the original name that the Holocaust deniers gave themselves, “Holocaust revisionists,” is correct insofar as they used a variety of strategies, many of which were not outright denial, to revise (albeit falsely) the understanding of the Nazi period and what the Germans and others did to Jews.

If Holocaust denial is the best-known and most widely practiced form of genocide denial, it is neither the only one nor the oldest. Already this year, in the span of just a few days at the end of January, we saw a few potent examples of the pushback against those who would try to bury the memory of mass murder. The French legislature criminalized the denial of the Turks’ genocide of the Armenians in World War I. A few days later, a Guatemalan judge ruled that the country’s former dictator, José Efrain Ríos Montt, the mastermind of much of the genocide of 200,000 Mayas in the early 1980s, must face trial, despite the hegemonic denial movement in Guatemala. The International Criminal Court in The Hague also ordered a trial for several of the Kenyan political organizers of the postelection eliminationist assault that in 2008 took the lives of more than 1,000 people and expelled from their homes and ruined the lives of 600,000 more — violence that Kenyan leaders have falsely insisted was simply spontaneous, local and ethnic flare ups. And Baltasar Garzón, the Spanish judge who had exercised the controversial legal doctrine of universal jurisdiction against mass murderers, was himself put on trial in what may be a political vendetta for his having investigated the routinely denied crimes of Francisco Franco’s dictatorship, responsible for the death of perhaps 200,000 Spaniards during the middle part of the 20th century.

Whatever their differences, these events are each responses to, or the expression of, attempts to deny the large-scale mass murder and eliminationist assaults that took place in each of these countries. Every denial movement is organized and led by political leaders, often at the helm of a state, who place enormous obstacles to the truth being told or to justice done. Denial movements cast doubt on, and confuse people about, the Hutu mass annihilation of Tutsi in 1994, the Serbs’ genocide of Bosniaks in the former Yugoslavia from 1992 to 1994 and, in China, the colossal mass murders perpetrated by the communists under Mao Tse-tung.

The Turks’ denial of their slaughter of 1.5 million Armenians is the oldest, most consistent and, probably, most effective large-scale genocide denial phenomenon. It differs from Holocaust denial in that Turkey has actually criminalized telling the truth about the genocide, and the Turkish state, whether under military or civilian, secular or religious leadership, has continuously made falsifying this history a central foreign policy stance, threatening and sanctioning and influencing countries and individuals (including scholars) who would otherwise speak the truth about it. Germany, for all its shortcomings, serves as a model of honesty for its political leaders and elites, in acknowledging the past, in its media’s extensive treatment of Holocaust themes, in its educational system’s instruction and in making amends with the survivors. While Germans have all been confronted repeatedly with the truth about their countrymen’s perpetration of the Holocaust, most Turks have been fed lies by their government, have never been exposed to how their countrymen exterminated Armenians and believe that claims about the genocide are merely attempts to blacken Turkey’s name.

Survivors of all genocides say the same thing: We want the truth told. We want people to know what happened so that it will not happen to others. I heard this again and again from survivors around the world when working on my film “Worse Than War,” including in Guatemala, where survivors also called for Ríos Montt to be put on trial. When I interviewed Ríos Montt for the film, he defiantly said, “If I was responsible, I would be in jail,” implying that his freedom proved his innocence. Now his claim rings even hollower. Now his surviving victims may get their wish. Now the powerful denial movement in Guatemala, which for decades obscured even the basic facts of the genocide, should be powerfully counteracted.

We should honor the survivors’ wishes everywhere for truth and justice, and this means that, whatever the momentary political costs, we must insist that the truth be told about all genocides, the Turks’ murder of the Armenians included. Those who fail to do so perpetrate a moral and human scandal, and cast a bad light on themselves and others when they rightly condemn and combat Holocaust denial.

Daniel Jonah Goldhagen is the author of “Worse Than War: Genocide, Eliminationism, and the Ongoing Assault on Humanity,” which is the basis of a PBS documentary of the same name. His work can be read at goldhagen.com