In South Dakota, Putting Guns Where They Don’t Belong 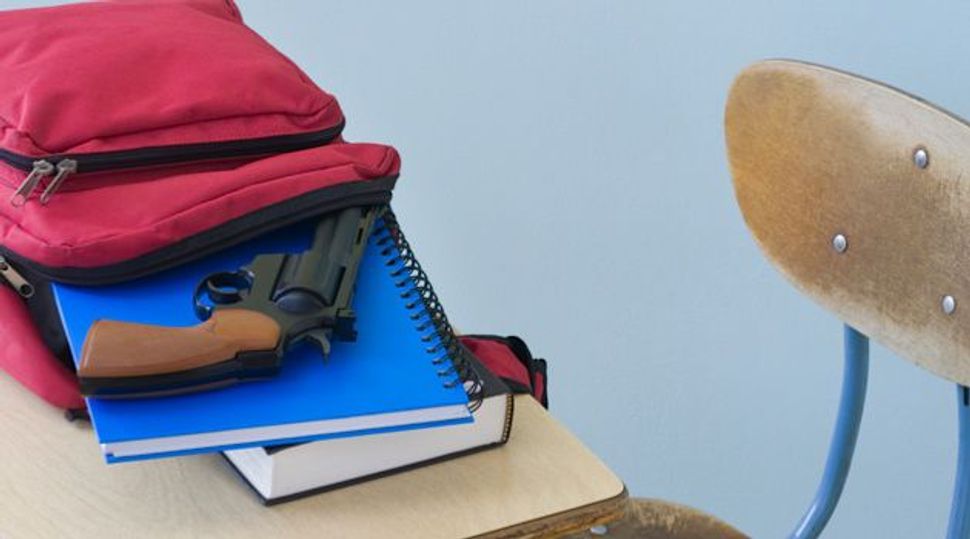 Given the broad reach of the Forward’s digital offerings, we’re hopeful that maybe some readers in South Dakota will see this editorial. Whoever does read it, we ask that you consider a few questions before sending your child to school.

Our request is prompted by the fact that South Dakota has just become the first state in the nation to specifically allow teachers to carry firearms into the classroom. Other states allow adults to have loaded guns in school with written permission, and about one-third of the nation’s public schools have armed security guards, but the wise men and women in the Mount Rushmore State went further by establishing the “school sentinel” program. It is a real program. The science teacher can’t just willy-nilly bring a loaded rifle to chem lab. That teacher first has to complete the “school sentinel training course.”

So at the next back-to-school night, in addition to asking annoying questions about how much time students really should spend doing homework in the first grade, we suggest that parents demand to see the teacher’s training course certificate. Just to be sure.

And ask where that gun is being stored. With the advent of this legislation, signed March 7 by Governor Dennis Daugaard, it’s now important to know whether desk drawers in all the state’s K-12 schools have proper locks. Or will guns be tucked away in supply closets with crayons and textbooks, away from prying little hands? Parents need to know.

It occurs to us that a gun-toting teacher ought to have pretty good shooting skills, lest something go amiss at the next armed school invasion. How will he or she be tested? Will parents see that report card? Teachers also need to be adept at what they call in kindergarten “remembering.” After all, in January, an armed security guard at a Michigan school hired in response to the Newtown massacre left his gun unattended in the school bathroom. Whoops. Don’t want that happening all around the great state of South Dakota.

Fortunately, lawmakers in Pierre were sensitive to the fact that not every teacher wants to pack heat, so they stipulated that “no individual teacher or other school employee may be censured, criticized, or discriminated against for unwillingness or refusal to carry firearms pursuant to this Act.” What a relief.

Also: School boards can’t be sued if they refuse to enact a school sentinel program. That, too, is a relief, since it is possible that educators in South Dakota, many of whom reportedly oppose this measure, would realize that since owning a gun substantially increases the risk that someone will die at home, the same could be true if guns were regularly brought to school.

Where they do not belong.

In South Dakota, Putting Guns Where They Don’t Belong