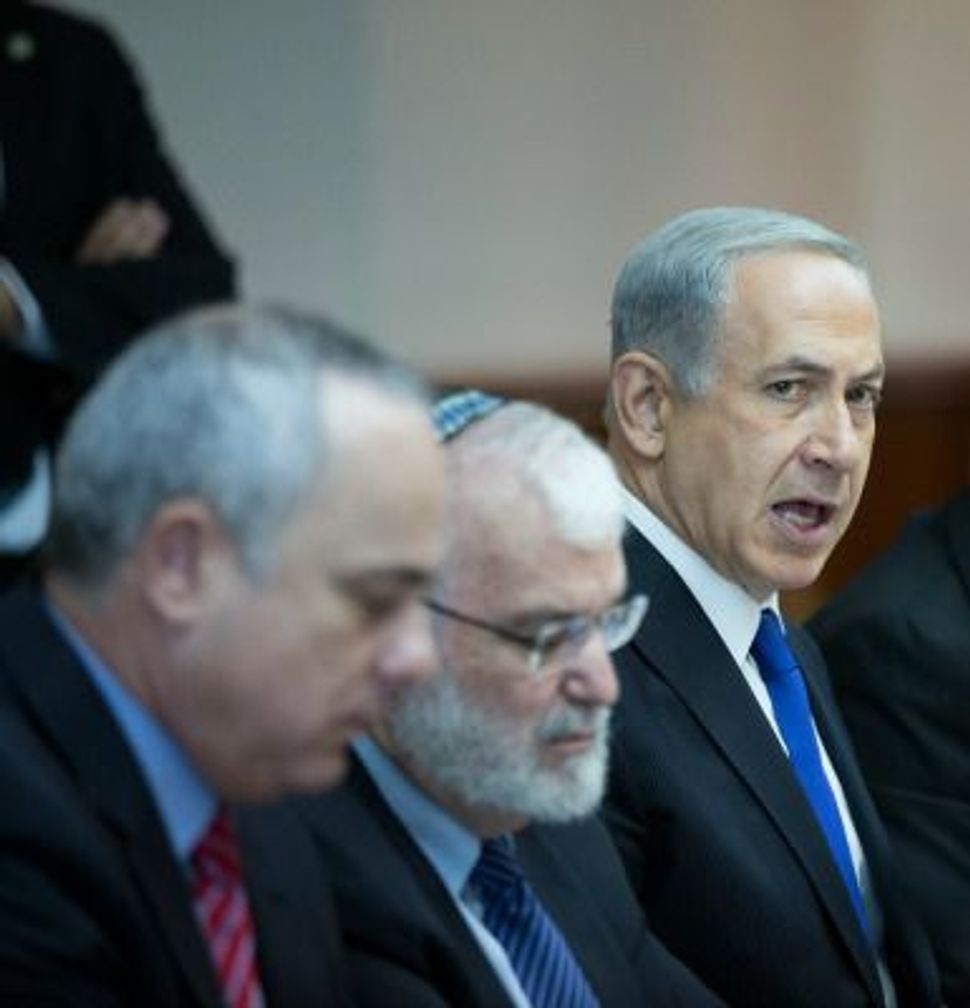 A day before Secretary of State John Kerry’s expected arrival in Israel to further peace talks, Israeli news media are reporting that Kerry has begun preparing an American peace plan to present to the parties in January as a basis for negotiations, if there isn’t progress by then. It will reportedly be based on the pre-1967 armistice lines with land swaps, and will be linked to the Arab Peace Initiative.

Zahava Gal-On, head of the left-wing Meretz party, made the claim in a public statement Monday morning, saying she heard it during meetings with American, Palestinian and Arab officials in recent days. Several news organizations confirmed it with unnamed sources later in the day.

The daily tabloid Maariv reported, quoting a source “close to the negotiations,” that Kerry formulated his plan after his seven-hour meeting in Rome with Israel’s Prime Minister Netanyahu October 23 “sobered him up” to the realization (מעין התפכחות) that Netanyahu “had his own considerations” and that a permanent peace agreement “wasn’t attainable as he had thought.”

According to The Hill newspaper in Washington, Kerry told reporters in Saudi Arabia he “categorically” denied the “rumors” and that there was no plan other than face-to-face negotiations “at this point in time.” A State Department spokeswoman later called it “wild speculation.”

Netanyahu responded to the reports in remarks to the Likud Knesset caucus later in the day, saying Israel would look at any proposal raised in negotiations but “but we won’t accept any external dictates and no pressure will help.”

The daily Israel Hayom, considered a strong supporter of Netanyahu, reported that Kerry and Netanyahu drew maps for each other in Rome, and that Netanyahu’s map:

is surrounded on all sides by areas under Israeli sovereignty, is demilitarized, and preserves for Israel the greater Jerusalem area and the Jewish settlement blocs. The Palestinians, for their part, are thought to be unwilling to give up a state that does not stretch to the Jordan River, nor will they agree to not control the northern Dead Sea area.

In the days leading up to Kerry’s latest visit both Israel and the Palestinians were ratcheting up their hardline rhetoric, digging in their heels in advance of what is expected to be stepped-up pressure to move toward each other. On Saturday, according to the Saudi Gazette, the Palestinian Authority’s ministry of information put out a statement calling the Balfour Declaration, the 1917 British government statement recognizing Zionist claims to a homeland in Palestine, “a crime against humanity” and calling on Great Britain to “apologize” for it. Saturday was the 96th anniversary of the declaration, the first international recognition of Zionist aims.

The next day, during his weekly Sunday Cabinet meeting, Netanyahu reiterated his frequent claim that Palestinian refusal to recognize Israel is the “root of the conflict.” And on Monday, Palestinian leader Mahmoud Abbas declared at a meeting of the Fatah Advisory Council that Israel’s insistence on announcing new construction in the territories in “an equation” with its agreed prisoner releases would doom the talks and “explode the situation.”

Israel issued tenders on Sunday for construction of 1,700 new housing units across the 1967 Green Line, in what was widely described as compensation to the right wing of the coalition for the controversial release of 26 Palestinian terrorism convicts on Wednesday.

Netanyahu has insisted since taking office in 2009 that the Palestinians’ formal declarations of willingness to live peacefully alongside the state of Israel, going back to 1988, are insufficient, and that the Palestine Liberation Organization must recognize Israel “as the nation-state of the Jewish people,” something Palestinian leaders have refused to do. His view that the Palestinian refusal to take that step indicates an unwillingness to end the conflict is not shared by Israel’s intelligence agencies, which have argued nearly unanimously for more than a decade that Palestinian willingness to accept Israel as a fait accompli is genuine.

The prime minister’s view that Palestinian refusal is the root of the problem received two more blows over the weekend. On Friday, former Shin Bet director Yuval Diskin, who has been an outspoken critic of Netanyahu since leaving office in 2011, publlshed an op-ed essay in Ynet, the website of Yediot Ahronot, reiterating his view that Netanyahu and his current coalition make a peace agreement impossible and outlining his ideas of the steps needed to reach an agreement. He wrote that time has almost run out for an agreement, and that the alternative is permanent conflict.

In a more serious blow to the prime minister, his outgoing national security adviser, retired Major General Yaakov Amidror, told the Cabinet on Sunday (here and here) that if the peace talks fail, Israel will face a sharp increase in international isolation and economic sanctions from Europe and other key partners. This was Amidror’s last report to the Cabinet before he steps down as adviser after two and a half years. When he was appointed in 2011 he was considered a reliable hard-liner. He was among the highest ranking Orthodox officers ever to serve in the military and had been a fellow at the right-wing think tank Jerusalem Center for Public Affairs before joining the prime minister’s staff.