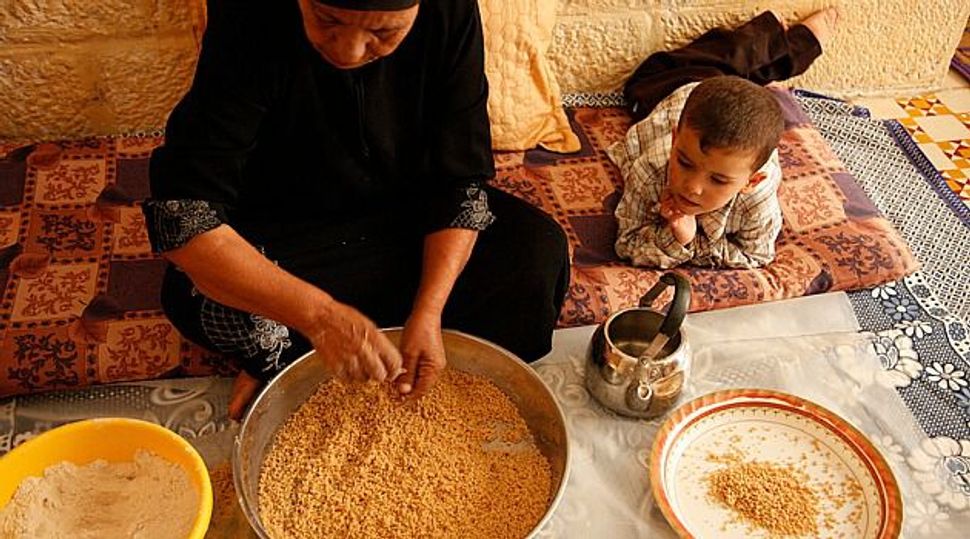 Cuisine of a People: Siham Khaled Mustafa rolling maftoul, or Palestinian couscous, at her home in the village of Dayr Balut. Image by Ariana Lindquist/Saveur

Jews and Arabs appaerently still can’t work out terms for a mutually acceptable nation for the Palestinian people.

But Saveur, an upscale food magazine, has it all figured out.

Throughout an opulently photographed feature headlined “Heart of Palestine” in Saveur’s December issue, writer Nancy Harmon Jenkins — who’s written cookbooks on the Mediterranean and Italy — matter-of-factly refers to Palestine as a country. By doing so, she’s taking an unusual step into volatile political territory for a magazine which usually stresses over grilling the perfect steak or truffle-hunting.

“Hemmed in on all sides by an opposing state, Palestinians’ small piece of the world consists of two discontinuous areas: The Gaza Strip’s 25 miles of coastline in the southwest and the Delaware-sized West Bank along the River Jordan in the northeast,” she writes. “In both areas, Palestinians continue to struggle to assert their rights to the land. Amid dangerous conflict, people find hope in the rituals of daily life, none more so than the growing and preparing of traditional foods.”

Jenkins spends a few days in a village called Beit Sahour with Fairouz Shomaly, “the best cook in town, according to everyone I’ve asked.” Shomaly instructs Jenkins on making sfiha, the Palestinian flatbread; maqloubeh, “a layered dish of rice, meat, and vegetables” that dates back to 13th-century Baghdad; and the Palestinian couscous called maftoul.

The rapturous prose about food gets punctuated by a pointed (and eminently disputable) history lesson. “Throughout its history, this valuable land has seen its fair share of conquests… but after the British mandate was terminated in 1948, the land was carved up into Israel and Palestine, the boundaries of which remain in dispute,” she writes.

In a statement to the Forward through a publicist, Saveur stood by the story.

“At Saveur, we are interested in the human story of a place through its culture and cuisine, and this feature was no exception. We are respectful of sensitivities on this issue, so we thought carefully about it,” said Betsy Andrews, executive editor of Saveur. “As of 2012, the United Nations refers to the areas covered in our December article as Palestine, and thus we have followed suit. For the historic references in the story to the area between the Mediterranean and the Jordan River, we employed the historic name for the area, which is also Palestine.”

For her part, Jenkins told the Forward that she found questions about her use of Palestine “odd.”

“I suppose politics begins with the local so in that sense perhaps the piece is a political statement. As for referring to Palestine throughout, the piece is, after all, about Palestinian cooking and Palestinians cooking, so I don’t think it’s a stretch to refer to Palestine,” she wrote in an e-mail.

The story’s not yet available online. But it’s not the first time Saveur’s landed in hot water for a “Palestine” reference.

In 2012, a falafel recipe praised “Palestine’s parsley-heavy chickpea versions” of the chickpea patty. A commenter called “JudyEpstein” took writer Felicia Campbell to task for the reference. “The implication of her statement is that this is from the country of Palestine. There is no country of Palestine. Her reference should have stated the Palestinian version referring to the people of Palestinian origin. She should use her head note as a description of falafel, not a political statement relating to the politics of the Middle East,” the commenter wrote.

Saveur has also covered Israel reliably as a culinary destination, including dispatches from Jerusalem’s Mahane Yehuda and a report on the Galilee by writer Gabriella Gershenson.