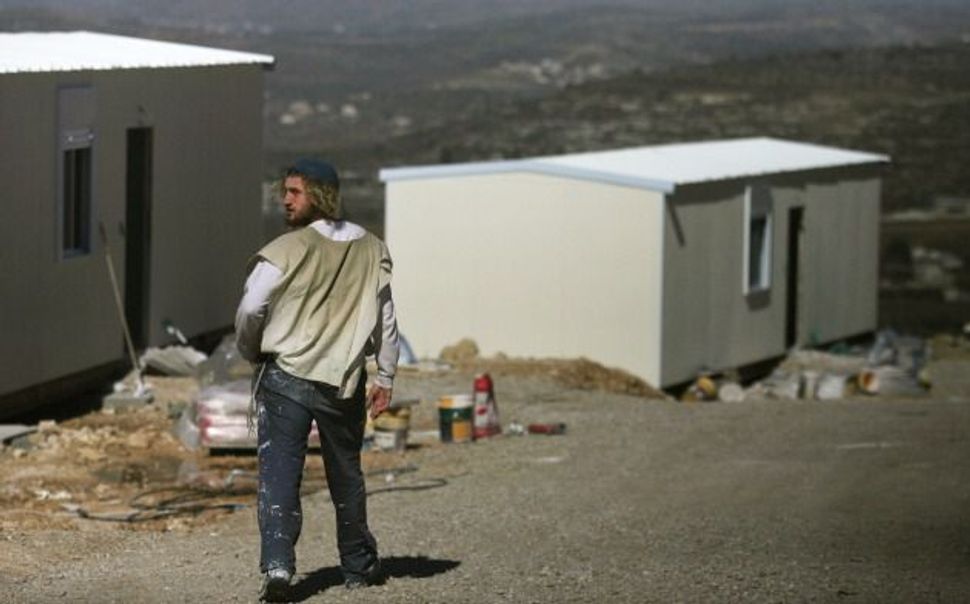 The settler movement and its right-wing Knesset allies are finding they’ve got their hands full swatting back demands from the center and left — an unusual alliance of Labor, Yesh Atid and Tzipi Livni’s Hatnuah — for transparency in the World Zionist Organization’s Settlement Division budgets. Committee chairmen from the right, meaning Likud Beiteinu and Jewish Home-Bayit Yehudi, have been forced to resort to a series of slimy parliamentary moves to keep the Settlement Division’s budget and operations under wraps.

Among other things, the maneuvering shows that the center-left that opposes new settlements has a voting majority in the Knesset and its committees. The only reason there’s a right-wing government under Bibi Netanyahu is because of Yair Lapid’s decision to join with Jewish Home and Naftali Bennett on domestic issues rather than form a center-left peace coalition.

The latest maneuver was a decision by the chairman of the Knesset Finance Committee, Nissan Slomiansky of the settler-dominated Jewish Home-Bayit Yehudi party, to cancel a planned vote on a requested 177 million shekel ($51 million) allocation to the Settlement Division, after Slomiansky figured out the allocation was headed for rejection, Haaretz reported.

Lawmakers from two coalition factions, Yesh Atid and Tzipi Livni’s Hatnuah, had indicated that they were going to join with the opposition parties to oppose the allocation, which totaled 177 million shekels ($51 million). Stav Shafir of the opposition Labor Party had demanded before the vote that the Settlement Division be required to report to lawmakers on its budget and activities before receiving further funding.

Justice Minister Livni has been pressing in recent months for legislation bringing the settlement division under the authority of Israel’s freedom of information law. The division is currently exempt. A bill that would have given her the authority to require disclosure — in compliance with a Supreme Court ruling — was defeated in the Knesset’s constitution, law and legislation committee after committee chair David Rotem of the Yisrael Beiteinu faction brought it to surprise vote with only one other committee member present, Shuli Muallem Refaeli of Jewish Home-Bayit Yehudi.

The Settlement Division, nominally a department of the nonprofit, Diaspora-controlled World Zionist Organization, is the Israeli government’s designated subcontractor for construction and infrastructure in new communities, mostly in the West Bank. The WZO’s governing bodies, which represent a range of Israeli and Diaspora organizations from Likud and Shas to the American Reform movement and B’nai B’rith International, have no control over the budgets or activities of the Settlement Division, despite their nominal ownership of the body. At the same time, because the division is technically owned by a private, Diaspora-led organization, it is not bound by the rules of transparency that apply to government institutions.

The arrangement allows the government to develop new settlements in the West Bank without acknowledging involvement or disclosing the extent of its involvement, as the Forward reported in 2005. Moreover, because the subcontractor is a Diaspora-led body that rarely challenges Israeli government authority — and most of whose members are unable to read the division’s Hebrew-language literature — the division is essentially free of close oversight of any sort.

Strikingly, the WZO’s highly detailed English-language website, which is aimed heavily at promoting Zionism and Israel identity among Diaspora Jews, has almost no information on its Settlement Division page. Visitors seeking further information are directed to the Settlement Division’s own website which, unusually for a website of a Diaspora-owned institution, is in Hebrew only, with no English version.

The assignment of responsibility for West Bank settlement to the WZO settlement division was one of the most important and least noticed features of the 1971 “reconstitution agreement” that separated the WZO and the Jewish Agency into two distinct organizations, ostensibly because the 1967 Six-Day War had created a groundswell of interest among Diaspora donors in tracking their donations to Israel via the Jewish Agency. Under the reconstitution, the Jewish Agency became a partnership between the WZO and federated Diaspora philanthropies that funded it. However, Agency insiders have acknowledged that interest among Diaspora donors in the workings of the organization was virtually nil for the first decade after reconstitution. That changed only in the mid-1980s, when the Reform movement began pressing through the Agency-WZO complex for recognition and funding of its institutions in Israel.

Historically the Jewish Agency and the WZO were two names for the same organization. The name Jewish Agency was originally coined for the WZO’s Jerusalem operations office under the terms of the 1922 League of Nations Mandate for Palestine. In 1929 the WZO created an “Expanded Jewish Agency Executive” that coopted a handful of wealthy American donors who were unaffiliated with Zionist politics but wanted to assist in developing the Jewish homeland. The effort was short-lived, but it later became the basis for a mythical alternate history, promoted following the 1971 reconstitution, under which the Jewish Agency had been created in 1929 as a partnership between the Zionist movement and non-Zionist Diaspora philanthropies.