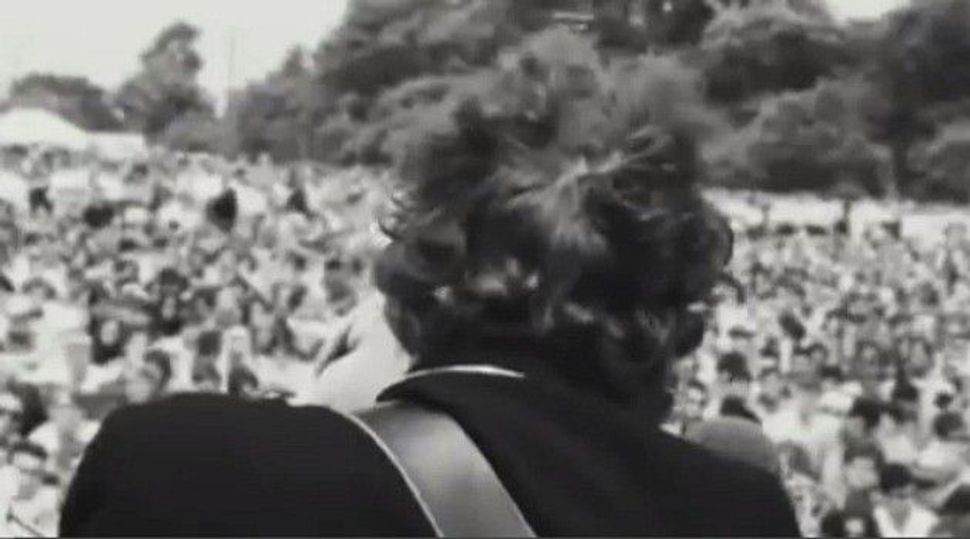 There’s a lot to tell. Tradition teaches that the Exodus was a long night, and so is the Seder. So I’m putting it up in two parts.

First up: a quick recap of the Passover story, as retold in this unusual version of the gospel classic “Oh Mary, Don’t You Weep (‘coz Pharaoh’s Army got drownded).” It’s performed by the Soul Stirrers, gospel group where Sam Cooke got his start:

Next, of course, comes “Go Down Moses.” This song has many, many unforgettable versions, but for my money there are none as powerful as this one from Preston Sturges’s 1941 film, “Sullivan’s Travels.”

It was a tough choice: I was strongly tempted to go with the unparalled classic version by Paul Robeson. I lovethis up-tempo one by the great Golden Gate Quartet. And this swinging version by Louis “Satchmo” Armstrong is a gem. All well worth a listen. But for sheer emotional power, none brings you to tears like the one below.

Background: Sullivan, a Hollywood film mogul who’s gone bumming to see the real America, gets arrested and put on a Southern chain gang. In this scene the prisoners brought to see a movie in a nearby black church. The pastor and lead singer is Jess Lee Brooks.

The Haggadah tells of four rabbis who were sitting all night in Bnei Brak recalling the events of the Passover, until their students came and said, Masters, it’s time for the morning prayers. Some commentators suggest that they were actually plotting their own liberation—the Bar Kochba rebellion against the Romans—and the students’ message was code for “make like you’re praying, the Romans are coming.” If so, here’s what that all-nighter might have looked like, from “Monty Python’s Life of Brian.”

The Magid — the portion of the Seder that retells the events of the Exodus — reaches an early emotional climax with the passage “Vehi she’amda la’avoteinu velanu” (“And that which stood firm for our ancestors and for us — for not just one enemy rose against us to destroy us, but in every generation they rise up to destroy us, and the Holy One, praised be He, saves us from their hand.”)

Here’s “Vehi She’amda” and the paragraphs that follow, sung by the great Cantor Moishe Oysher and choir. Even if it’s not your style, take a taste. There’s none better.

The exodus isn’t just an ancient story. In living memory the Jewish people were brought from a house of bondage to redemption in the land of Israel. Most didn’t make it, and those who did had to sneak across a much wider sea than Moses crossed, in an operation that would have tested Joshua. I speak of the pre-state Aliya Bet. Here’s their song (and one of my all-time favorites), “Bein Gvulot” (Between Borders) sung by Hillel Raveh. “Between borders, over impassable mountains, on dark, starless nights, we bring convoys of our brethren to the homeland. For the young and tender we will open the gates. For the old and the weak we are a protecting wall.”

And of course, the climactic moment when Moses stood on the Red Sea shore, “smotin’ that water with a two-by-four,” in the words of the old spiritual sung here by Bruce Springsteen and the Seeger Sessions Band.

After the sea closed in on Pharaoh and his army, we’re told, Miriam led the women in a song of thanksgiving (Exodus 15:20). Here’s the late and much-missed Debbie Friedman celebrating that moment in “Miriam’s Song.”

Liberation and resistance come in many forms. On the night of the first Seder in 1943, 71 years ago, the youth of the Warsaw Ghetto began their month-long uprising against the Nazis. The news of the revolt inspired a young poet in the Vilna Ghetto, Hirsh Glick, to write the Yiddish poem that became known as the Partizaner Lid or “Partisans’ Song,” also known by its opening words, Zog Nit Keynmol — “Never say you’ve gone down your final road” (lyrics in Yiddish and English here).

This is one of the greatest performances of that song. Paul Robeson gave a concert in Moscow on June 14, 1949, broadcast live throughout the Soviet Union. He had met days earlier with his friend Itzik Fefer, the great Yiddish poet who was imprisoned by the Soviets and would later be executed. Fefer told Robeson that their mutual friend the Yiddish actor-director Solomon Mikhoels had been secretly murdered the year before by Stalin’s police. Robeson decided to close the concert with Zog Nit Keynmol, which he dedicated to Fefer and “to the memory of Mikhoels,” whose death had been kept secret until that moment. Along with Golda Meir’s visit to the Moscow synagogue the previous Rosh Hashana in 1948, the Robeson concert was one of the seminal moments in the rebirth of Soviet Jewry.

This is the live recording. Listen to the emotion in his voice, and hear the audience erupt when he’s done.

The Haggadah tells us that in each generation we must see ourselves as if we had personally come out of Egypt. The fight for freedom is never over. Here are a few songs of the eternal struggle.

Bob Dylan and friends at the Newport Folk Festival, 1963: “Blowin’ in the Wind.”

Pete Seeger and the Almanac Singers, “Which Side Are You On?” Written in 1931 by Florence Reece, whose husband, United Mine Workers organizer Sam Reece, was a leader of the union struggle in the coal mines of Harlan County, Kentucky. Reece targeted by Sheriff J.H. Blair and mineowner strongmen and barely escaped.

“Standing Before Mt. Sinai,” the stirring song of the 1956 Israel-Egypt war. “It’s not a fairy-tale or passing dream, my comrades. Here before Mt. Sinai the bush still burns. And it burns in the song in the mouths of brigades of young men, before the gates of the city, in the hands of the young Samsons. Oh, the flame of God in the eyes of youth, in the roar of engines. This day will yet be retold, of how the people stood again at Sinai.”

Had enough? Here’s Dayenu (“It Would Have Been Enough”), in an excellent bluegrass rendition:

And a reimagining of Dayenu in a parody of Cee Lo Green’s “Forget You,” sung by the Fountainheads of Ein Prat yeshiva.

At last, the meal. Here’s Second City Television’s madcap version of the Passover meal, starring Eugene Levy as the father, Joe Flaherty as the reverend and, sitting next to Flaherty, the late Harold Ramis as the elder son.