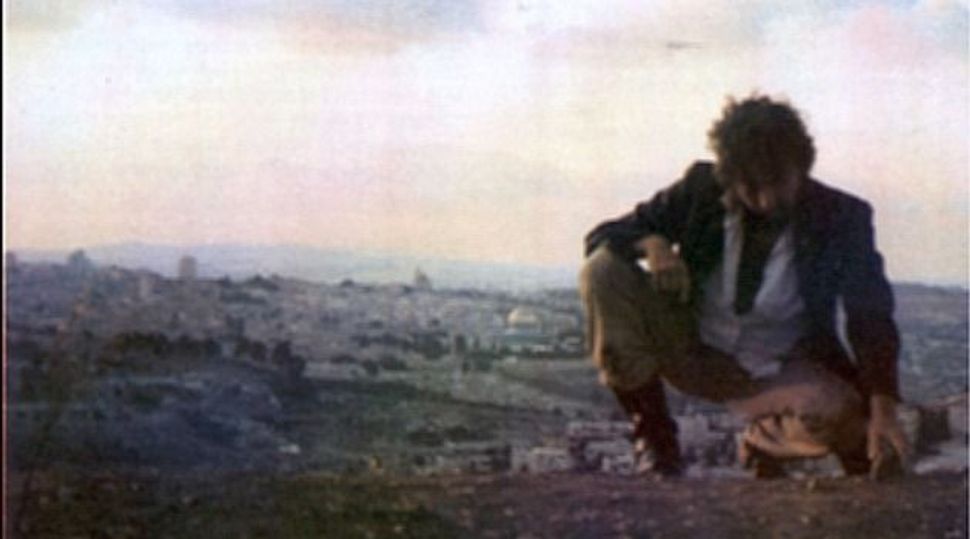 In honor of Bob Dylan’s 73rd birthday on Saturday (May 24), Maariv asked four Israeli singer-songwriters — Eran Tzur, Sun Tailor, Dan Toren and Uzi Ramirez — to write about the “defining moment” in Dylan’s influence on them personally “as musicians, artists and listeners.” Each brief contribution is accompanied by a musical clip that the artist chose to accompany his words (yes, they’re all “he”).

The article is here (Hebrew only). I’ve translated some excerpts, which I’m posting along with the clips they picked and links to a few selected clips by the contributors themselves. (The above photo, by the way, was taken by his ex-wife Sara in Jerusalem, where they were celebrating their son’s bar mitzvah at the Kotel. It appears on the inner sleeve of his Infidels album.)

Besides his being one of the great musicians of all time, Dylan has established himself as a symbol of freedom and equality, of independent creativity and thinking outside established frameworks.

In the summer of 1998 I was headed out for a long vacation on tropical island in southern Thailand and I took along Dylan’s new album Time Out of Mind, which had come out a year earlier.

I’d been on a long timeout from Dylan, and this captured me all over again. I remember trying to write under his influence. I came up with a song, “Blues for the North,” that follows the blues chord pattern of his “Highlands,” which closes the album.

“You’re Gonna Make Me Lonesome When You Go.” The first time I heard it was on a train from Cambridge to London. I fell in love with it. It put words to what I was feeling then, in real time.

Dylan speaks of a love that comes to him after years of disappointment and longing, and he’s deep within a beautiful tale and yet finds himself thinking about the heartbreak that’s coming soon.

It’s amazing how it’s possible to write a song about love in the present that suddenly becomes a song of mourning for the future, and make it all sound so right and real.

“Finally, Bob Dylan in Israel. On Tuesday, June 20, 8:30 p.m., Bob Dylan, one appearance at Ramat Gan stadium.” It was 2011, two months before Amichai Katz lost his long battle with cancer at age 36. It had attacked a year earlier while he was working on his doctorate in history.

Katz — everyone just called him “Katz” — was known to music lovers as the man who started and for eight years ran the Syndrome bar in Jerusalem.

Katz loved Dylan. He’d dreamt of seeing him live, bought a ticket to one of his shows while he was undergoing treatment in the States, but he was too sick to make it. When his Israeli appearance was announced, his wife Shulamit called Castel and asked if she could buy two tickets and bring her husband on a stretcher. The girl in the ticket office asked us to wait, then came back and said they were invited, that they’d bring the ambulance in through a special gate. And so we met them there, and he listened while lying on his gurney, surrounded by his musician friends.

(Incidentally, here is what I wrote about the Ramat Gan concert at the time. I enjoyed the evening a lot more than my article lets on — I was trying, as I usually do, to report my perceptions of the broader mood, not to express my own feelings.)

Amichai Katz sings a song he composed to words by Hanoch Levin, “In the Heart of the Sea There Lies an Island”:

Hear Uzi Ramirez sing his own hit “Bodean,” his “Talking A-Bomb Blues” and Woody Guthrie’s “Do Re Mi.”

I remember the day I first got hooked on Dylan. I was driving with my brother to the Kanyoter in Nes Tziona to see “Wayne’s World,” and on the way he put in a cassette of Dylan’s album Desire. Somewhere between “Mozambique” and “Joey” it got into my blood. I couldn’t wait for the movie to end so I could get back the car and keep listening.

Every song, like a short movie, tells a story and brings you inside from the first moment, and Bob’s voice cuts you deeper with every syllable. It was a short distance from there to buying all his albums along with a harmonica and neck brace and learning the songs.

One of the things I love about him is the ability and need to keep changing his songs. I saw him a few years ago and he was still playing with the words and tunes of songs he’d written 50 years ago. Besides that I learned a lot of new music thanks to him, people like Woody Guthrie, Pete Seeger, Ramblin’ Jack Elliott, [Rev.] Gary Davis and lots more greats.