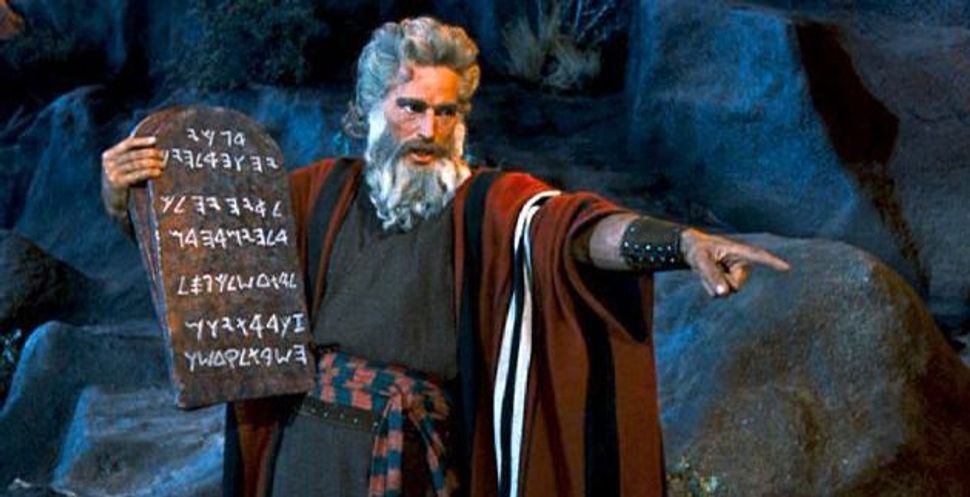 The festival of Shavuot begins tonight. You all know what that means: time for a little holiday music. Herewith a mix of Peter Paul & Mary, Shlomo Carlebach, Shoshana Damari, Bob Dylan, some Ladino sacred cancon, some 1950s doo-wop and lots more, including a snippet of Mel Brooks.

The holiday comes seven weeks after Passover (hence the name Shavuot, or “Weeks”) and traditionally marks the day that the children of Israel, newly freed from Egyptian bondage, stood before Mount Sinai as a free people and received the Book of the Law, the Torah. In a way, it’s the birthday of the Jews as a nation of laws. So it has a special association with books and learning. In the Reform movement it’s the day of confirmation, or graduation from religious school.

It’s also Chag HaBikkurim, the Festival of First Fruits, celebrating the spring harvest. In the culture of modern Israel, especially in the kibbutz movement, the holiday is associated with songs about the land and the harvest.

I’m also throwing in a few songs about journeys in the desert. That’s a theme that’s more associated with Sukkot than Shavuot, but I like these songs.

First, to get us in the mood, here’s Peter, Paul and Mary singing the old spiritual, “Go Tell It on the Mountain.”

Now for a treat: We happen to have some live footage of the climactic moment when Moses received the Tablets of the Law and presented them to the people. Just kidding. Actually, this is Mel Brooks’ imagining of that moment, from his 1981 movie “History of the World, part I.” That’s Mel in the role and robe of Moses.

Here’s Avraham Fried with a marvelous Hasidishe version of “Torah Tziva Lanu Moshe” (“Moses commanded the Torah to us”). If you’re pining for the more familiar children’s ditty, click here.

It’s no secret that some of us aren’t satisfied with the traditional answers and continue to wonder where the book actually comes from. Here are The Monotones from 1958, asking that very question: “I Wonder Who Wrote the Book (of Love)”:

Speaking of mountains, this is Reb Shlomo Carlebach singing “Esa Einai El Heharim” — “I will lift up my eyes to the mountains, from whence cometh my help.” The words are from Psalm 121. The music is Shlomo’s.

Here’s a gorgeous Ladino song, “Hi Torah Lanu Nitana” (“She Is the Torah, Given to Us”), sung by the group known as Flor de Serena with Vanessa Paloma singing lead.

I can’t think of an American tune that better captures the mood of graduation and precious books more poignantly than “Roses Are Red,” recorded in 1962 by Bobby Vinton:

The Book isn’t simply a book, of course. It’s a biography of a nation, its birth and its turbulent relationship with its Maker. And its a book of laws. That’s always been the hardest part. We were freed from slavery to the Egyptians only to be brought before a thundering mountain and told we have to serve Somebody Else. Bob Dylan tells it straight in this 1979. It was written during his surprisingly brief Christian period, and is performed here in 1998, during his Chabad period.

Continuing our theme of questioning and rebellion, here’s a great song from 1966 that might just capture the mood of the Israelites as they stood at the foot of the mountain and wondered what they’d gotten themselves into: “I Fought the Law (and the Law Won).” It was written in 1958 by guitarist Sonny Curtis, later of Buddy Holly’s Crickets. This version is the classic by the Bobby Fuller Four.

We come to the songs of harvest and first fruits. The best loved Shavuot harvest song is probably this one, “Saleinu Al K’teifeinu” (“Our baskets on our shoulders, our heads garlanded, we come from the ends of the land bringing first fruits”).

If there’s a second-place first fruits song, it’s probably “Shibolet BaSadeh” (“Stalks of grain in the field, bending in the wind, weighted down by their seeds…”). This version is sung by the South African folksinger Miriam Makeba.

This next one isn’t especially associated with Shavuot, but I include it because it’s one of my favorite old songs of the field, and one of the great folk dances of all time: “Hora Mamterah” (“The dance of the sprinkler”). It’s sung here by the late Shoshana Damari, justly known in her day as the Queen of Hebrew Song. You’ll see why.

Now for two desert songs. The first is “Orcha BaMidbar” (“Caravan in the Desert”), perhaps better known by its opening words, “Yamin uSmol” (“Left and right, just sand and more sand…”). The announcer opens by telling us that this was a poem by Yaakov Fichman that was set to music in 1925 by the then-15-year-old David Zehavi, who went on to compose the music for the Palmach Hymn and Yatzanu At, and who happens to be in the audience (camera cuts to old fellow smiling shyly). Although he composed some of Israel’s classic anthems, he made his living as the electrician at Kibbutz Na’an, just across the back fields from Gezer.

This is an American desert song, appropriately titled “Desert Blues.” It was written by the great Jimmie Rodgers, the Singing Brakeman, and is sung here by Leon Redbone.

We’re getting near the end. In October 1956 the children of Israel returned to Mount Sinai under rather changed circumstances. This song was written (lyrics here) days before Israel’s troops moved into the peninsula in a joint campaign with Britain and France. It was recorded on the spot by Lahakat HaNachal, the Nachal Brigade musical troupe.

Finally, another version of “Go Tell It on the Mountain,” this one in reggae style, performed by Peter Tosh and The Wailers.