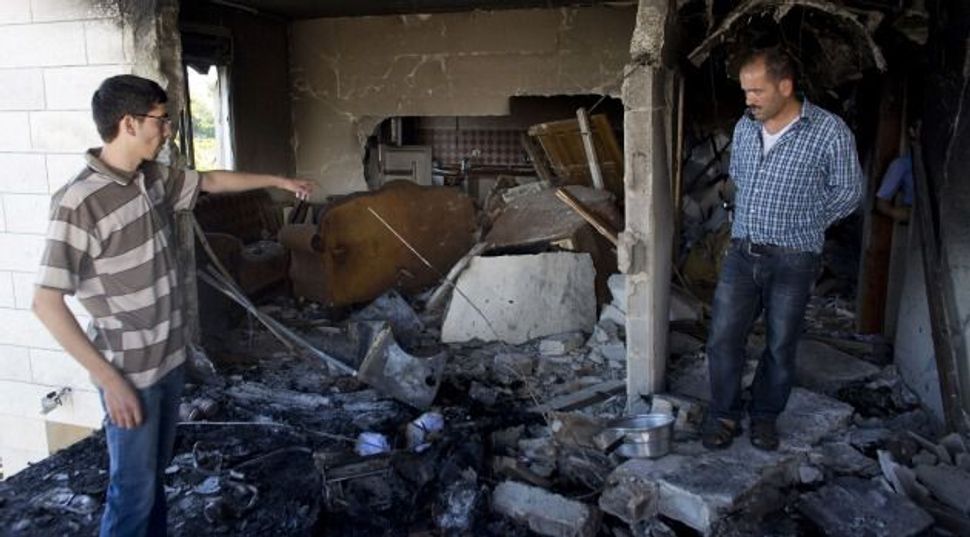 Mourners at the fresh grave of Naftali Fraenkel, one of three Israeli teens murdered, allegedly by members of the Hamas-linked Qawasmeh family of Hebron. / Getty Images

Now that the bodies of the three kidnapped Israeli teenagers have been found and laid to rest, the crisis is rapidly turning into a wickedly complex, five-sided tug-of-war with enormous stakes on all sides. One axis pits hawks against doves inside Israel, with cries from the public for revenge backed by right-wing cabinet ministers while the military, backed by government doves, urges cautious, calibrated measures, to avoid an escalation into war. Prime Minister Netanyahu is caught in the middle, immobilized by indecision.

The debate erupted into angry verbal confrontations at security cabinet meetings on Monday and Tuesday, reaching a climax at one point when IDF chief of staff Benny Gantz praised the cabinet for adopting a temperate set of counter-measures that avoid escalation into full-scale war. In reply Gantz received a tongue-lashing from economics minister Naftali Bennett of the Jewish Home Party, the cabinet’s strongest advocate of harsh measures. Bennett angrily told Gantz he had no authority to “critique” the ministers’ actions.

The second line of tension is a tug-of-war between Netanyahu and Palestinian Authority chief Mahmoud Abbas over Abbas’s month-old unity pact with Hamas. A Hebron-based Hamas cell is believed responsible for the kidnap-murders, and Netanyahu is demanding that Abbas break off ties with the Hamas leadership in response. Abbas is holding off, deterred by doubts over the involvement of Hamas leaders — Hamas officials in both Gaza and Damascus continually deny any involvement or knowledge — and by popular pressure from below not to be identified too closely with Israel. But Israel anger and Hamas recalcitrance may leave him no choice.

The third and perhaps most significant line of confrontation is the growing tension between Hamas leaders in Gaza and Damascus and the local Hamas organization in Hebron. The Hebron organization, dominated by one of the city’s oldest and largest clans, the Qawasmehs, has effectively operated for more than a decade as an independent franchise within the fundamentalist movement, and frequently as a radical opposition force and spoiler. The Shin Bet has identified Marwan Qawasmeh, 29, and a family hanger-on, Amer Abu-Eisha, 33, as the kidnappers of the yeshiva students.

Several detailed accounts of the Qawasmeh family’s alleged spoiler role in Israeli-Palestinian cease-fire efforts have appeared in several Israeli and international publications in the last day, claiming, based on Palestinian and Israeli intelligence sources, that the clan staged the kidnapping in order to sabotage the Fatah-Hamas unity pact and reignite armed conflict.

One account appeared in the English-language Al-Monitor news site, written by Shlomi Eldar, a former West Bank correspondent for Israeli television and now a researcher at the Woodrow Wilson Center in Washington. More detailed accounts appeared in Hebrew in two conservative Israeli outlets, including a lengthy piece by Eldar on the Jerusalem Post’s Hebrew website, The Post, and another in Maariv by military affairs reporter Assaf Gibor.

Both Eldar and Gibor describe a series of incidents in 2003 and 2004 when the Qawasmehs repeatedly sabotaged cease-fires between Israel and Hamas by staging spectacular terror attacks, each time provoking Israeli retaliation and on several occasions getting senior Gaza Hamas leaders killed. The Gush Etzion kidnap-murder appears to be a the latest in the pattern, coming two weeks after the Fatah-Hamas unity pact that was supposed to include a Hamas cessation of terror attacks.

The Qawasmeh clan has an estimated 10,000 members living in and around Hebron, a city of some 250,000. Clan lore traces its lineage back to the prophet Mohammed. The vast majority of clan members are not involved in the family terror franchise.

During the 1970s, in the early years after Israel’s capture of the West Bank, Qawasmehs figured prominently in moderate Palestinian leadership. A family-owned gift shop in the Old City of Jerusalem served as an early gathering place for Israeli and Palestinian peace activists, and one member, Eid “Eddie” Qawasmeh, spoke frequently before Israeli audiences about possible coexistence between Palestinian and Jewish nationalism.

Another member, Fahd Qawasmeh, was mayor of Hebron from 1976 to 1980, and together with several other mayors was an early advocate of a two-state Israeli-Palestinian peace plan. He was exiled to Lebanon in 1980 following a terrorist murder in Hebron and was quickly made a member of the PLO executive committee. He was assassinated in Amman in 1984. The perpetrators were never identified.

After the founding of Hamas in 1988, a different wing of the Qawasmeh clan rose to prominence. The first Israeli press reports on the Qawasmeh terror organization began to appear in 2003 and 2004, after a string of family members became head of Hamas in Hebron and died, one after another, in armed confrontations with Israeli security forces.

The first indication of the Qawasmehs’ intractable independence came on August 19, 2003, when a family member and an associate staged a suicide bombing on the Number 2 bus line in Jerusalem, killing 23 Israelis including seven children, the youngest aged 3 months. The bombing effectively ended a cease-fire that had begun three months earlier, in June, when Hamas agreed to a halt in terrorist attacks at the insistence of the newly appointed Palestinian Authority prime minister Mahmoud Abbas. According to Eldar, the Qawasmehs ordered the bombing in defiance of Hamas orders in retaliation for the deaths of two local Hamas operatives in a shootout with Israeli troops on August 10.

Israel responded to the bombing with the aerial assassination in Gaza of Hamas’s Number 3 leader, Ismail Abu Shanab, who was known as the head of the organization’s moderate wing and the strongest advocate of the cease-fire and opponent of suicide bombings. Hamas formally declared the cease-fire ended two days later.

The following spring Israel assassinated Hamas’s Number 1 and Number 2 leaders, Sheikh Ahmed Yassin and Abdel Aziz Rantisi. At that point, according to Eldar, Hamas secretly sent a message to Israel via Egyptian intelligence minister Omar Suleiman, asking for a truce: no more assassinations of Hamas leaders, no more Hamas attacks on Israelis. Sharon at that point had begun preparations for the Israeli withdrawal from Gaza that would take place in August 2005, and Hamas wanted peace and quiet to establish its future base of operations there. The cease-fire went into effect in May, according to Eldar, and held for months, despite continuing terror attacks by other Palestinian factions. In August, two Qawasmeh family members blew up a pair of buses in Beer Sheva, killing 16 Israelis and foiling another cease-fire.

According to Gibor, Hamas leaders have been trapped in their cycle of destruction with the Qawasmehs by an unwritten rule that bars top leaders from condemning any attacks on Israelis. The result is that they are unable to effectively separate themselves from the actions of their uncontrollable subordinates. At the same time, they have been afraid to lose the support of the large, wealthy Qawasmeh clan, with its deep roots in Hebron, the West Bank’s most religiously devout city.

Now, however, Hamas appears to face a do or die choice. The condition of the unity pact is that Hamas ends terror attacks and agrees to enter a Fatah-led government that will continue to seek a peace agreement with Israel. Hamas is free to disapprove of the negotiations and campaign against an agreement if it’s ever reached — just as the Jewish Home Party disagrees with Netanyahu’s stated goal of reaching a two-state agreement with the Palestinian Authority — but it is expected to respect the decisions of the majority.

The pact doesn’t require Hamas to admit openly that it has accepted any of those conditions, as long as it doesn’t violate them in practice. But the Qawasmehs appear determined to force it to make that choice.