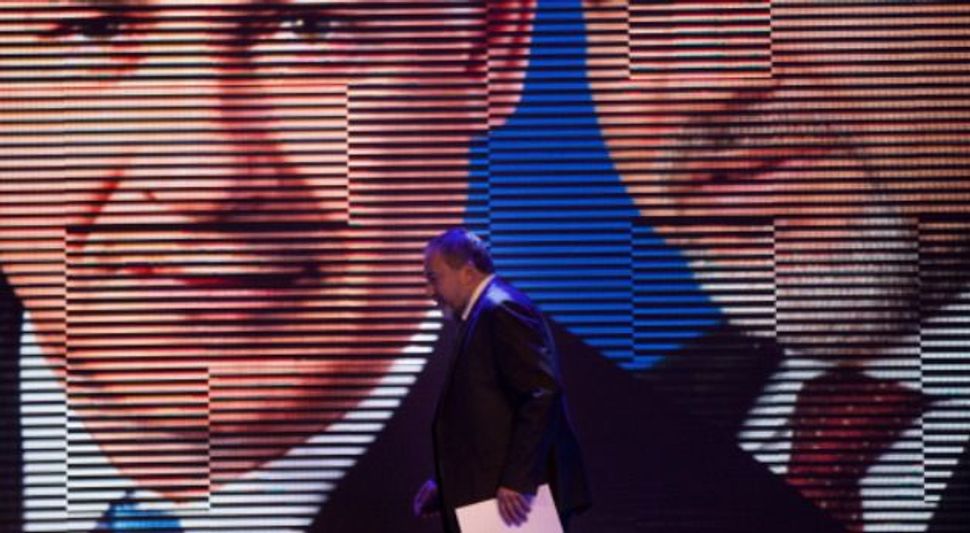 Israeli Foreign Avigdor Liberman announced today that he was pulling his Yisrael Beiteinu party out of its electoral alliance with Benjamin Netanyahu’s Likud. The two combined forces in a joint electoral slate in advance of last year’s Knesset elections, but never merged the two parties into a single organization.

Liberman isn’t taking his party out of Netanyahu’s governing coalition, he told a press conference this morning. Nor is he quitting his job as foreign minister. Still, the split of the erstwhile Likud-Beiteinu alliance into two separate Knesset caucuses leaves Netanyahu in a precarious position, commanding just 20 lawmakers in his 68-member coalition.

Liberman’s split with Netanyahu comes after days of increasingly harsh squabbling over policy toward Hamas. Liberman has repeatedly called for the government to step up its attacks on Hamas, including a reoccupation of Gaza on the scale of Operaiton Defensive Shield in 2002. On Saturday, appearing in the southern city of Sderot, he slammed as “unthinkable” and “a serious mistake” Netanyahu’s offer to Hamas of a restored cease-fire, or “quiet in return for quiet.”

The dispute reached a climax at the weekly Sunday cabinet meeting, where Netanyahu and Liberman traded insults while ministers on the right lined up with Liberman and Netanyahu’s strongest support came from his usual critics to his left, including Yair Lapid, Tzipi Livni and environment minister (and onetime Labor Party chief) Amir Peretz.

Netanyahu now heads a coalition of five parties in which his own Likud, nominally the governing party, holds a plurality only by the narrowest margin. Of the coalition’s 68 lawmakers (in the 120-member Knesset), 20 belong to the Likud, 19 to finance minister Yair Lapid’s Yesh Atid, 12 to economy minister Naftali Bennett’s Jewish Home, 11 to Liberman’s Yisrael Beiteinu and 6 to justice minister Tzipi Livni’s Hatnuah.

Moreover, Netanyahu could lose even that slim plurality if any member of his party were to leave the Knesset for any reason. For example, Liberman has talked in recent weeks about appointing Carmel Shama-Hacohen, a Likud backbencher, to be Israel’s ambassador to the OECD and UNESCO. If that happens, he will be replaced by the next person on last year’s Likud-Beiteinu candidate list, Alex Miller of Yisrael Beiteinu. That would increase Liberman’s Knesset strength to 12 seats, equal to Bennett’s, and reduce Netanyahu’s to 19, equal to Lapid’s.

Moreover, leaving the foreign ministry, one of the three top cabinet posts after prime minister (the others are defense and finance), in the hands of the second smallest party in the coalition is likely to cause serious grumbling down the road, especially with Bennett.

In fact, the entire structure of the cabinet falls under a cloud and opens the door for serious rebellion in the ranks. As currently composed, Bibi’s Likud-Beiteinu bloc holds 13 of 23 ministers’ seats in the cabinet (compare to 31 of 68 seats in the coalition). Those break down to 8 seats for Likud and 5 for Yisrael Beiteinu. The other coalition partners: Yesh Atid, 5; Jewish Home, 3; and Livni, 2. Following the Likud-Beiteinu breakup, Likud will hold 8 ministers’ seats for its 20 Knesset members. Yesh Atid will hold 5 ministerial seats for its 19 Knesset spots. Yisrael Beiteinu will hold 5 cabinet seats for its 11 members, and Jewish Home will hold 3 cabinet seats for 12 lawmakers. It’s hard to see Lapid and Bennett putting up with that for very long. On the other hand, it’s hard to see how Bibi can govern if his party holds a minority of seats in a cabinet that’s so sharply divided on just about every issue.

Chairman Yitzhak Herzog of the opposition Labor Party responded to Liberman’s announcement by telling his Knesset caucus that the government was on its way to collapse. He called on Lapid and Livni, as he’s done regularly in recent months, to leave the coalition and join with him in a “major political move” that would present the public with a “real alternative.”

An exit by Lapid and Livni would leave Netanyahu without a majority in the Knesset and force new elections, unless he — or somebody else — could assemble a new majority in the current house. Netanyahu is said to have been preparing for such a possibility by holding private contacts with the two Haredi parties, Shas and United Torah Judaism. Replacing Lapid and Livni with Shas’s 11 seats and United Torah Judaism’s 7 would give Netanyahu a shaky majority of 61 seats in the 120-seat house, barely, enough to survive. However, adding the two seats of Shaul Mofaz’s rump Kadima party would give him a slightly more comfortable 63. More important, it would give him a coalition without the deep ideological divisions of the current one.

Herzog’s options are fewer. If he could get Lapid and Livni to join forces with him, they would have a combined 40 seats. Adding the 6 seats of the left-wing Meretz party would give them 46. Theoretically, therefore, the left with 46 seats outnumbers the 43 seats of the right-wing parties, Likud, Yisrael Beiteinu and Jewish Home. The balance of power thus belongs (leaving aside the 11 seats of the Arab-based parties, which neither side would bring into a coalition) to the 18 seats of the Haredi parties. And, as it happens, they have no clear ideological position either way on the seminal peace-territories-settlements issue that coheres the other two blocs. In fact, Shas under the renewed leadership of Arye Deri is closer to the views of the Labor Party than the Likud.

On the other hand it’s all but inconceivable that Lapid would agree to join forces with the Haredi parties, which oppose his deeply held commitments to secularism, in order to advance a peace process about which he is personally skeptical.

If, on the other hand, Herzog did manage to woo the two centrist parties out of the Netanyahu coalition and force new elections in the process, it’s not at all clear that the new-found partners could come to any agreement on who would lead their liberal alliance — Herzog, who considers himself heir to leadership as head of the once-mighty Labor Party? Lapid, with the largest bloc of Knesset seats but no record as a national leader? Or Livni, former foreign minister, minister in charge of peace negotiations and resoundingly unsuccessful vote-getter?

Then again, in a tangle of such bewildering complexity, it’s usually the smartest maneuverer in the room who comes out on top. And according to one of the most seasoned (not to say battered) outside observers of Israeli politics, Martin Indyk, the smartest person in Israeli politics is Avigdor Liberman.