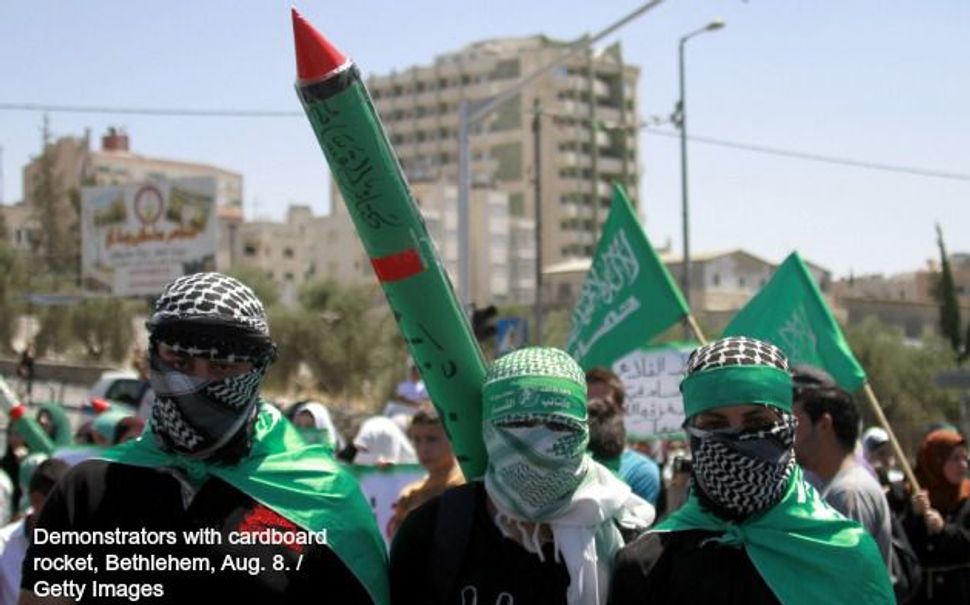 Conflicting reports from the Egyptian-Palestinian negotiations in Cairo: The Israeli news site Mako-News10 reported Saturday evening that the factions comprising the Palestinian cease-fire negotiating team — the Palestinian Authority, Hamas and Islamic Jihad — had made some significant concessions on their demands for renewing the Gaza cease-fire. They agreed to permit Mahmoud Abbas’s Palestinian Authority forces take over the Gaza side of the Rafah crossing from Gaza into Egypt, something Hamas had flatly opposed until now. And they agreed to defer to a later date discussion of the Hamas demand for a seaport in Gaza. The report is based on a “Palestinian source close to the negotiations” who was quoted by Agence France Presse.

On the other hand, the Jerusalem Post reported early Sunday morning local time that the Palestinian negotiators were preparing to leave Cairo and would not negotiate further unless Israel agreed to return to the talks. Israel has insisted it won’t return to the talks unless rocket fire from Gaza is halted.

The Post’s full account doesn’t quite match its headline and lead. The threat to quit Cairo turns out to be Hamas’s chief negotiator, Cairo-based deputy political secretary Moussa Abu Marzouk, saying that the three Palestinian factions would make their decision after consulting with each other on Sunday morning. Several Hamas officials, some in Cairo, some not, are quoted as threatening to leave Cairo and resume full-scale attacks on Israel unless their demands are met. Also quoted is the chairman of the joint Palestinian delegation, Fatah official Azzam al-Ahmed, who said flatly on Friday that the Palestinians would not leave Cairo until an agreement is reached. At the very end the Post story reports the factions’ concessions on Rafah and the seaport.

In Jerusalem, meanwhile, Israeli justice minister Tzipi Livni on Friday gave Prime Minister Netanyahu a draft of a proposal she plans to submit to the security cabinet this coming week to end the conflict in Gaza and resume peace talks with the Palestinian Authority. (Details at News1 in Hebrew and Jerusalem Post in English.)

The plan, first reported by political commentator Sima Kadmon in Friday’s Yediot Ahronot weekend supplement (print only), includes a staged series of confidence-building steps, beginning with humanitarian relief to Gaza residents, followed by reconstruction, establishment of full Palestinian Authority control over Gaza and finally a resumption of diplomatic peace negotiations between Israel and the Palestinian Authority. Kadmon reported that Netanyahu neither accepted nor rejected the plan when Livni first described it to him earlier in the week.

Livni’s plan would likely threaten Netanyahu’s coalition. Right-wing members reject a diplomatic agreement with the Palestinian Authority and are pushing for Israel to topple Hamas and take over Gaza itself.

The multi-stage plan proposed by Livni includes a number of parameters, including a cessation of hostilities along the Gaza frontier; immediate and massive humanitarian assistance for the reconstruction of the Gaza Strip; steps that would seek to address both Israeli security needs as well as Palestinian economic interests in Gaza; recognition of the Palestinian Authority as the sovereign ruler of Gaza while insisting that all Palestinian factions yield to its rule; establishing a PA-run mechanism that would ensure continued international assistance earmarked for civilian needs in Gaza; opening of Gaza crossings with the proper safeguards and inspection apparatus to ensure that no materials that could be used for producing armaments are permitted into the territory; and the resumption of diplomatic negotiations with PA President Mahmoud Abbas.

Israel has refused to return to the negotiations unless rocket fire from Gaza into Israel was halted. The rocket fire ceased when last week’s 72-hour cease-fire commenced Tuesday morning at 8 a.m., but resumed when the cease-fire ran out Friday morning. The Palestinian negotiators had refused to renew the truce for another 72 hours unless their demands were met, including open borders, a seaport, an airport, release of security prisoners and access for Gaza residents to the Al Aqsa mosque in Jerusalem.