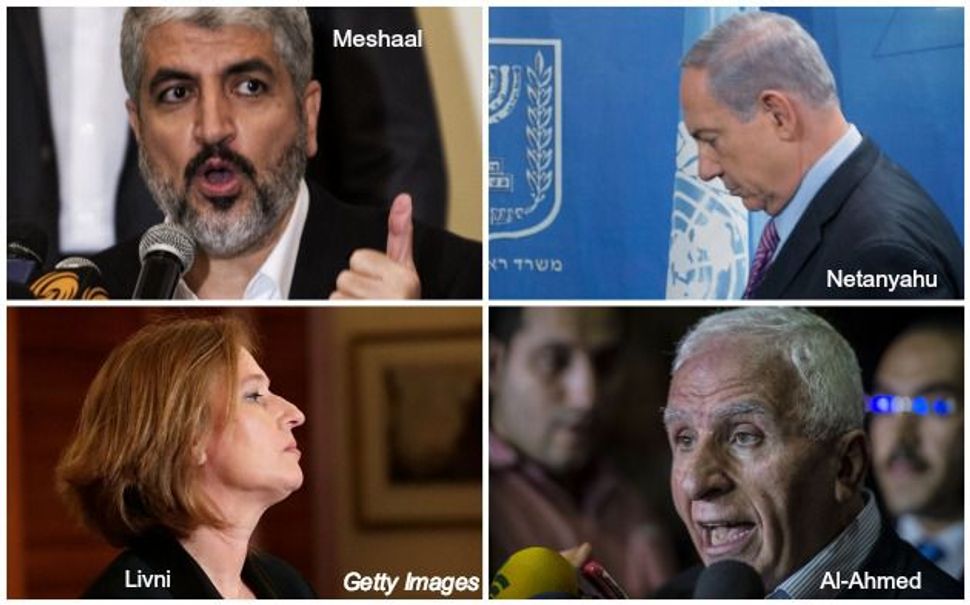 Indications are mounting that the indirect Israeli-Palestinian cease-fire talks in Cairo could be heading for failure, possibly resulting in renewed fighting when the current 5-day truce expires Monday night.

Early reports were that the two sides were close to agreement on an Egyptian compromise proposal for a long-term cease-fire. On Friday and Saturday, however, declarations on both sides indicated that positions were hardening as fierce internal divisions emerged, pulling the leaderships on both sides away from the center. The Palestinian side appears to be stymied by the refusal of the organization’s Qatar-based political secretary, Khaled Meshaal, and the head of its military wing, Mohammed Deif, to go along with the compromise proposals laid out by the Egyptians and mostly accepted by both delegations.

On the Israeli side, meanwhile, chaos appears to be reigning. Prime Minister Netanyahu, who rode a wave of popularity during the military operation, has been facing a tsunami of criticism over the past week from the left, the right, the residents of Gaza-adjacent communities and his top coalition ministers. Two of his senior coalition partners, foreign minister Avigdor Liberman of the Yisrael Beiteinu party and economics minister Naftali Bennett of the Jewish Home party, have repeatedly attacked the prime minister’s management of the Gaza conflict from the right, demanding a continuing assault until Gaza has been taken over and Hamas disarmed or dismantled. Broad circles on the right accuse him of giving away the store (i.e. lifting the blockade) in return for “nothing” (i.e. Hamas-Jihad agreement not to shoot, bombard or tunnel).

The other coalition partners, justice minister Tzipi Livni of Hatnuah and finance minister Yair Lapid of Yesh Atid, have been pressing Netanyahu from the left, demanding that he seek to end the fighting by convening an international Middle East peace conference in cooperation with the Arab League. The goal of the conference would be to negotiate an agreement for an independent Palestinian state in the West Bank and Gaza. Netanyahu hasn’t said no to either minister, by some accounts because he’ll need their votes in the cabinet for the limited cease-fire he’s aiming to obtain in Cairo.

Livni and Bennett have also attacked the Cairo cease-fire negotiations on principle, saying the process amounts to Israel negotiating with Hamas despite its international status as a terrorist organization and effectively gives the Islamist group diplomatic legitimacy. Both also complain that the Egyptian proposal for a long-term cease-fire, by guaranteeing Gaza’s border, would constrain Israel’s ability to reply to terrorist actions from Gaza while failing to prevent Hamas and other terrorist groups from rearming and mounting attacks.

Under the Egyptian proposal, the Palestinian factions in Gaza, principally Hamas and Islamic Jihad, would agree to refrain from all attacks on Israel by land, air and sea, and to refrain from digging tunnels into Israeli territory.

Egypt would agree to open the Rafah crossing between Gaza and Sinai on condition that Hamas accept troops of Mahmoud Abbas’s Palestinian Authority as border guards on the Gaza side. Israel would agree to lift the blockade on Gaza and open its border crossings to people and goods including construction materiel, subject to controls by an unspecified third party to ensure that imported materials wouldn’t be used for military purposes, including tunneling. European Union foreign ministers offered at a meeting on Friday to send troops to police the crossings and to train Palestinian Authority police to supervise construction materiel inside Gaza.

Both sides were to give up key demands: on the Palestinian side, demands for a seaport and airport serving Gaza, as well as release of prisoners arrested in June following the kidnap-murder of three Israel yeshiva students. And on the Israel side, demands for disarming of Hamas and return of the bodies of two soldiers killed in Gaza in July. Negotiations over those demands were reportedly supposed to begin a month after the implementation of the cease-fire.

On Friday, the head of the Palestinian delegation to the Cairo cease-fire talks, Azzam al-Ahmed of Fatah, was quoted by the Palestinian news agency Wafa saying that the two sides had agreed on the main points in the agreement. Later that same day, however, the Lebanon-based Hamas foreign press spokesman Osama Hamdan reportedly told a group of students in Sudan that Israel “must choose” between accepting all the Palestinian demands, including the sea- and airports, or facing a long-term “war of attrition.”

And on Saturday, according to a report on Israel’s News1, the top official of Hamas, political secretary Khaled Meshaal, who has not been participating in the Cairo talks, told Al Jazeera Television that Hamas won’t accept a delay in reaching an agreement to open a sea- and airport.

“We want the passages opened, we want our own port, our own airfield and the central demand — ending the occupation and the settlement project,” Meshaal told Al Jazeera in an interview from his home base in Qatar. “We want to defend our civilians and not use the residents’ blood in order to conduct negotiations. We want our demands accepted, but the Israel is stalling and ignoring them.”

Meshaal’s comments came shortly after he had met with Palestinian Authority diplomat Saeb Erekat, who had flown to Doha at Egyptian urging to try and convince Meshaal to accept the Egyptian proposal.

The senior Hamas member of the Palestinian negotiating team in Cairo, Izzat al-Rasheq, reportedly told the Turkish news agency Anatol on Saturday that the three factions in the Palestinian delegation were meeting Saturday evening to try and work out a common position. Earlier, Rasheq had told the independent Palestinian news agency Ma’an that Hamas leaders were holding rounds of meetings in Qatar and Tunisia during the day on Saturday to try and work out a common position on the talks. There have been reports in recent days of a sharp split between Hamas’s Cairo negotiators, who represent the organization’s political leadership in Gaza and are eager to reach an agreement, and Meshaal and military wing leader Mohammed Deif, who are taking a maximalist, uncompromising position.

Netanyahu himself is widely described as behaving bizarrely under the pressure and crossfire. Members of his inner security cabinet, legally tasked with managing the country’s defenses, say they learned about the current 5-day cease-fire, which began at midnight Wednesday night, from press interviews with Palestinian negotiators in Cairo. According to Yediot Ahronot (print only), Netanyahu and defense minister Moshe Yaalon, his closest ally, were paralyzed when Palestinian radical groups in Gaza opened fire Wednesday night just before the previous cease-fire ran out and the new one went into effect. They had vowed that any new fire would be answered with overwhelming Israeli fire, but they hesitated to return fire Wednesday night for fear of scuttling the upcoming cease-fire and reopening the bombardment of Israel’s south, a political nightmare for the ruling coalition. As a result they waited until nearly an hour after midnight before returning fire with a light round, hoping not to start a new series of exchanges.

Netanyahu then waited until 6:00 Thursday evening before finally convening the security cabinet to discuss the terms of the cease-fire, the new talks and the Egyptian proposal. At 6:30, however, he announced that he was stepping out for a moment and went into another meeting room to meet with heads of Gaza-area regional councils, reportedly hoping that hearing them out would lessen the attacks on him that he expected at a Tel Aviv rally of southern communities’ residents later that evening. The “moment” became an hour and a half, which left the cabinet ministers idle and furious. When Netanyahu returned to the cabinet room at 8:00 he found that Yaalon and Liberman had left and were not returning. At that point Netanyahu adjourned the cabinet until Friday evening, when it reconvened but again took no decisions.

As for Netanyahu himself, he’s been described by those he’s met with in the past week as appearing listless, exhausted and, repeatedly, “battered.” Some speculate that he — along with much of the country — is beginning to absorb the shock of realizing that “defeating terrorism,” the signature watchword on which he’s built his career, doesn’t actually work.