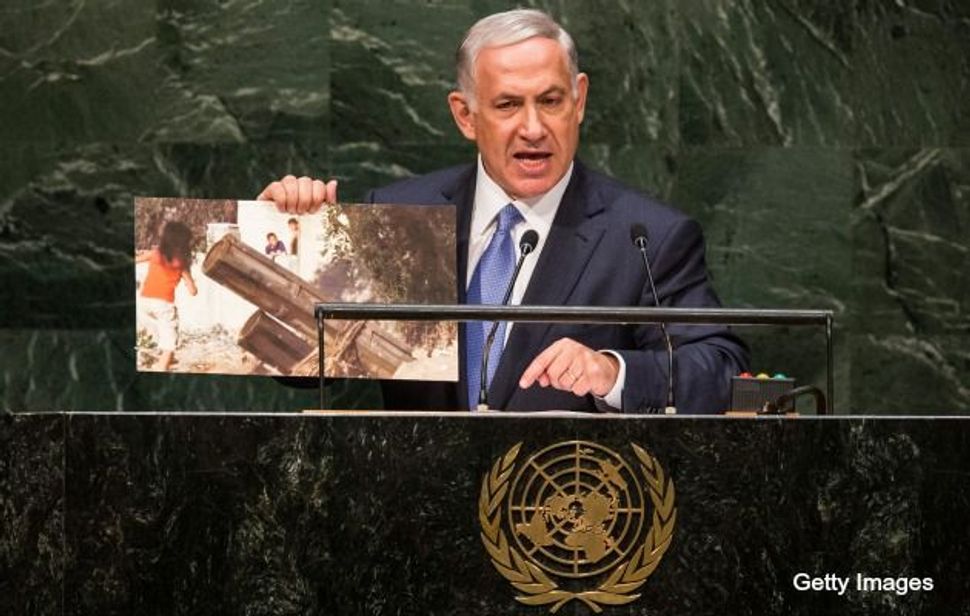 This should have been Bibi Netanyahu’s big year at the United Nations. World revulsion toward ISIS was at a peak, putting Islamist terrorism at center stage. President Obama, long derided by Netanyahu and his allies as a naïve peacenik, had suddenly become a wartime president. The Israeli-Palestinian conflict was, at last, the least of the world’s problems. If Bibi wanted the world to leave Israel and the Palestinians alone to fight things out in their own way, all he had to do was show up and play it cool.

But, of course, you knew he wouldn’t. He had to go and take this opportunity — nay, engraved invitation — to show gracious statesmanship and use it instead to show the petulance and short-sightedness for which he’s famous.

Obama, addressing the assembly September 24, hit all the right notes. In a 39-minute speech that ranged from Ukraine to Ebola, Iran, poverty and climate change, more than one-third was devoted to the fight against radical Islamism, as epitomized by ISIS. He called on “the world to join in this effort” to destroy “this network of death.” He declared, uncharacteristically for him, that there could be “no reasoning, no negotiation with this brand of evil.” He demanded that “the Arab and Muslim world” end funding of extremist ideologies. He called on Muslim youth to choose between pluralism and stagnation. He even pooh-poohed the “illusion” that the Israeli-Palestinian conflict is “the main source of problems in the region.”

The president wasn’t just talking through his hat. Before showing up in New York he’d assembled a global coalition of more than 60 nations to join the fight against ISIS. Some are just providing funds (not a small thing in these tight-budget times; that’s the role our ally Japan played in the 1991 Gulf War). Others, notably the Europeans, are fighting with us in Iraq but haven’t crossed the border into Syria.

On the other hand, five Sunni Arab states have mobilized to join our attack on the Islamist army’s bases on Syrian soil. That’s a historic achievement — getting Arab states to fight openly alongside us Western infidels to extirpate a diseased branch of Islam. You might think back to World War I and T.E. Lawrence leading Arabs against the Ottoman Turks. But that was to dismantle a bloatec empire. This is to defeat concentrated evil that wraps itself in the pages of the Quran.

It’s also worth noting that one of the five Arab states participating in the campaign is Qatar, the chief sponsor of Hamas and the Muslim Brotherhood (and the one Arab state outside Jordan and Egypt that maintains open, ministerial-level ties with Israel). The open participation of Qatar and the tacit, on-again-off-again collaboration with Iran show how broad the world consensus is on ISIS’s threat — and how far the Muslim world has come, implicitly at least, in starting to address its internal contradictions.

For Netanyahu, who’s been trying to drive home all those points for years, this was Christmas, Hanukkah and Purim all rolled into one big gift basket. Or should have been. But the Israeli prime minister couldn’t stand up and say thanks. Not even “I told you so.” He had to go and pick a fight, using his speech to make an unnecessary, implausible and spectacularly ill-timed claim that nobody was going to buy (not even his own intelligence community), namely that “Hamas is ISIS and ISIS is Hamas,” and they’re both the same as Iran because they’re all representatives of “militant Islam.”

we’ve designated both as terrorist organizations. But ISIL poses a different threat to Western interests and to the United States. And that’s just a fact.

It’s easy to forget, in the hash of Netanyahu’s bad diplomacy and blustery rhetoric, that he made some important, even essential points. One was his reframing of the Arab Peace Initiative to become an Arab-states-first, Israeli-Palestinian-next process. It’s a logical extension of the original initiative, which has already undergone several modifications since it was first approved by the Arab League in 2002. (It’s been repeatedly reaffirmed since then, most recently in 2013.)

Given the widespread consensus that the peace process as long understood is near death, a reframing is very much in order. Whether a drastic rewriting of the Arab League plan at this point could get the unanimous approval it won back then is a serious question. It’s not even clear whether the Arab League could be meaningfully reconvened for any serious business right now. And it’s certain that any such proposal will be a non-starter if it doesn’t spell out the end game of an Israeli withdrawal to the pre-1967 lines or something very much like them. It’s not at all clear that’s something Netanyahu could or would do. Still, the idea is a good basis for rethinking the peace process. Bibi deserves props for raising it.

No less important, the prime minister dismantled the nonsensical claim by Palestinian leader Mahmoud Abbas in his September 26 U.N. speech that Israel had carried out a “war of genocide” against the Palestinians. “In what moral universe,” Netanyahu asked the assembly,

does genocide include warning the enemy’s civilian population to get out of harm’s way? Or ensuring that they receive tons, tons of humanitarian aid each day, even as thousands of rockets are being fired at us? Or setting up a field hospital to aid for their wounded?

If anyone was listening to that — and I hope they were — then Netanyahu unfortunately undermined himself by proceeding immediately to a petty quarrel with Abbas over words written decades ago:

Well, I suppose it’s the same moral universe where a man who wrote a dissertation of lies about the Holocaust, and who insists on a Palestine free of Jews, Judenrein, can stand at this podium and shamelessly accuse Israel of genocide and ethnic cleansing.

It’s true that Abbas wrote a doctoral dissertation, published as a book in 1983, that described the Nazi genocide as a “Zionist fantasy.” That was three decades ago. It’s also true that this past April he described the Holocaust as “the most heinous crime to have occurred against humanity in the modern era.” In the 1980s he was part of an organization that sought to uproot the state of Israel. Last Friday he stated — even amidst his torrent of venom — that his goal is a Palestinian state on the “Palestinian territory occupied in the 1967 war.”

Instead of turning the two speeches into another round of mud-slinging in a never-ending conflict that most of the world wishes would just go away, Netanyahu could have seized the high ground. He could have seized on Abbas’s words in order to argue that peace between Israelis and Palestinians is indeed possible, despite Abbas’s crudely offensive language. He could have tied that to his fascinating reframing of the Arab Peace Initiative. That would have thrown the ball back into Abbas’s court — show us good will and we will reciprocate. And it would have made Netanyahu’s arguments about Israel’s security needs and fears part of a larger, more hopeful vision, rather than a warning sign of a dead end ahead.

No less important, it would have reinforced Obama’s point that the Israeli-Palestinian conflict isn’t “the main source of problems in the region.” It would have demonstrated that, unlike the region’s truly terrible crises, this one can have a happy ending.

Instead he made Israel’s war with Hamas part of the larger challenge posed by ISIS and its ilk. In the process, he reinforced the belief that Israel and its troubles are part of the problem, not the solution.