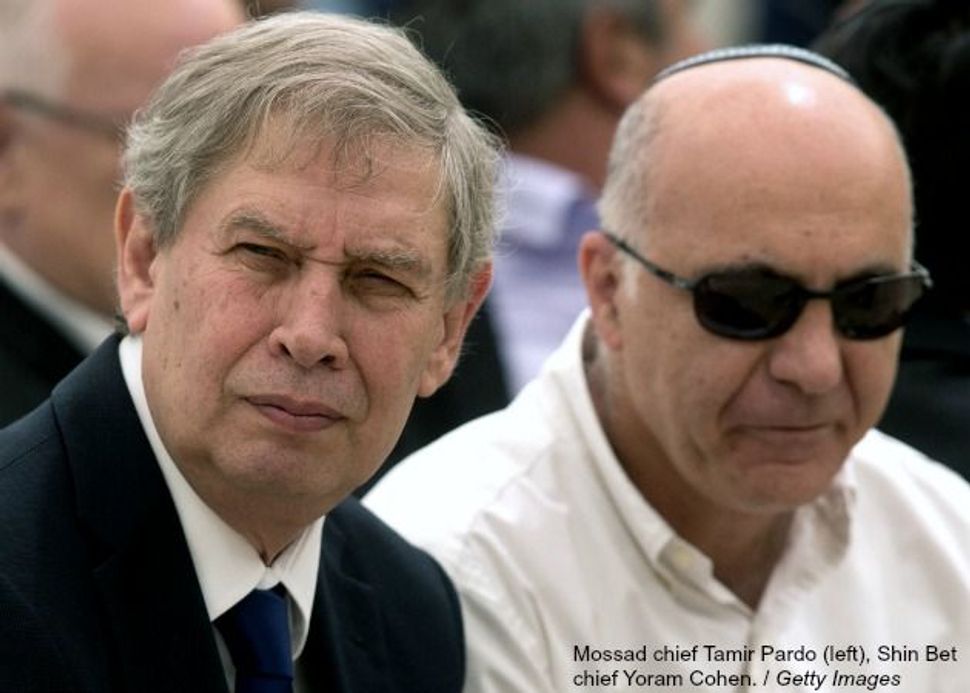 Tensions continue to mount between Israel’s Shin Bet domestic security agency and the country’s other two intelligence services, the Mossad foreign intelligence agency and the military intelligence directorate of the Israel Defense Forces. So reports military correspondent Amir Rapoport in the Friday edition of the center-right daily Maariv.

It’s a messy tangle, even by the byzantine standards of Israeli security politics. In part it reflects Israel’s uncertain status in Gaza, having withdrawn its troops from the territory without ever handing over the keys to any other recognized sovereign. Partly, too, it’s the latest battleground in the Likud’s continuing effort to move Israel’s intelligence agencies to the right.

The details: The Shin Bet and military intelligence have been sharply at odds since last summer over the still-unresolved question of whether the Hamas leadership in Gaza intended to instigate the summer war with Israel, as the Shin Bet claims, or the two sides stumbled into an unintended war through a series of misunderstandings, as military intelligence maintains (and as I wrote in July). The disagreement reportedly erupted into a shouting match at a Cabinet meeting shortly after the August cease-fire and has yet to be resolved.

Gaza is a gray area. Israel withdrew its troops and civilian settlements from the territory in 2005 but didn’t hand it over to a foreign sovereignty. Israel maintains in public statements that it’s no longer responsible for Gaza, but most of the international community doesn’t recognize the abdication, nor is any such decision known to have been taken formally by any Israel legal body.

It’s against that legal background that the Mossad-Shin Bet dispute arises. The Shin Bet has continued operating in Gaza uninterrupted. According to Rapoport, it was decided (he doesn’t say by whom) after the withdrawal to leave the territory under the aegis of the Shin Bet “in light of the close connection between what happens in the Gaza Strip and the territories of Judea and Samaria, which are under Israeli control and within the operational responsibility of the Shin Bet.”

The Shin Bet-Mossad conflict grows out of the Mossad’s operations to interdict weapons smuggling from Iran into Gaza, via Dubai and Sudan into Sinai and then through tunnels into Gaza. According to Rapoport, the Mossad’s authority was recently extended to dealing with the receiving end of the shipments inside Gaza, which is nominally the Shin Bet’s turf. “The transfer of authority was not smooth and was accompanied by disputes,” Rapoport wrote. The disagreements have since been resolved, but tensions remain.

Since then both agencies, but principally the Shin Bet, have been heavily criticized for failing to foresee the 2007 Hamas takeover of Gaza and failing to address the growing problem of Hamas’s cross-border attack tunnels.

The tensions among the agencies are exacerbated, Rapoport writes, by personal strains among the agency heads — or, more precisely, between Shin Bet director Yoram Cohen on one hand and the heads of the Mossad and IDF, Tamir Pardo and Benny Gantz, on the other.

Previous Mossad director Meir Dagan and previous Shin Bet director Yuval Diskin were friends in heart and spirit and held similar professional opinions (including their shared opposition to an attack on Iran in 2010-2011, together with then-IDF chief of staff Gabi Ashkenazi). The fact that current Shin Bet director Yoram Cohen isn’t on the same wavelength as the leadership of military intelligence and the IDF is well known, especially after their public feud and the letter that chief of staff Gantz sent to the prime minister, attacking the Shin Bet. Moreover, the relationship between Cohen and current Mossad director Tamir Pardo isn’t good, according to sources close to the two of them.

One of the key points in all this, as Rapoport notes, is that Shin Bet director Cohen comes with a certain ideological baggage — “he comes from a religious family in Jerusalem that’s identified with the Likud.” Such family connections carry a lot of weight in Israeli politics, as reflected in the nonstop comment about Irgun-diaper baby Tzipi Livni’s “odd pairing” with Mapai heir Yitzhak Herzog.

Netanyahu’s favored candidate to succeed Pardo at the Mossad, national security council director Yossi Cohen, has the same religious-Jerusalem-Likud family background as Yoram Cohen of the Shin Bet, Rapoport notes. Yossi Cohen is a former deputy director of the Mossad and is considered well qualified for the top job there. Sources who know him well tell me that his personal views are far less ideological and far closer to the mainstream security establishment than Yoram Cohen’s.

In any case, his chances of running the Mossad are dimming, Rapoport writes, as his relationship with Netanyahu has deteriorated during his time as national security adviser, “like many of the [national security] staff directors before him.”