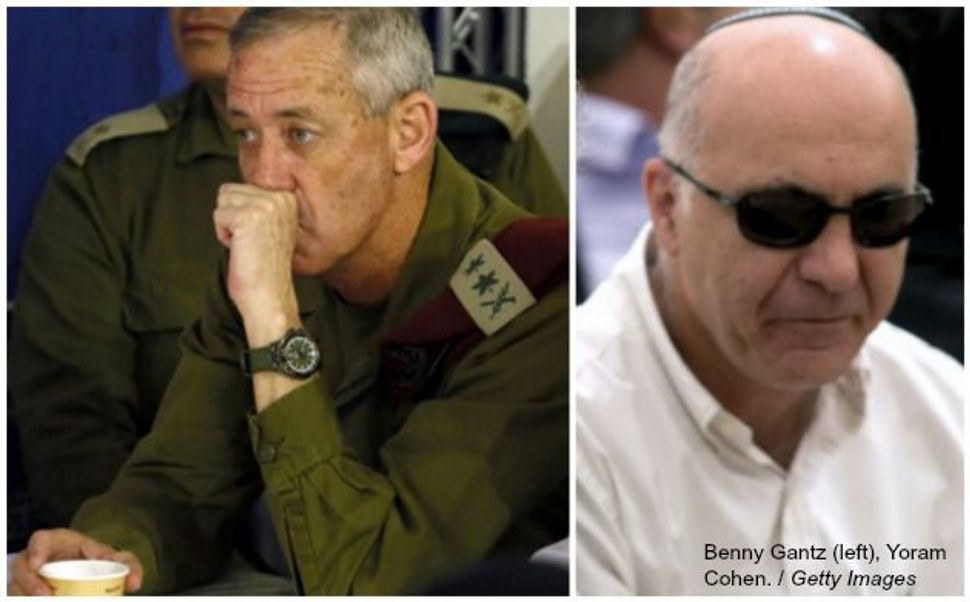 Israelis last week watched their defense establishment undergo its nastiest and arguably most dangerous meltdown in decades as the heads of two main branches, Benny Gantz of the Israel Defense Forces and Yoram Cohen of the Shin Bet security service, publicly traded insults and questioned each other’s integrity and professional competence.

The public dispute erupted last Tuesday, November 11. That evening the popular television newsmagazine Uvdah (“Fact”) aired a report in which senior Shin Bet officials, their faces and identities obscured, claimed the military had mishandled critical intelligence before last summer’s Gaza war. The officials said the Shin Bet had warned the army last January that Hamas was planning a July war, but the army failed to act. A military officer appeared on camera to deny that any such warning had been received.

The broadcast sparked a furious war of words between IDF chief of staff Gantz and Shin Bet director Cohen. On Wednesday morning Gantz wrote a letter to Prime Minister Benjamin Netanyahu (Hebrew text here) charging that officials of the secretive security service had “crossed all moral and ethical lines” by appearing in public and portraying the IDF as incompetent. He categorically denied that the military had received any warning of a planned war, whether in January or later. He also charged that the Shin Bet, “as an intelligence agency,” had set a “dangerous precedent” in permitting its personnel to appear and expose classified information and methods of operation.

After a three-way make-up meeting late Wednesday between Netanyahu, Gantz and Cohen, the Shin Bet Thursday morning issued a public “clarification,” itself a rare act, saying its agents had not really claimed to have warned of a July war (despite the fact that they’d been shown on camera saying just that). Later that day, however, Cohen backtracked and counterattacked (Isn’t that an Elton John song?). In an open letter to Shin Bet retirees (here) he said he stood by everything the agents had said on television and blamed the feud on Gantz. He claimed he’d “decided to cooperate” with the newsmagazine to “show the Shin Bet as a professional, relevant organization that made important contributions to the success of Operation Protective Edge.”

Superficially, the dispute centers on the mutual accusations themselves: On one hand, the Shin Bet’s claim that it warned the IDF of Hamas’ July war plan, but that the IDF mishandled or ignored it. On the other hand, IDF’s counter-claim that there was no such warning.

On a deeper level, the incident represents an escalation of a serious debate that’s been going on since August, over whether or not Hamas actually intended to launch a war. The IDF and its intelligence directorate continue to maintain, as they have since the war began (and as I reported in mid-July), that Hamas didn’t plan the war but stumbled into it through a jumble of miscalculations and miscommunication.

The question — did Hamas plan a war or stumble into it? — has become a major point of contention between the IDF and the Shin Bet, with repercussions in the broader political system. Rightists, who accused the IDF General Staff during the war of cowardice for opposing a full-scale reconquest of Gaza, now accuse the military of soft-pedaling the Hamas threat by downplaying its warlike intentions. The issue was handed to a state investigative commission in late August following a cabinet meeting, just after the August 26 cease-fire, that erupted into a shouting match between Cohen and the IDF’s intelligence chief (outgoing, of course) Aviv Kochavi.

Lurking still further in the background are troubling questions about the relationship between intelligence and ideology, and which should govern which. Closely related are questions regarding Netanyahu’s stewardship of Israel’s national defense.

This dispute is the second feud in the senior ranks to erupt into the headlines since Netanyahu took office in 2009. The last one, the so-called Harpaz Affair (read about it here) in late 2010, was not a substantive dispute between agency heads but a personal feud within one branch, the military. The IDF’s then-chief of staff, Gabi Ashkenazi, and his direct boss, defense minister Ehud Barak, hadn’t been on speaking terms for months, creating a dangerous rupture in the chain of command. The feuding led to interoffice intrigue, eventually resulting in multiple criminal indictments and still-unresolved investigations. Through it all, insiders say, the prime minister looked on passively, unable to fulfill his first duty of keeping the country’s defense operating smoothly.

This week, again, Netanyahu seemed helpless, despite his brief Wednesday attempt at peacemaking. Yediot Ahronot’s lead political commentator Nahum Barnea wrote on Friday that Ariel Sharon would have addressed the issue by ordering the Shin Bet director to reassign his camera-happy top aide at once as station chief in Katmandu. Netanyahu has responded by asking the dueling commanders to make up and play nice.

Probing still deeper, the dispute looks at least partly like a product of Netanyahu’s efforts since 2010 to reshape Israel’s intelligence agencies to reflect his own more pessimistic views of Israel’s enemies (I wrote about it here). The effort dates to the spring of 2010, when Netanyahu asked the security cabinet to authorize a military attack on Iran. The heads of the main security branches, the IDF, Shin Bet and Mossad, were unanimously opposed and swayed the cabinet to deny Netanyahu’s request. (Then-Shin Bet chief Yuval Diskin told Yediot Ahronot in 2013 that Netanyahu had asked the trio to put forces on alert, and they refused, claiming it was tantamount to declaring war on Iran and therefore illegal.) By July 2011 all three had been replaced by new commanders who were expected to be, if not more hawkish, at least more compliant. As it turned out, the new IDF and Mossad chiefs, Benny Gantz and Tamir Pardo, were even more outspokenly dovish on Iran than their predecessors. Bibi’s one success in that round of appointments was his choice for Shin Bet chief of Yoram Cohen, a favorite of the religious-nationalist settler community and the first Orthodox Jew to head a major Israeli security branch.

And what of the reported Hamas plans for a July war? The first thing to understand is that the alerts didn’t involve a kidnapping on the West Bank, but rather a possible ground attack via a tunnel from Gaza. The Shin Bet claimed in its Thursday morning statement — the one that said it hadn’t predicted a war, before Cohen doubled down and said it had — that it actually issued a warning in late April of a possible major attack. It was expected to come through a tunnel at the southern end of the Gaza Strip, heading toward Kibbutz Kerem Shalom. The statement said the agency and the IDF immediately took action to preempt it.

According to Ynet military correspondent Yoav Zeitun, who has assembled a detailed rundown of who issued what warnings and when, IDF units in the field became aware in February that Hamas had suddenly increased its pace of tunnel-digging, from 50 meters a month to 200 meters. Combat units began training at that point for a possible military confrontation. Chatter intercepted among Hamas personnel referred to a “July war,” but the sense on the Israeli side was that it meant little more than a heavy attack through the Kerem Shalom-area tunnel.

It was also unclear whether a tunnel attack would be aimed at penetrating a civilian village to cause havoc, or at attacking a military base to kidnap a soldier. Shin Bet statements have spoken of tunnels “into” and “under” civilian villages, but no tunnel came within a half-kilometer of a village, and the few Hamas crews that did emerge from tunnels during the war were all met immediately by military units, leaving the question of Hamas’ strategic intent unanswered.

Importantly, too, neither the IDF nor the Shin Bet’s midlevel personnel believed that Hamas intended a tunnel attack to escalate into a war. They believe the terrorists expected to be able to snatch a soldier, retreat back to Gaza and carry on as usual, with perhaps some minor skirmishing before things settled down.

Ynet’s Zeitun quotes defense minister Moshe Yaalon as saying in an October interview that neither he nor the prime minister “heard any warnings of a summer war, but we need to be prepared and we were prepared. We related to the [Gaza] Strip as an unstable entity and we thought that if the worst developed, it would develop from the south [i.e. near Kerem Shalom]. Hamas was not thinking from the outset of going to war. It happened through an unraveling of events, including the failure of the kidnapping of the boys at Gush Etzion.”

In the end, what caused the war was not Hamas’s tunneling at the south end of the Gaza Strip but something that none of the agencies involved — not the IDF, not the Shin Bet, not even the Hamas command in Gaza — saw coming, namely the June 12 kidnapping of the boys. (It’s been reported that the kidnappers, the Qawasmeh clan of Hebron, had gotten funding from a brother living in Gaza who worked at a Hamas charity, and that a Hamas official in Turkey had a sense of what was coming, but the trail so far ends there; there’s still no indication that the Hamas military command in Gaza was in the picture at any point.) The kidnapping prompted Israel’s roundup of Hamas leaders in the West Bank, which sent Hamas Gaza leaders scrambling into their tunnels, fearing wrongly that they would be next. And Hamas’ going to ground in June led to a sudden increase in rocket fire by radical jihadi groups that Hamas had previously been restraining under the terms of the November 2012 Israeli-Hamas cease-fire. The increased rocket fire and Israeli retaliatory fire fueled a spiraling escalation that became Operation Protective Edge. Nobody planned it and nobody wanted it, and once it started, nobody knew how to end it.

The next chapter in this tragedy of errors was the decision by Shin Bet director Yoram Cohen to use the events in order to paint a picture of Hamas as incapable of maintaining its agreements, which dovetails well with Netanyahu’s outlook but contradicts the information amassed over years of study by IDF Military Intelligence (and, by the way, by the Shin Bet under previous directors).

Now the tragedy of errors has been followed by a comedy of blunders, namely Cohen’s blundering attempt to get his message out, which led to such a clumsy hash last week that it blew up in his face and prompted even the slavishly pro-Netanyahu daily Israel Hayom, owned by Sheldon Adelson and so blatantly partisan that wags call it the “Bibiton” (iton means newspaper), to demand that Netanyahu reprimand him. So far, though, no go: Bibi is standing by his man.