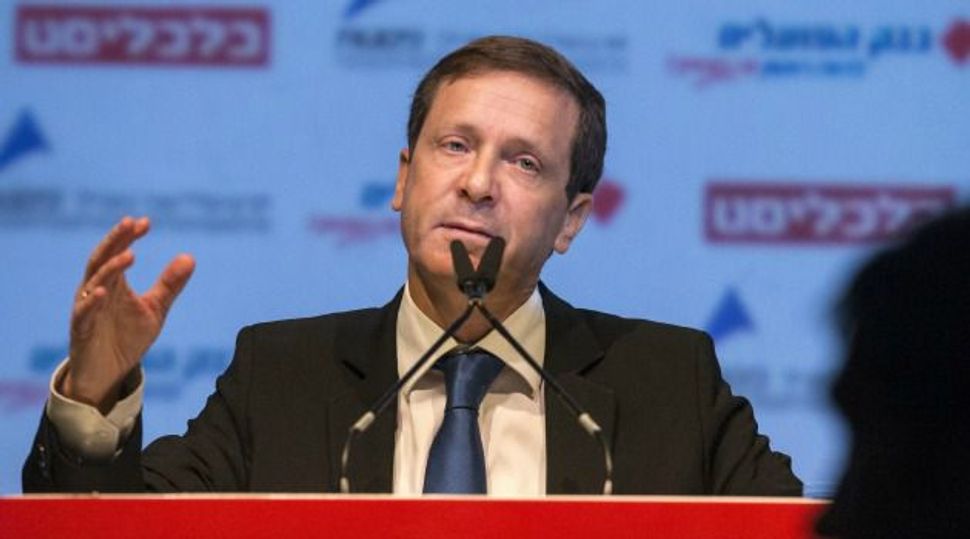 All bets are off regarding the outcome of Israel’s March elections, thanks to a massive corruption investigation involving senior figures in Avigdor Lieberman’s Yisrael Beiteinu party. See the details here.

Early signs suggest it could cripple his political career, even though he hasn’t been implicated. And it might badly hurt the chances of the Labor-Livni alliance to lead the next government.

More than two dozen people were arrested on Wednesday on suspicion of involvement in a huge bribery and kickback scheme. They include a deputy cabinet minister, a former cabinet minister, top party officials and numerous current and former local government heads and non-profit managers. Allegations include demanding and paying kickbacks in return for government budgets and contracts as well as hiring relatives of government and party officials.

The top suspect, Knesset member Faina Kirschenbaum, is deputy interior minister, secretary-general of the party organization and one of Lieberman’s closest confidantes. One of the allegations is that the Beef Cattle Growers’ Association gave her daughter Ranit a job in return for certain considerations.

There haven’t been any reports implicating Lieberman, the party’s founder and currently Israel’s foreign minister. Globes political analyst Lilach Weissman predicts that he’ll wiggle out of it, just as he’s wiggled out of past corruption investigations, by dumping a few loyal associates and presenting what looks like a clean house. Maybe.

But early signs are that the scandal will indeed hurt him. A Jerusalem Post-Maariv poll released late Thursday night, after news of the scandal broke, showed his party winning just 5 seats, barely above the 4-seat cutoff for entry into the Knesset. He holds 13 seats in the outgoing Knesset. Polls as recent as a day earlier showed him fluctuating between 7 and 11 seats in the upcoming vote.

Walla News reports that the scandal is causing deep alarm in Israel’s Labor Party, which is counting on Lieberman taking votes away from Benjamin Netanyahu’s Likud. But that’s not the only problem Lieberman’s troubles pose to Labor. Consider:

Labor and Likud have been polling between 21 and 24 seats each in recent weeks, though most polls show Labor leading by one or two seats. Whichever party comes in first on March 17 will need to find smaller parties as coalition partners to put together a 61-seat Knesset majority and take over.

Likud has a natural ally just to its right in the settler-backed Jewish Home party, which takes 17 seats in most polls. That means Netanyahu starts with perhaps 40 seats out of the gate.

Labor has a natural ally just to its left in the left-wing Meretz, which polls at 6 or 7 seats. That means it starts with 30 to 32 seats.

The action therefore takes place in the middle of the map, where three secular centrist parties and two ultra-Orthodox parties are presumed to hold the balance of power. All of them are believed willing to join a government under either of the larger parties, though there are any number of grudges that divide them from each other and, in several cases, from Netanyahu.

The secular parties include Yair Lapid’s Yesh Atid, Likud defector Moshe Kahlon’s newly formed Kulanu and Lieberman’s Yisrael Beiteinu. Lieberman has long been considered far-right, mainly because of his hawkish views on civil liberties and minority rights, but he doesn’t oppose territorial compromise or Palestinian statehood, the main issues dividing left and right. Moreover, he has moved his tone sharply toward the center in the past few months and stated repeatedly that he is open to joining with either Likud or Labor.

The ultra-Orthodox or Haredi bloc is in turmoil in recent weeks. One half consists of the Ashkenazic Haredi party United Torah Judaism, which polls consistently at 7 seats, and the Sephardic Haredi party Shas, which has 11 seats in the outgoing Knesset but was polling until recently at 8 seats in the next. Both Haredi parties essentially are open to joining with whichever party offers better terms for their sectoral interests.

Several weeks ago, however, Shas split when its No. 2, former chairman Eli Yishai, defected and announced the formation of his own party, Ha’am Itanu (“The people are with us”). His fight with party chairman Arye Deri is a mixture of personal bad blood and political differences between Deri’s moderately dovish views and Yishai’s hardline hawkish stance.

Since the split, most polls show them running evenly at 4 seats each, putting both of them perilously closely to the entry cutoff (4 seats, or 3.25% of the popular vote). If those numbers hold up, Deri’s Shas would have just 4 seats to offer as part of a centrist swing bloc, while Yishai’s new slate would add its 4 to Netanyahu’s guaranteed base.

Efforts are now underway by Sephardic rabbinic leaders to negotiate a reconciliation and bring Yishai back into Shas, presumably driven by the possibility that continuing the split could destroy both of them. Both leaders say they’re open to reuniting. No telling where it will end up.

Now, before we look at the coalition combinations theoretically available to either of the two main contenders, it must be noted that the swing parties come with their own baggage. The biggest problems are that even though the Haredi bloc and Lapid’s Yesh Atid are both swing parties that would be willing to sit with either Netanyahu or Herzog, it’s not clear that they could be coaxed into sitting with each other. Lapid has made a central theme in his political career out of breaking down the Haredi community’s self-imposed barriers and integrating them into mainstream Israel. That means primarily making them serve in the military and pressing them into the work force. Haredi resentment toward Lapid is enormous, and it’s likely that they’d demand a rollback of the legislation he won in the last two years as a condition to sitting with him in a coalition. It’s hard to imagine him agreeing to roll back his signal successes on such central platform issues.

Secondly, despite Lieberman’s softening of his tone in recent months there’s a huge amount of ill will between him and Meretz over his stands on civil liberties and minority rights. That’s not a problem for Netanyahu, but it would be a big problem for Herzog.

The bottom line: Based on today’s numbers, with three months to go (and, of course, anything can happen in three months), Netanyahu could theoretically build a coalition based on the following: Likud 23, Jewish Home 17, Yishai 4, Deri 4, United Torah Judaism 7, Kahlon 7, Lieberman 5, Lapid 11. Total: 78.

Even if he leaves out Lapid in order to appease the Haredim, he’s still got 67 seats.

As for Herzog, his optimal theoretical combination looks like this: Labor-Livni 24, Meretz 7, Lapid 11, Kahlon 7, Lieberman 5, United Torah Judaism 7, Shas 4. Total: 66. That’s assuming he could somehow find a magic formula that allows the Haredim and Lapid to sit together.

The one joker is the possibility that Herzog could convince the various centrist players that continued Netanyahu rule is so undesirable that they should agree to form a government with the support, tacit or open, of the Arab-backed parties. Recent polls have consistently shown the Islamist-leaning United Arab List getting 6 seats, the Communist-led Hadash party with 5 and the Palestinian nationalist Balad failing to cross the threshold.

It’s worth pointing out that negotiations to form a single Arab list have been limping along for months. The driver is the new 3.25% threshold. The stumbling blocks are partly issues of personality — particularly who would lead the new list — and partly reluctance on the part of Hadash to define itself as an Arab party.

Hadash is an anomaly. Most of vote comes from Arab Israeli citizens, but its leadership and activist base are mixed Arab and Jewish. One of its Knesset members is the popular and respected Jewish leftist politician Dov Khenin, the Knesset’s leading environmentalist. Based partly on his personal appeal among green and anti-occupation youth, the party has been getting a small but growing share of the Jewish vote in recent years.

It’s almost unimaginable that Herzog could convince Hadash, Shas and Yisrael Beiteinu to sit together in a single coalition. But inimaginable seems to be the rule of thumb these days. Did I mention that Netanyahu was disqualified by the Likud party comptroller this week from running in the party’s upcoming leadership primary because of alleged campaign violations? He’s said to have used party facilities, which are legally required to be neutral in the primary campaign, for an event that turned out to be part of his primary campaign against his arch-rival, ultra-rightist former deputy defense minister Danny Danon.

Netanyahu says the comptroller doesn’t have the authority to exclude him. He’s lodged an appeal with the party’s internal tribunal and vowed to take it next to the civil courts. It’s hard to imagine him being forced out. But, as I said, anything is possible this year.