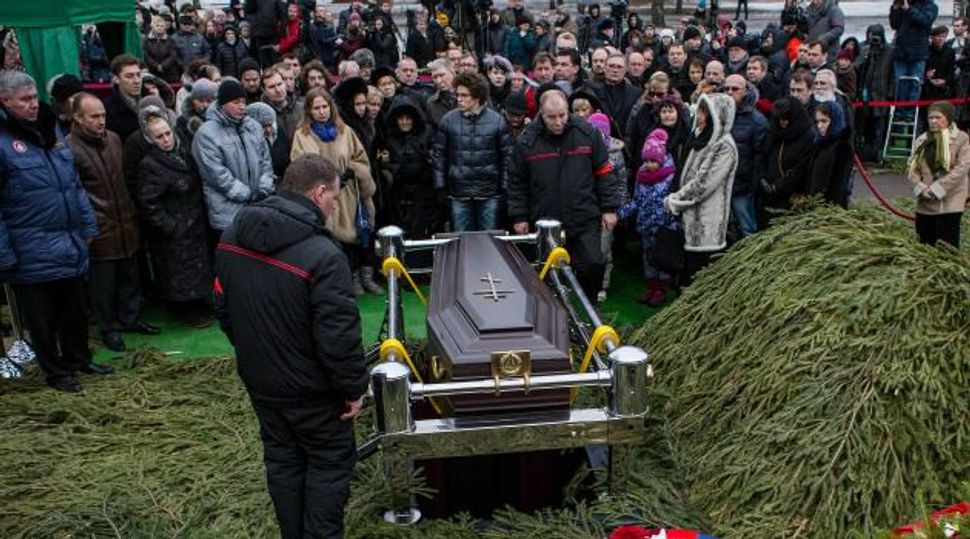 Mourning a Movement: People gather around the coffin of opposition leader Boris Nemtsov at a Moscow cemetery. Image by getty images

The murder of Boris Nemtsov, the popular Russian liberal opposition leader, is the latest in a long history of politically motivated assassinations of those who threatened the Kremlin. Yet, never before has Russia galvanized around the symbol of one of the murdered to the extent that it has in the days following Nemtsov’s shooting just near Red Square on February 26.

Most infamously, Stalin was responsible for the most prominent of these assassinations, including that of Leon Trotsky, Moscow State Jewish Theater actor and director Solomon Mikhoels and ambassador Maxim Litvinov. Like them, Nemtsov was born a Jew (though he had converted to Russian Orthodoxy), and in recent months had been described on Russian state television as an “enemy of the people” — in his case, for his opposition to Russia’s role in the war in Ukraine.

Although assassinations of politicians have been rather rare since the end of the Soviet Union, and while Putin’s regime blames everybody but themselves for the murder of Nemtsov, it is not surprising that all political assassinations in Russia in the past 20 years have targeted liberal politicians. In addition, the victim almost always seems to be on the verge of releasing some bit of information dangerous to Putin’s regime or to the FSB, the Russian security services once headed by Putin. Nemtsov’s murder came just days before he was to appear as the leader of the “Spring” march, a large protest rally he had organized to take place March 1. He also planned to release incriminating evidence showing that the Russian army was fighting a secret war in Ukraine.

Before he was shot, Nemtsov gave an interview to Ekho Moskvy, Russia’s premier, uncensored, radio station, in which he accused Putin of denying that a war was being fought while “we see the graves of these soldiers.” He also spoke about some of the goals of his “Spring” rally, which the authorities only reluctantly approved to take place in the outer reaches of Moscow. Namely, ne wanted an investigation of Putin’s inner circle, which he saw as guilty of various forms of corruption: “All these known cases should be investigated, and the corrupt officials should appear before the court.”

The four most prominent members of the Russian opposition in recent years have been Alexei Navalny (now under house arrest), Garry Kasparov (exiled), Mikhail Khodorkovsky (imprisoned and now exiled) and Nemtsov. The regime has found a way to muzzle them all and to remove them from any sources of influence on the Russian public. But Nemtsov — already barred from appearing on Russian state television for the past decade — was the only one assassinated.

Why would the government resort to something like this now? For the first time since the “Ruble crisis” in 1998, ordinary Russians are experiencing another economic collapse, which comes as a result of cheap oil prices. They are also experiencing economic sanctions against Russia as a result of the annexation of Crimea and the war in Ukraine. Russians find themselves again in a state where they can’t afford certain items, where foreign cars have doubled in prices and where, just like in Soviet times, they can no longer go abroad on European vacations — this time not because they are not allowed out of the country, but because they can no longer afford to exchange their semi-worthless Russian currency for the strong euro or dollar.

Before he died, Nemtsov stated that he believed a protest rally with more than 100,000 attendants had the power to change the direction of the government. Tragically, Nemtsov’s “Spring” rally turned into a wake, one filled with desperation expressed by the tens of thousands who crowded the streets of Moscow and St. Petersburg. “Now that he is in the grave, the last hope for Russia is in the grave,” said Vladimir N. Voynovich, a famous Russian novelist speaking at the gathering. “He was one of the last optimists in this country.”

Either Nemtsov’s murder will galvanize the population around it and take down the Leviathan, or prove once again the utter political apathy of the Russian people in response to even the most brazen political assassinations.