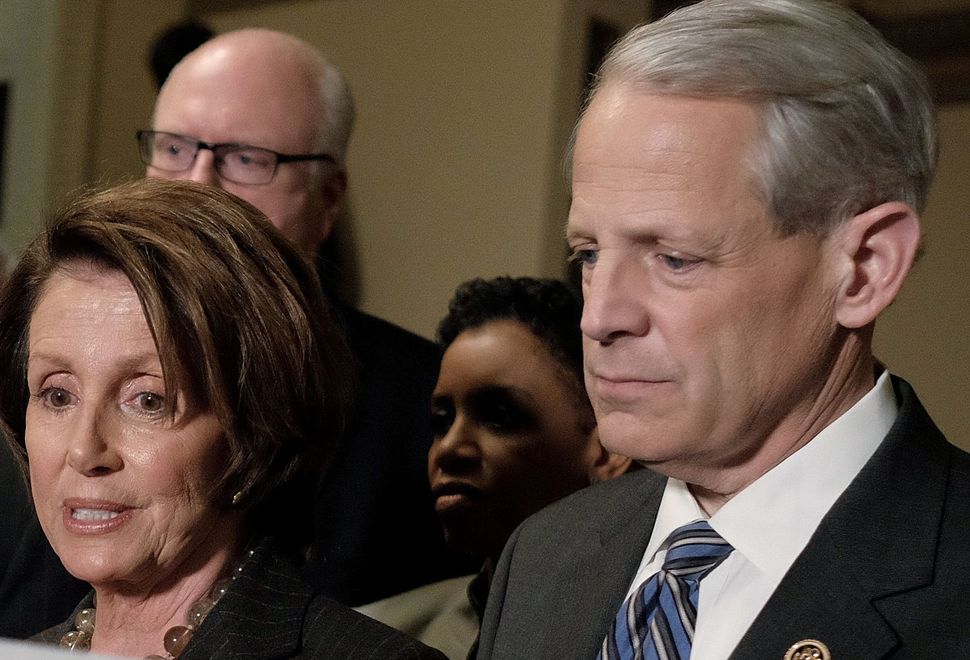 Two magazine length articles on ISIS are circulating on the Web these days that, taken together, are must-reads if you want to get a handle on what this thing is, what makes it tick and what the odds are of beating its threat.

I’ll describe them below and explain how they complement each other and tell different sides of the story. But first, some notes on the Jewish community’s role in the current American debate over Syrian refugee admission.

When the House of Representatives passed its new Syrian refugee-screening bill, the America SAFE Act (full text here), on Thursday, 47 Democrats — exactly one-fourth of the 188-member Democratic caucus — joined the Republicans to make up the 289-vote supermajority approving the measure. Among them were two of the House’s 18 Jewish Democrats (one-ninth), Steve Israel of New York and Jared Polis of Colorado.

Here is the overall roll call on the vote. Here are the Jewish members.

Two Republicans joined the Democrats to vote against the measure: Steve King of Iowa and Walter Jones of North Carolina. Both issued statements (King’s, Jones’s) saying they voted No because the bill didn’t go far enough in restricting President Obama’s authority to admit Syrian refugees. The bill was far milder than Republicans had originally sought, even though the administration still says it will effectively stop new refugee admissions. It’s the first test of new House Speaker Paul Ryan’s pledge to try and soften the Republican Congress’s extremist tone and start working with the other side.

One of the 47 Democrats who voted “yea,” Gerry Connolly of Virginia, appeared on MSNBC that evening to explain why he’d done it. His argument was that he didn’t believe it would raise impossible barriers to refugee admission, since all it does is add a new layer of bureaucracy to the application process — and his constituents were demanding that he do something to respond to the Paris terror.

Rep. Steve Israel’s defection brought a rather over-the-top response from David Harris Gershon, a self-described Zionist BDS advocate. In a Tikkun Daily blog post that was reposted on the popular left-wing Daily Kos website, he wrote that of all 289 backers of the refugee bill, Rep. Israel’s “yea” was “the most shameful vote of all” because the congressman is “somewhat of an expert on the Holocaust.” Indeed, “as Director of the Touro Law Center in the late 80s, he created the Institute for Holocaust Law and International Human Rights.”

“Israel understands,” Gershon wrote, “that to ‘Never Forget’ means to fight indifference in the face of such human tragedies. To never again allow the world to look away when a people are being chased and rounded up by machine-like killers.

“And yet Israel looked away. Which begs the question: would he have done so to Jewish refugees ― my relatives as well as his own ― who were fleeing Hitler in 1939?

“I believe we all know the answer.”

Does that sound harsh? Here’s another what-if question: What if Rep. Israel had voted for easing the refugees’ path and someone on the right had accused him of ignoring the lessons of the Holocaust by welcoming thousands of newcomers to America from a region where anti-Semitic views run upwards of 74%? Would liberals respond with outrage over cheap and inappropriate use of Holocaust imagery? Is abuse of the Holocaust only taboo when you’re on the wrong side of a given argument?

It’s at moments like these that one wishes the good congressman would find a way to change his name to something more innocuous, like Schwartz or Leibowitz. For one thing, his moniker makes him too easy a target. Jared Polis, the other Jewish Democratic “yea” vote, would have made at least as easy a target if you’re looking for supposed inconsistency in a Jewish lawmaker’s human rights positions. But first you’d have to know Polis is Jewish. He’s not as obvious a target as Rep. Israel for the casual, um, critic.

Elsewhere in the fight, there were 11 national Jewish organizations among the 81 major religious, human rights, labor and immigrant-rights organizations that jointly wrote to members of Congress last Tuesday, November 17, urging them not to close the doors to Syrian refugees. (Here’s the letter’s text along with the full list of signers.) The letter was initiated by the American Civil Liberties Union and signers included, among many others, the U.S. Conference of Catholic Bishops, the Presbyterian, Episcopalian, Unitarian and Evangelical Lutheran churches as well as the United Farmworkers, CARE USA, the International Rescue Committee, Save the Children and a host of Asian-American and Muslim rights organizations.

The 11th is a surprising one: a Zionist youth group that’s becoming more and more visible lately as a voice in peace and social justice causes: Habonim Dror North America, the labor Zionist youth movement. Give me a moment to kvell.

Now, as I promised, about those two magazine articles you need to read:

One, which appeared in The Atlantic last March but is now getting the attention it deserves, is “What ISIS Really Wants” by the magazine’s contributing editor Graeme Wood. It details, in surprisingly readable and engaging fashion, the theological and ideological roots of the organization. It’s essential for clearing away the thicket of blather surrounding the Islamic State. It also does a pretty good job of debunking the apologists who claim that ISIS has nothing to do with Islam or religion. It’s rooted very deeply in the most traditional reading of Islam.

The other, “Paris: The War ISIS Wants,” appeared the other day on the New York Review of Books website. It’s by the Paris- and New York-based anthropologist Scott Atran and London doctoral student Nafees Hamid. They went and interviewed young people who’ve been drawn into the organization to learn what attracts them. They make the point that, whatever the details and complexities of the organization’s theological roots and precepts, most of its young devotees know nothing and care less. Mostly, they found, ISIS appeals to young Muslims’ quest for identity and certainty, plus the romance and adventure of joining a movement that’s changing the world. Chilling but essential, and an important companion piece to Graeme Wood’s Atlantic article.