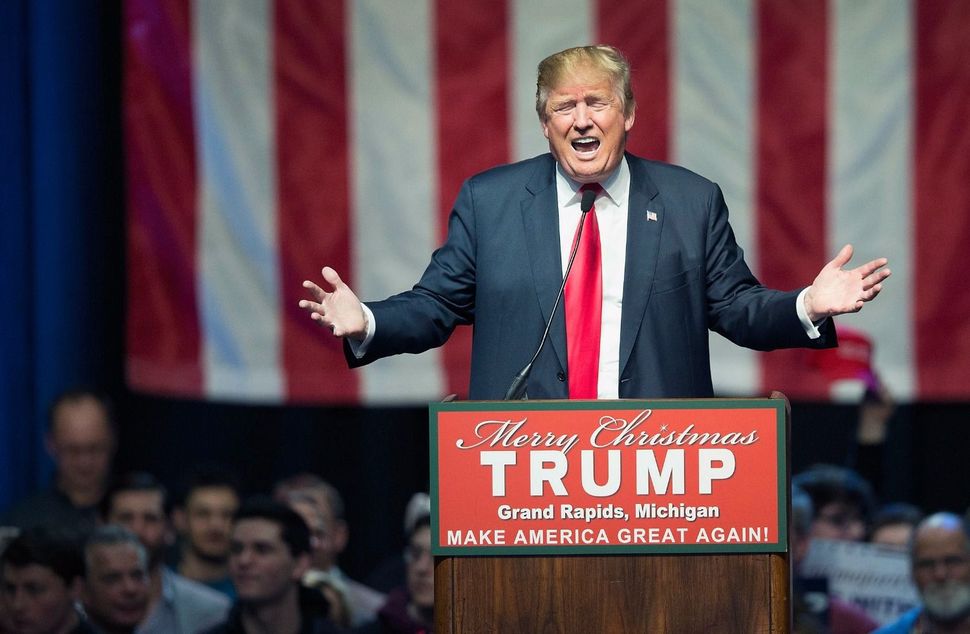 For a time in the early 1980s I was unemployed in Los Angeles and watched a lot of daytime TV. One day I was watching a rerun of “The Newlywed Game,” a quiz show that asked contestants about their spouses’ habits to see how well they knew each other. In this segment, the question was: “What is your husband’s favorite spray or shpritz?” Nobody on the set knew what a “shpritz” was — not the contestants, not host Bob Eubanks, not the in-studio crew he turned to for help.

Stumped, the first contestant ventured that it sounded like a beer, and named her husband’s favorite brew. The others followed suit and the game went on. Apparently the Jewish writer had handed in the script and gone home, blithely assuming everyone knew “shpritz” was simply another word for spray or fragrance. It turned out not everyone on daytime TV knows Yiddish.

It became clear to me that day that a little Yiddish can be a dangerous thing. The lesson came back the other day, as the furor erupted around Donald Trump’s use of the word “schlonged” to describe Hillary Clinton’s 2008 loss to Barack Obama. In case you just got back from a week on Mars, the word has touched off an explosion of indignation on cable news and the Internet. Trump’s critics note that “schlong” is a Yiddish noun crudely denoting the male member. They protest that Trump has turned it into a crude verb, evoking “raped,” to humiliate Clinton. Suddenly everybody in America is learning a little Yiddish.

The trouble is, that’s not what happened. He didn’t make it up. “Schlonged” isn’t just “schlong” plus “-ed.” Some background: I grew up on Long Island in the 1950s and ’60s, not too far from Trump’s Queens neighborhood and around the same time. Where we lived, “schlonged” was an utterly commonplace slang term meaning “clobbered” or “thoroughly defeated.” It gained particular currency after the Mets set up shop. It had nothing to do with male anatomy, at least not in the minds of anyone I knew.

Well, I posted this thought on Facebook Tuesday night. I added that the current furor struck me as “an opportunity for another hit by a lot of folks who clearly never stopped over to look around in the wasteland between the Midtown Tunnel and the Hamptons exits.”

The post got a flood of responses. The bulk fell into two categories. One group said “schlonged” must be vulgar because Trump said it. The other group had never heard of “schlong” being anything but a noun meaning penis and were certain nobody else did either until Trump made it a verb, so there.

One reader, however, took my thought and researched it. Josh Marshall, editor of the always essential TalkingPointsMemo.com, posted my argument on his blog, adding that he’d never heard “schlonged” used the way I had.

He also cited a Washington Post interview with Harvard psychology and linguistics scholar Steven Pinker, who was certain Trump made it up. Pinker offered an elaborate explanation of how the mogul might have confused “Yiddish words beginning with ‘schl-‘ or ‘sch’.” And why did Pinker think Trump stumbled thus? Here’s why:

“Trump’s problem? He’s a gentile who, linguistically, may have wandered too far from home.”

Pinker’s problem? He’s from Montreal. It’s one of my favorite Jewish towns, but it’s not Queens or Long Island, where, as Long Island homeboy Lenny Bruce observed, everyone is Jewish, “even if you’re Catholic,” and where a Catholic kid I knew in Queens was once asked his religion in school and innocently replied, “I’m goyish.”

Well, on Wednesday Josh Marshall returned with an intriguing follow-up, based on readers’ responses to his initial post. What he found was a split. Anyone who grew up “in a certain era (say 1945 to 1965) and in a certain region (Queens and adjoining Long Island)” recalls “schlonged” as “a commonly used phrased, most often used in a sports context, which meant getting clobbered or beaten.”

Moreover, “at least from the youthful memories of our witnesses,” the word “could be used without the users having a strong conscious sense of any sexual meaning behind it.” (Not subconscious either, Josh. If you grow up hearing two similar-sounding words with what you’ve always assumed are unrelated meanings, it won’t necessarily occur to you to wonder if someone else hears them differently. More likely, you’ll assume that everyone knows the words you know — like “spray” and “shpritz.”)

By contrast, Josh reported, anyone who grew up anywhere else, or in the same place but in later decades, stated firmly that “they have never, ever heard the phrase used in this way.”

Some readers suggested that “schlonged” wasn’t even derived from Yiddish, but from the German word schlang, meaning “ate.” Josh concluded, though, that based on the “available evidence” it was likely “a particular Queens/Long Island Yiddish-derived neologism that sprung up mid-century but also died out within a generation or so. But it’s still remembered by men who knew and used it at that time.”

He added: “One might also counter, aren’t these men in their 60s and 70s just more tone-deaf to sexually offensive phrases? That is definitely possible. Indeed, a generational component goes without saying. I will leave that analysis to others.”

I should note, by the way, that kids I knew from the Bronx used “schlonged” the same way we did. Mostly when talking about what their Yankees did to our Mets. That’s how we talked. Even the goyish kids.

I can’t repeat everything in Josh Marshall’s smart piece. It’s well worth reading in full.

But it reinforces my Facebook conclusion: There are plenty of excellent reasons to dislike Trump, but this isn’t one of them.

Why does any of this matter? It comes down to this: Trump’s extraordinary appeal arises from a widespread feeling in many precincts, particularly among working-class white men in flyover country, that government and the politicians who run it aren’t addressing the things that worry them. They’re constantly being talked down to, given a runaround in rivers of fancy rhetoric. They’re reprimanded for being rude, for not attending to the troubles and sensitivities of various other unfortunates, while their own mounting troubles are ignored.

Now along comes a rich guy — what American doesn’t love a winner? — and gives it back to the smarty-pants crowd in exactly the language they’d use if they had the chance. And what’s the response to Trump’s — and their — complaints? Of course: He’s reprimanded for being rude, for not attending to someone else’s troubles. Q.E.D.

But wait — what’s their guy’s latest offense? Why, misusing Yiddish (whatever that is)! What better way to stir the conscience of Kansas?