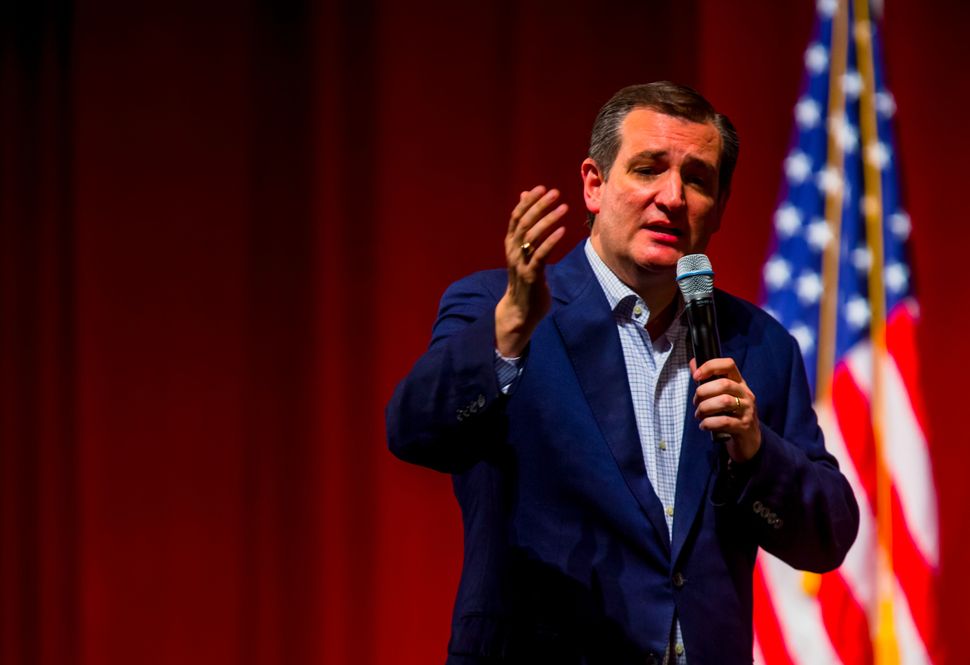 Republican Jews are engaging in a to back Ted Cruz as the likely alternative to Donald Trump, but they seem to be missing the irony of their actions: They’re backing a candidate largely because he is pro-Israel, when his real motivation for taking that stance is that it fulfills a New Testament prophecy in which Jews are thrown into the Lake of Fire.

I get that now’s a tough time to be a Jewish Republican. What has largely inspired Jewish conservatism over the decades is, understandably, pro-business economic policy for wealthy and entrepreneurial Jews and hawkish Middle East policy for those who are one-issue Israel voters.

GOP frontrunner Trump has all but promised an international trade war and has consistently waffled on foreign policy, making him a tough sell for the Jewish right. With the Republican presidential crowd thinning and little sign of an establishment alternative coming out of a brokered convention, reports show conservative Jewish donors are making their peace with Cruz, a far-right evangelical Tea Partier who is despised by both the left and the GOP establishment, and whose reference to “New York values” was widely considered an anti-Semitic dog whistle.

On his campaign website, Cruz boasts plenty of Jewish supporters, including the December endorsement of two-dozen rabbis that his campaign says represents the votes of 10,000 people. The rationale in these cases? The senator opposes the Iranian nuclear deal reached by the Obama administration and he is pro-Israel. He has sold his own faith as a form of respect for Jewish spirituality.

As an extreme right-wing evangelical, his philo-Semitism is suspect at best, especially because he’s shown intense scorn for other groups of non-Christians, such as Muslims. The suspicion is that his affinity for Israel has little to do with a concern for the Jewish state’s security, and much more to do with the fulfillment of the New Testament prophecy in which the Jewish people’s return to Israel brings about the End of Days.

At the moment, righteous Christians will be welcomed into the Kingdom of Heaven. The Jews? Unsaved if not converted.

Obviously, this is not the core of the Jewish Republican agenda. The usual response to this Christian idea is to either doubt it or ignore it — some say it’s a myth that anyone actually believes it — or to accept that some Christian Zionists believe it with the understanding that such a theology is less important than their material support for Israel.

This position, too, has given extreme evangelism an edge over mainstream Christianity when trying to align with the Jewish right; the Methodist Church has been a frequent critic of Israel and Pope Francis raised eyebrows when the Vatican recognized the state of Palestine.

So Jewish acceptance of the Cruz position has to be based on either cynicism or some variant of willful ignorance of the extreme evangelical position. Neither is an endearing quality.

Ironically, there’s a similar phenomenon among pro-Palestine activists who embrace anti-Zionist Hasidic Jews, conveniently ignoring the fact that these Jews’ stance has little to do with a concern for human rights for Palestinians, but is a rejection of a nationalist cause they feel prematurely moves the hand of God. That’s a problem, too, since any discussion about peace in the Middle East should begin with honest and open motivations.

The political bargains that conservative Jews are making with someone like Cruz aren’t just extreme; they’re also based on dishonesty. After all, there is an option for them in 2016. Former Secretary of State and Democratic presidential hopeful Hillary Clinton is an ally of big business interests and is reliably pro-Israel — just look at the forceful speech she gave to AIPAIC this year.

But old habits die hard, and breaking political loyalty is a big deal for any partisan. For any Jews to side with Cruz exposes the logical dead end of this kind of Jewish conservatism. Sure, he says the things Jewish neoconservatives want to hear, but it rings a little hollow if one’s advocacy for Israel — allegedly a promotion of liberal democracy in a region full of autocracy — is pinned on a lone wolf radical whose entire candidacy appears to be a crusade against the Enlightenment. Remember that Cruz’s New York primary campaign included a meeting with notoriously anti-gay politico Ruben Diaz Sr. and that he railed against, of all things, the right to masturbate.

Given that this segment of the Jewish community shakes its fists at anyone willing to negotiate with so-called enemies of the Jews, for them to give a campaign dollar or even a vote to Cruz at this point takes a large dollop of chutzpah.