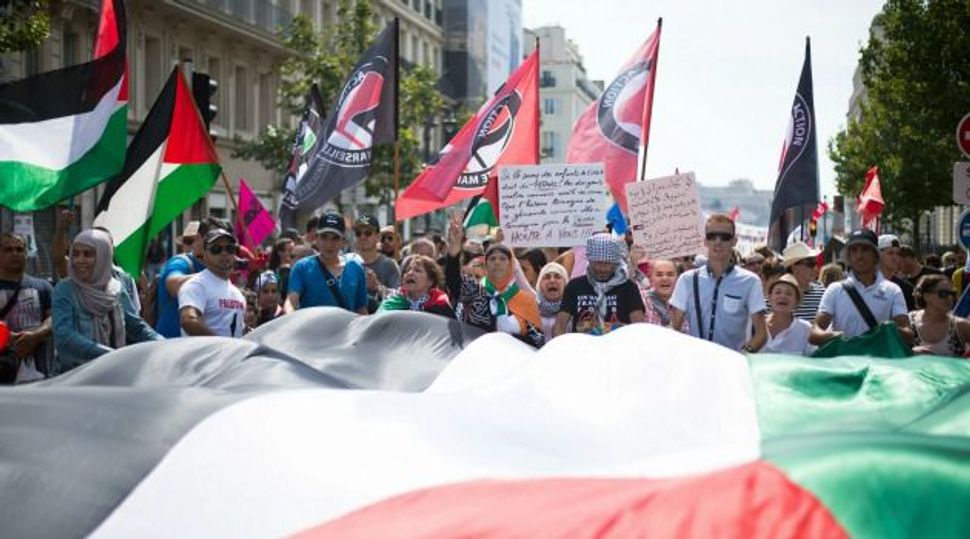 A pro-Palestinian demonstration in Marseilles in August. Image by Getty Images

Last week I wrote about Malia Bouattia’s derogatory comments about her university Jewish society and Husam El-Coolaq calling Tzipi Livni smelly. Given Bouattia’s position as the new head of the National Union of Students in Britain and given El-Coolaq’s comment at a public event at Harvard where he is a law student, it seemed as though they should have known better. But they are insistent that they are not anti-Semitic. Which I hope is, in fact, the case. I thought I’d write this to help people not be anti-Semitic when they are criticizing Israel.

Because, in recent months, a number of well educated politically progressive anglophones have objected to being called anti-Semitic when they are “only” anti-Zionist. Since Zionism is the belief, enshrined in international law and affirmed by the United Nations, that Jews have the right to self-determination and a state in the land of Israel where they have lived continuously for thousands of years, you’d have thought that it would be fairly uncontroversial. But no. So, though you can be anti-Zionist without being anti-Semitic, most people who self-describe as such actually mean that they are critical of Israeli laws, policies or actions. As well as probably being what you mean to say, from a rhetorical perspective it’s a lot easier to be critical of Israel without making an anti-Semitic comment than an anti-Zionist one.

On one loathsome podium stand folks who believe that, unlike every other nation state that European enlightenment politics has foisted on the world, Israel has no right to exist. No one is even calling on Syria to be disestablished. Syria, for goodness sake — a state given its boundaries and its independence from the French Mandate in 1946, and ruled for the benefit of the Ba’ath Party since 1963, whose commitment to oppression has killed half a million Arabs in the past 5 years — is still seen as inviolate.

On an equally precarious podium are those folks who say that since Israel is the only Jewish state in existence, any attack on it, or on its actions, must of necessity be anti-Semitism.

In the middle are a number of people who find some of the laws, actions or policies of the Israeli government anything from mildly troubling to deeply appalling across a spectrum of issues. This broad middle includes those who favor different aspects of the Boycott, Divestment and Sanctions movement and those who oppose BDS.

But, for all of those people — Jews and non-Jews alike who find the U.S. Department of State’s “3D” definition unhelpful (what does it mean to demonize, delegitimize or use double standards anyway?) — here is a rough guide to help your anti-Zionist comment not be plain anti-Semitic.

Your anti-Zionist comment can be anti-Semitic even if you are Jewish. Just because a woman, for sake of example, says something derogatory about women, it doesn’t excuse its misogyny. Andrew Pessin makes a more comprehensive case about the Jew-washing of anti-Zionism, but you don’t have to agree with his argument to note that Jews can make anti-Semitic comments.

Even Angels Can Be Wrong

Your anti-Zionist comment can be anti-Semitic even if you, in every other second of your waking life, work to empower the oppressed and have not a racist ideology in your head. Those attributes simply make it easier to say sorry afterwards. One comment doesn’t stain your entire being, but equally, your entire being doesn’t excuse the comment.

The chairman of the soccer anti-racism group Kick It Out, Lord Ouseley, explained when an English Premier League player was banned for calling an opponent (in Spanish) “Negro,” “This charge is not saying Luis Suarez is a racist. It’s saying, on this occasion, he used racist language.”

Your anti-Zionist comment is anti-Semitic when used in conjunction with any historically anti-Semitic slurs (e.g. “Zionists” are smelly, money grubbing, media-controlling, bank-monopolizing etc.).

Your anti-Zionist comment is anti-Semitic if you say you hate Zionists. People don’t hate political philosophies enshrined by international law. You can find neo-liberals morally bankrupt, you can find neo-conservativism (by the way, not enshrined by the U.N.) dangerous, you can even find democracy, as Churchill did, to be “the worst form of government, except for all the others.” But you don’t hate democrats, or Democrats, or Republicans.

Your anti-Zionism is anti-Semitic when you equate or compare Israel with Nazi Germany. The edge case is Yeshayahu Leibowitz, a profoundly serious ultra-Orthodox Jewish philosopher and winner of the Israel Prize who coined the term “Judeo-Nazi.” His case is arguable — though I’d say it is still anti-Semitic — but if you are not Leibowitz and you liken an expansionist state at whose heart was the industrial extermination of the Jews (as well as the racial and eugenic cleansing of areas under its control), to the only Jewish state, you are engaging in anti-Semitic speech.

And, as with all racist comments, one apology for anti-Semitism is welcome, but when you need to make two apologies it’s getting to be worrying. At three you may need to check your prejudice.