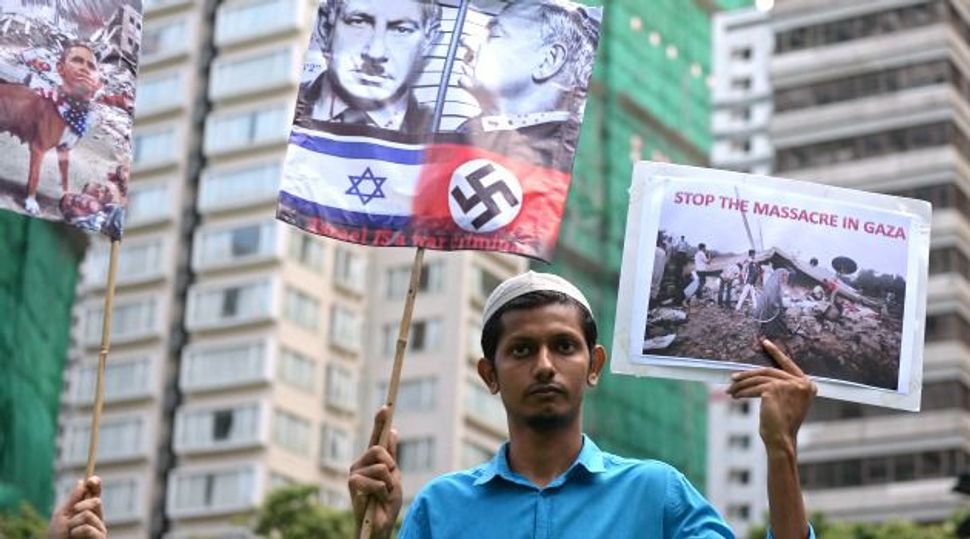 Since Israel launched its military operation in Gaza, other countries are seeing an increase in anti-Semitic hate speech and attacks. In France, synagogues are being firebombed. In Belgium, coffee shops are barring Jews from entry. In Chicago, leaflets threatening the Jewish community are being discovered on parked cars. In India, Jewish sites are being threatened with terrorist attacks. And all around the world, protests that start out as “pro-Gaza” or “pro-Palestine” or “anti-Israel” or “anti-Zionist” are quickly devolving into pure, old-fashioned anti-Semitism.

For many American Jewish liberals, this trend is deeply dispiriting — and confusing. They’ve spent years arguing that anti-Zionism and anti-Semitism are two different things, that the former isn’t necessarily rooted in the latter. But now, they complain, that argument is becoming harder and harder to sustain. The lines are getting blurry. If these protesters don’t actually hate Jews, they ask, then why do they keep conflating Jews and the Israeli government? Why are they resorting to this anti-Jewish — and not simply anti-Israel — rhetoric?

Or, in the words of recent Forward contributor Tova Ross:

When angry protesters shout “Death to the Jews!” at “anti-Israel” rallies in Antwerp, Berlin and London, and Jews are trapped in a Paris synagogue and firebombed by an angry mob, how can you honestly posit that anti-Zionism has nothing to do with anti-Semitism?

My response to that question is: Of course the two have something to do with one another — of course they’re uncomfortably intertwined — and are you really so shocked by that?

Is it really so hard to understand why — after Jews have spent decades telling every Jewish child that they are owed a free trip to Israel, citizenship in Israel, life and land in Israel purely by virtue of being Jewish — the world is slow to distinguish between Jews and Israel?

Dear Diaspora Jews, I’m sorry to break it to you, but you can’t have it both ways. You can’t insist that every Jew is intrinsically part of the Israeli state and that Jews are also intrinsically separate from, and therefore not responsible for, the actions of the Israeli state. You can’t support or attend a Birthright trip, the basic premise of which — just look at the name — is that a Jew has only to be born to win the “right” to romp all over Israel, and then act all surprised when these things are conflated. You can’t applaud Israeli Prime Minister Benjamin Netanyahu when he goes around calling himself “the leader of the Jewish people,” and then get all huffy when Arabic-speakers use a single word to denote “Zionists” and “Israelis” and “Jews.”

I am not saying that the semantic slippage from anti-Zionism to anti-Semitism, which we’re seeing so much of at Gaza rallies these days, is excusable. What I am saying is that it’s not surprising. I wish we would all stop acting so shocked by it — and, instead, acknowledge the ways in which Jewish words and actions have helped to blur these lines.