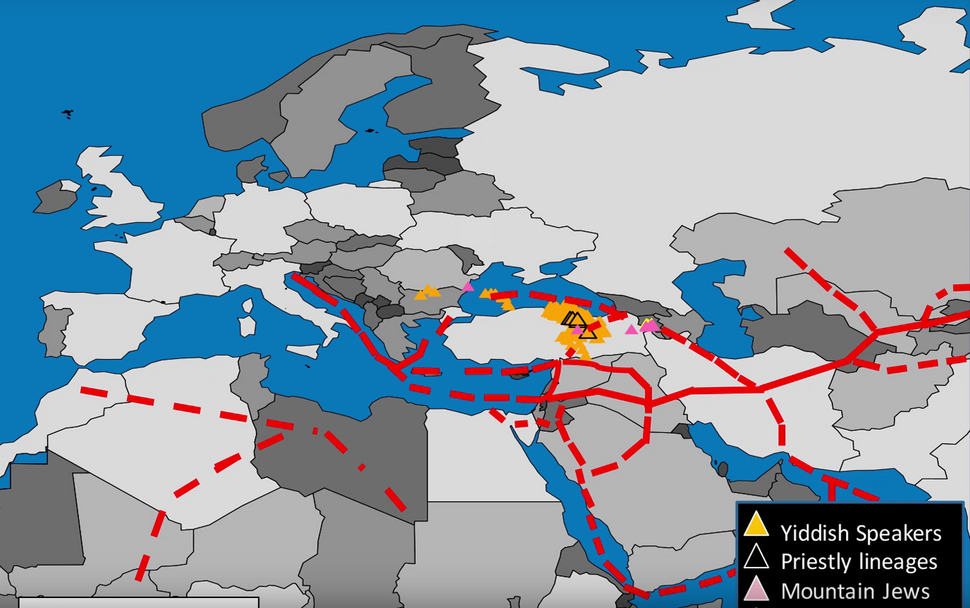 When I first saw the short film from Sheffield University featuring Dr. Eran Elhaik claiming that Yiddish has its roots in Turkey, I thought it must be an elaborate ruse, a Sacha Baron Cohen-esque prank to poke fun at the sometimes inane world of academia. But I soon realized that it was, alas, all too real.

Of the many dubious pieces of evidence presented to support Elhaik’s unorthodox theory is the fact that four villages in ancient Turkey once had names that sounded something like Ashkenaz. Later in the film Elhaik explains, without a trace of humor, that Yiddish-speakers talk “like Yoda” and he even mentions Yoda’s use of unusual terms like “Jedi” and “wookies” to demonstrate Yiddish’s linguistic properties. Dr. Elhaik, using a tool he designed called Geographic Population Structure, which he believes can pinpoint the origins of an ethnic group according to its DNA, published an article in the journal “Genome Biology and Evolution” in which he elucidates his theory.

According to his understanding of Jewish history, Ashkenazi Jews originate from four small villages in Northeastern Turkey along the Silk Road. There the first Ashkenazim, who were Iranian Jews, Judaized the “Greco-Roman, Turk, Iranian, Southern Caucasus, and Slavic populations inhabiting the lands of Ashkenaz in Turkey.” These “Slavo-Iranian” Jewish merchants “invented” Yiddish over 1,000 years ago in order to aid their monopoly over the local trade through speaking a secret language.

As proof, Elhaik notes that “our findings are in agreement with an alternative theory that suggests Yiddish has Iranian, Turkish and Slavic origins and explains why Yiddish contains 251 words for the terms “buy” and “sell.” This is what we can expect from a language of experienced merchants.”

To understand just why this theory is so ludicrous, it’s worth mentioning that with the notable exception of artificially constructed ones like Esperanto, languages are not purposefully “invented” by their speakers but develop naturally over hundreds of years. Furthermore, since there are virtually no words and absolutely no grammatical structures of Turkish or Persian origin in Yiddish, Elhaik cannot provide any linguistic evidence for his theory that these languages ever played a role in Yiddish’s development.

Even more suspicious: he cites Dr. Paul Wexler’s theory that Yiddish is not a Germanic language but really a Slavic tongue that developed when early medieval Sorbian became relexefied with Germanic words. Wexler’s theory, despite being rejected by every Yiddish linguist except for Wexler, is presented by Elhaik as a legitimate alternative theory to the otherwise universally accepted view that Yiddish is a Germanic language. Elhaik contends that before this form of alleged Sorbian evolved into Yiddish that it was originally a form of Persian. The only attempt in his paper to prove this theory is a 9th-century quotation stating that some Jewish merchants in Turkey could speak German and Slavic languages. As you’ve probably guessed already, Wexler is himself a co-author of the paper that appeared in “Genome Biology and Evolution.”

While I have more than a sufficient background in linguistics in general and Yiddish linguistics in particular to dismiss Elhaik’s theories out of hand, I lack the necessary background in genetics to judge the efficacy of his GPS system. There are indications, however, that his method is just as dubious as his linguistic theories. In 2013, Elhaik published a similar theory about the supposed Turkish/Khazarian origins of Ashkenazi Jewry. As reported at the time in The Forward, nearly every expert in the field of Jewish genetics attacked his work in both the scholarly and general press. Elhaik, who was then a post-doc at Johns Hopkins University, told The Forward that his colleagues were “liars” and “frauds.”

Such theories would pose no harm if they were merely a bizarre curiosity for the press. Unfortunately, anti-Semites may grab hold of this research to further their anti-Semitic conspiracy theories, citing it as proof that Jews are not a real people — or worse, that the Jews are con artists who use their “invented” identity as part of a great fraud against the peoples of the world. (Interestingly, former Klansman David Duke has actually taken the opposite approach, attacking Elhaik’s work for denying that Jews are a “race.”)

It’s important to note that Elhaik has stated that he doesn’t feel that his work should have any impact on contemporary political concerns and that he is uncomfortable with how anti-Zionists make use of his ideas. Intentionally or not, however, such dubious scholarship brings no honor to the Jews, let alone the Yiddish language.

But Elhaik’s work does do a great job of highlighting failures in the way that journals (even prestigious ones) peer-review articles and how they can lead to the publication of junk science. I’ve noticed quite a few times that when scientists in fields unrelated to historical linguistics publish articles on the history of language in natural science journals their work often exhibits a complete and utter lack of understanding of the basic principles of how languages function or evolve. Unfortunately, the failure of academic journals to bring in peer-reviewers from fields outside the journal’s immediate focus is hardly unique to Elhaik’s article or “Genome Biology and Evolution” or even linguistics; it is an Achilles heel across academic publishing that impacts everything from history to literature and medicine. And just as with Elhaik’s article, the popular press and even prestigious newspapers often parrot the results of these improperly vetted articles as if they were completely verified findings.

If only Elhaik’s work were parody, it could be commended for highlighting these failures.

Jordan Kutzik is a staff writer and social media coordinator at the Yiddish Forward.

This piece has been translated into English from Yiddish by the author; read the original, published in Forverts on April 25, here.