What Can Jews Do About Police Violence After Shootings — and Dallas? 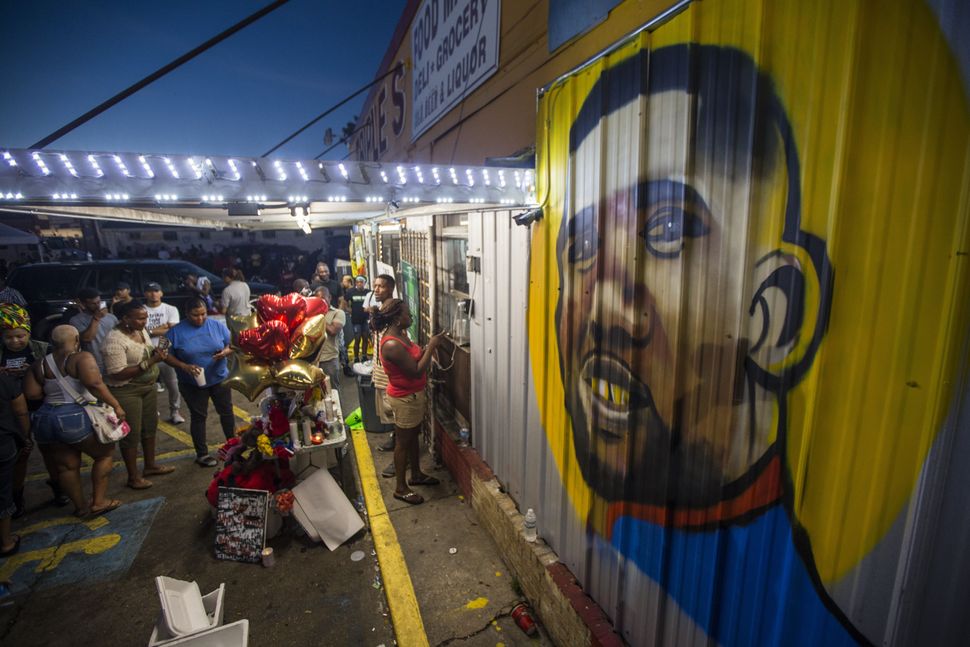 “Your brother’s blood cries out to me from the ground!”

The ground this week is not East of Eden, where Cain slew Abel; it is St. Paul, Minnesota, where Philando Castile was gunned down while reaching for his ID. It is Baton Rouge, Louisiana, where Alton Sterling was shot at point-blank range, already immobilized and pinned down by police.

And while you, reader, are not Cain — after all, you did not pull the trigger — neither can any of us object, as he did, “Am I my brother’s keeper?!” We are our brothers’ and sisters’ keepers, as Americans, as mostly-white and mostly-privileged Jews, as participants in a society where so many tragedies become travesties of racial injustice.

But what can we do? What can I do?

First, we must, communally, recognize that this is a real crisis and make it a subject of dinner conversations, rabbinic sermons and communal action. Because in fact, the problem isn’t just the cops; it’s us.

Thanks to the proliferation of recording technologies, the crisis of police violence is now more visible than ever before; Castile was killed live on Facebook. Indeed, as best as we can tell, the rates of violence haven’t risen much; we’re just seeing the evidence of it more.

Yet even in the face of gruesome videos, there is still a great deal of denial among white Americans that the deaths of Eric Garner, Laquan McDonald, Mike Brown, Sandra Bland, Rekia Boyd and now Castile and Sterling, are, in fact, a crisis of police violence against people of color. After all, none of the officers were found guilty in a court of law; they had reasons to believe they were in danger; these things happen.

But these things don’t just happen. Yes, most police officers are diligently doing their jobs and keeping us all safe. Painting with a broad brush is not only inaccurate, but leads to tragedies such as the shooting deaths of three police officers at a Dallas protest this week. At the same time, the statistics paint a convincing, terrible picture.

Over 1,000 people are killed by police every year, nearly 60% of whom were either unarmed or should never have been stopped in the first place. Compare that number to other countries. Germany had 6, Britain, 2; Japan, 0. What the hell is wrong with us, as a country?

One problem is how we police. “Quality of life” policing is a gigantic dragnet, ostensibly based on the “broken windows” theory that even petty crime leads to a deterioration of law and order in general. In practice, however, it creates confrontations where none need to exist. And then “these things happen.”

I’ll give you an example that isn’t in the news, and isn’t based on race. Just last week, an acquaintance of mine was relaxing on a beach when his towel slipped off. He wasn’t wearing anything underneath. This was a minor infraction of the law — but my friend was suddenly jumped by five police officers (two in civilian clothes), pinned to the ground and dragged, naked, off the beach while he pleaded for help.

That entire confrontation should never have taken place. At most, he should have been given a citation; really, he should have just been warned. But, presumably because that particular beach is popular with LGBTQ people and with people of color, someone, somewhere, decided that a crackdown was necessary. Thank God my friend didn’t resist arrest; he, too, could have been a statistic.

“Broken windows” must end. “For-profit policing,” in which cops are given quotas for minor offenses in order to generate revenue and evaluate police performance, must end. Profiling must end. Escalation of minor incidents must end. The philosophy must change.

Another problem is how police are trained and reviewed. In many places, cops are not adequately trained to balance protecting safety (their own and others’) with defusing conflict. They respond, routinely, with overwhelming and often deadly force to situations that could be resolved without it. They are often scared kids, put into stressful situations with inadequate mental resources.

The rules of engagement must be changed at the training level and the legal level. States and cities should adopt international standards for the use of deadly force — both as cops are trained and as their actions are reviewed. Standards of review should be changed.

And of course, cameras should be placed on every cop in America — with strict rules that civilians’ faces be obscured before any recording is released to the public. This should help the vast majority of cops, since recordings help explain and defend appropriate conduct as much as they reveal misconduct. And in addition to holding bad cops accountable, body cameras could help prevent misconduct from happening in the first place.

Yet of the 509 fatal shootings by police that have taken place this year, body cameras were worn in only 64 of them. Who knows how many of the remaining 445 lives might have been saved, or what we would have known about the circumstances of their deaths?

Another problem is weaponization. The last two decades have witnessed a massive militarization of civilian police forces. Town sheriffs are buying tanks, military-grade weaponry — it’s outrageous and dangerous and unwarranted. Arm cops to the teeth, and they will use the tools they’re given.

And then, of course, there’s race.

Of those 509 people fatally shot by police so far this year, 202 were black or Hispanic. Young black men were killed at five times the rate of similarly-aged white men. Even taking into account higher crime rates in communities of color, this has been shown by exhaustive, detailed studies to be disproportionate. According to once such study, correcting for all these and other factors, the probability of being black, unarmed and shot by police is 3.49 times the probability of being white, unarmed and shot by police.

That’s why we need #blacklivesmatter and not #alllivesmatter: because when it comes to police violence, black lives clearly matter less.

Part of this is demographics: White men are less than one third of the U.S. population, but they are two thirds of police officers. Most of them are not overtly racist. But unconscious bias affects all of us, no matter how well-meaning we are. That’s what white privilege is: precisely that which is often invisible. And when it comes to cops, we’re talking about life and death. This, too, must change, through recruiting, training and changes in the way our entire society talks about race.

Finally, while I doubt those Forward readers intending to vote for a candidate espousing white supremacy will ever be persuaded by evidence, it’s worth bearing in mind the yawning gap between the presidential candidates, and political parties, on this issue. Hillary Clinton has proposed creating national use-of-force guidelines, ending all forms of racial profiling, and improving training in conflict de-escalation.

Donald Trump has proposed nothing, but has said “We have to give strength and power back to the police.”

And in this regard, most other Republicans are right on board with him, usually refusing to acknowledge that a crisis is taking place or that is has anything to do with race. This, of course, reflects the racialized preferences of their white, conservative base. (The racism Trump’s candidacy has ignited didn’t come from nowhere.) It is also reprehensible.

As on so many other issues — climate change, gun regulation, the wealth gap — the Republican Party is on the wrong side of justice. If Trump is elected, more innocent black people will die. It is that simple. And those #StillBernie lefties still spreading calumnies about Clinton in the name of this or that pet issue should reflect on that.

Now, I didn’t come up with a single solution in this column. They and others are listed, and described in detail, on the websites of Campaign Zero, the Center for Popular Democracy and the Presidential Task Force on 21st Century Policing: ending “broken windows,” limiting use of force, demilitarization, body cameras, oversight, et cetera.

And yet, each time something like this happens, we white people ask ourselves “What can be done?” often throwing up our hands in despair. When in fact, a lot can be done. The problem is that around half the population doesn’t want to do it.

So, ironically, we need to make this crisis worse. Police violence against people of color requires local involvement, pushing for city- and county-level reforms. That gives Jewish communities, and other organized groups, unique leverage to make change — if we care enough to do so. Unfortunately, too many of our fellow privileged Jews aren’t “woke” to the crisis or the ways to address it. While God may hear the cries of our brothers’ blood, we are often deaf to them.

What Can Jews Do About Police Violence After Shootings — and Dallas?