Sorry, Evangelicals, You Can’t Play the Trump Card and the God Card at Same Time 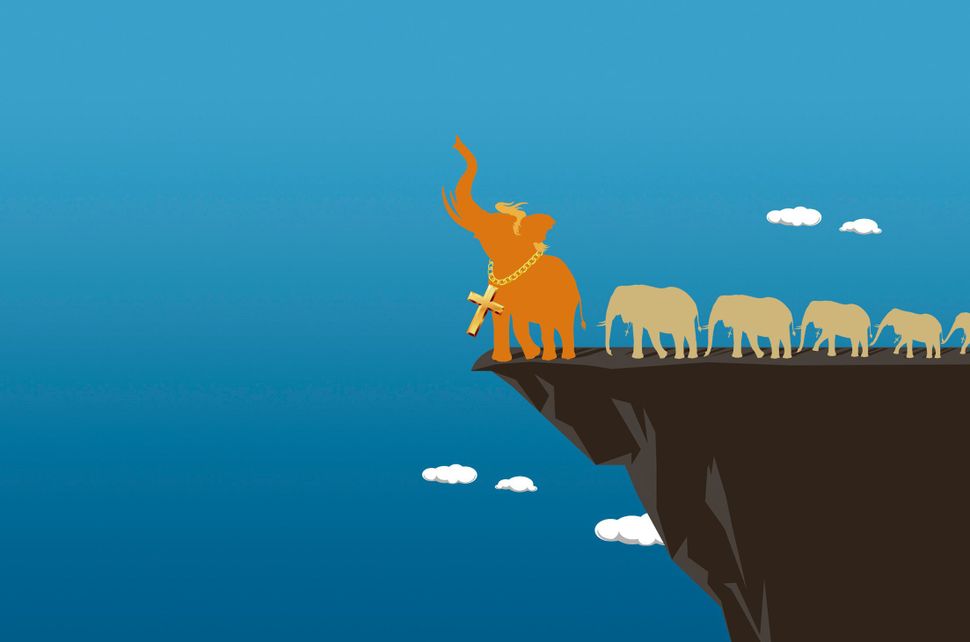 Did you catch Donald Trump on “60 Minutes” recently, when he gave the first interview with his new running mate, Indiana Gov. Mike Pence?

Lesley Stahl was asking about the “chemistry between you two” — it sounded as if she were interviewing them for a dating website — noting that Pence was very low-key and very religious and that Trump was a brash New Yorker, when The Donald interrupted her. “Religious,” he said.

And then, by way of proof, he offered, “Hey, I won the evangelicals.”

Now, that is true. Trump won the evangelical vote in the primaries, a point he proudly noted in his acceptance speech. Not only that, but polling released days before the interview by the Pew Research Center showed that he has the support of 78% of white evangelical voters nationwide. And that was before he chose the born-again Pence as his vice presidential sidekick.

But saying “I’m religious because evangelicals vote for me” is like saying Barack Obama is female because he won the women’s vote twice in a row.

I am struggling to understand this. The evangelicals I know — and yes, this nice Jewish girl knows and respects some devout Christian evangelicals — are people whose faith informs their behavior, their politics, their very being. We disagree on many issues, but I can identify the source and motivation for their positions.

Even more, they seek to conduct themselves as Christian in the best sense of that word: with probity and kindness, empathy and love.

I’m not the only one to spot a giant disconnect between this ideal of Christian character and Trump. The Christian theologian, ethicist and preacher Russell Moore, for instance, had this to say: “When you have some leaders pronouncing Donald Trump to be a Christian — despite the fact that he openly boasts and brags about adulterous affairs and uses racially tinged and derogatory speech and a thousand other things, and says he has nothing for which to ask forgiveness from God — that to me is not a political issue. It is a gospel issue, and that has to do with who evangelicals actually are.”

Of course, after hearing such criticism, Trump called Moore “a nasty guy with no heart,” which must have surprised the good people at the Southern Baptist Convention, where he is the respected head of the Ethics & Religious Liberty Commission.

So who are these pro-Trump evangelicals? And why do they support such a candidate?

I talked to folks, read a lot, studied the polling data. What I found is understandable, but ultimately unconvincing.

About 45% say their pro-Trump vote is really an anti-Hillary Clinton stand, so deep is the antipathy toward her. (Which is ironic, since her ethically compromised, philandering husband was notably successful at winning evangelical votes when he ran for president, but whatever.)

To the degree that such hatred is driven by substantive considerations and not plain misogyny, it’s tied up with her liberal views on abortion, gay and lesbian rights, etc., her own ethical lapses, and her alignment with the Obama administration’s foreign policy, which many white evangelicals believe has been seriously misguided, particularly with regard to the Muslim world.

That relates to another finding: a strong attraction to assertive, decisive leadership, abroad and at home, which many of these voters see in Trump. I found a reference to a poll conducted 30 years ago by Steve Mitchell, who runs a Michigan-based research and polling firm, that helps explain the Trump attraction today.

“We found that evangelicals are drawn toward politics by messianic figures,” Mitchell wrote in RealClearPolitics. “Although certainly not Christ-like, Trump is perceived to be strong and bold; a leader that will help evangelicals navigate a world they believe is too often adrift and too different from what they want.”

The attraction to strong leadership is undergirded by an extreme partisanship. Attachment to the Republican Party runs deep among white evangelicals, so I’ve learned, regardless of who is running for president. Mitt Romney’s Mormonism was initially an obstacle for many in 2012, but once he won the nomination, all was forgiven and their vote swung his way.

I get it. In a way, it mirrors the extreme partisanship of most American Jews, whose affinity for the Democratic Party seems to extend far past a particular candidate.

Here’s my struggle: We liberal American Jews view that attachment as a reflection of our faith and values, not a repudiation of them. But white evangelicals seem to bypass faith values to support a thrice-married man who boasts about his sexual exploits, made a fortune from gambling, supported abortion rights and gay and lesbian rights not too long ago, struggles to quote a single verse from the Bible and clearly doesn’t believe in a judgmental God or the Golden Rule.

But it doesn’t matter! As Robert Jeffress, pastor of First Baptist Church, in Dallas, and a Fox News personality, said at a forum in March: “I couldn’t care less about the president’s tone or his language… I want the meanest, toughest, son-of-a-you-know-what I can find in that role, and I think that’s where many evangelicals are. The leaders just don’t get it.”

Ah, but now I do. Here’s the corollary, though: If character and behavior don’t matter to you and your candidates, they shouldn’t matter in judging me, or people like me.

This year’s embrace of Trump robs white evangelicals of any justification for judging others’ behavior, for legislating against us, for preaching about family values and the necessity of maintaining religious tradition. If they want to be unabashedly pragmatic voters who don’t walk the walk, fine. But they’ve lost the moral high ground. I don’t know what their gospel looks like anymore.

Which is funny, because they have pilloried a leader who has conducted himself with great probity and grace, and who exudes family values without a touch of scandal. But the guy who’s been in the White House for the past seven years is also the wrong color, which may sadly hint at the real explanation for white evangelical support for Donald Trump.

Sorry, Evangelicals, You Can’t Play the Trump Card and the God Card at Same Time