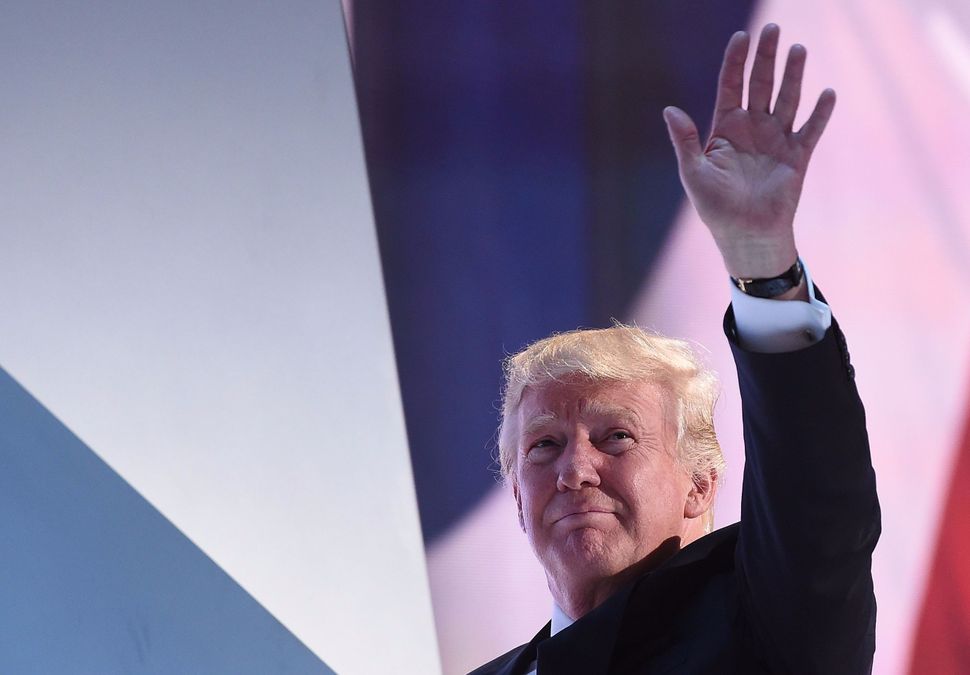 Despite grave reservations, many Jews — including, apparently, the billionaire casino magnate Sheldon Adelson — are supporting Donald Trump because of Israel. They should do the opposite. A Trump presidency would constitute an existential threat to the Jewish state, destabilizing the region at precisely the time Israel yearns for stability.

Let’s put aside a few ancillary issues. For example, that Trump’s followers, especially online, include rabid anti-Semites. His own campaign retweets their posts. And the candidate himself has said nothing about the shocking anti-Semitism in the Republican National Convention’s own chatrooms.

Let’s also ignore some disturbing comments from Trump himself. In February, for example, he remarked that he would be “neutral” on Israel on Palestine, placing Trump to the left of every American president since Eisenhower, including Carter and Obama. (He backtracked a couple of weeks later.) And several times, he has characterized Jews as good with money, or money-obsessed, an anti-Semitic cliché.

And finally, let’s set aside the questions of whether an “Israel First” voting policy fulfills one’s duty as a loyal American citizen, or is even a smart idea, given Israel’s dependence on a strong, stable United States. If our country declines, especially in favor of Russia or China, Israel will suffer.

Let’s focus instead on four direct, dire threats that a Trump presidency would pose to the State of Israel: his inconsistency, his extremism, his volatility and his isolationism.

Look at the mess that resulted when President Obama drew a line in the sand regarding Syrian chemical weapons and then allowed Syrian President Bashar al-Assad to cross it. Our allies relied on us, our adversaries (i.e. Russia) made their calculations — and Obama balked. The result has been a strengthening of Russia, a defeat of our allies in Syria, and, of course, the most horrifying humanitarian disaster of our current moment.

That was one broken promise.

Now imagine the impact of Trump’s wild, uninformed and contradictory statements on the Middle East. They would destabilize an already unstable region, destroy trust in the United States and further isolate Israel.

For example, Trump has said the United States should declare war on ISIS. Would that include ground troops in Syria and Iraq? “Very few,” he said in a recent “60 Minutes” appearance. “We’re going to get neighboring countries involved.” How? By threatening to end oil purchases from Saudi Arabia and other allies, which would create an immediate recession and alienate our allies in the region.

More broadly, Trump has wildly oscillated between extreme interventionism — putting troops on the ground in Syria, for example — and extreme isolationism, ending decades-long alliances in NATO and elsewhere. As Jeffrey Goldberg has said, “He has no understanding of the post-war international order that was created by the United States.” More uncertainty, instability and isolation — with Israel paying the price. Trump has reversed positions on Hillary Clinton, abortion, guns, you name it. He will say anything, and then, as his former “Art of the Deal” ghostwriter described based on firsthand experience, simply double down on whatever lie he’s told, oblivious to its obvious falsity.

This kind of unpredictability would destroy American credibility and create an uncertain environment in which Israel’s tactitians could never be sure of the status quo continuing. Israel’s most important friend must be reliable, not unpredictable.

Trump’s extreme positions on Islam have already led to a dangerous backlash among Muslim nations. His proposed ban on Muslims entering the United States has already been reciprocated; several Arab states have banned him. His own business partners — moderate Saudi businessmen — have called him “a disgrace not only to the GOP but to all America.”

More broadly, Trump’s candidacy has inspired a rise in anti-Americanism in the region. He confirms the views of Islamic extremists that America hates Islam, and undermines those of moderate Muslims who are our most important allies. One cartoon in a Jordanian newspaper depicted it perfectly, with Trump’s hair merging with the beard of ISIS leader Abu Bakr al-Baghdadi.

A Trump presidency will turn Israel’s few friends into enemies. It will radicalize the Middle East and boost support for ISIS, Al Qaeda, Hamas, Hezbollah and other anti-Western, anti-Israel elements. Indeed, he is their fondest dream.

Supporters like that Trump “tells it like it is,” but the Middle East doesn’t need a bull in a china shop. It needs calm, careful leadership — whatever one’s ideological preferences. Will Trump insult the leaders of Turkey, Jordan and Saudi Arabia, destabilizing American interests in the Middle East? Will his bellicose rhetoric incite violence on the Arab street?

Who knows what Trump might say tomorrow? The man is unhinged and refuses sane advice. Unbelievably, Trump has not ruled out the use of nuclear weapons. He has famously promised to “bomb the shit out of ISIS,” which would entail the murder of thousands of innocent people. Would that not provoke even moderate Muslim nations to react? How could any Arab leader stand by while thousands of Arabs are slaughtered, with such callous disregard for their lives?

Even threats such as these destabilize the Middle East and create chaos where Israel needs predictability. Whatever his view, his temperament endangers Israel.

Consider who wins as America loses — as the United States turns inward (“America First”) and cuts alliances in Europe, Asia and around the world. The winners are Russia and China, neither of which has been terribly friendly to Israel (though China has bought lots Israeli weapons) or to Jews.

Trump admires Vladimir Putin so much — and has pushed for abandoning Ukraine to Russia’s whims — that some have seriously speculated that they are in some sort of league together. Whether that’s true or not, it’s clear that Trump’s isolationism would mean an expansion of Russia’s sphere of influence. Russia — which backs Assad in Syria, which has funded several Arab wars against Israel and which has renewed anti-Semitism at home.

Even if Trump’s isolationism were to make America great again, it would do so at the expense of America’s allies overseas — especially Israel. Trump’s foreign policy would leave Israel stranded in an anthill that Trump himself has stirred up. Israel will be the primary victim of this instability, extremism, volatility and isolationism.

Israel will be the first target for reprisals — not just from a few Palestinian terrorists, but also from Arab armies and rockets. Egypt and Syria will soon resemble Hamas and Hezbollah: extremist, Islamist and violent. And for what? This isn’t a case of risking war because of some important objective or principle. This is risking war for no reason at all, other than the childish psychology of an American despot.

As revealed in Trump’s interview with The Washington Post, this is a would-be leader utterly ignorant of the complex web of relationships on which Israel depends. Israel’s enemies, at least, are somewhat known quantities. Trump could very well lead to nuclear war. Smart, conservative diplomacy is, as Teddy Roosevelt said, to “speak softly and carry a big stick.” Trump shouts loudly and waves his club around recklessly.

It’s well known, at this point, that Trump’s most ardent supporters do not listen to reason. They are voting from the gut — or more precisely, the amygdala, that part of the brain that sends out constant “fight or flight” messages based on threats and fear.

But Sheldon Adelson, if your assistant is reading this, please pause to consider that you are imperiling the state of Israel by supporting such a volatile and ignorant man. You have said you are doing so out of party loyalty. But are you not also loyal to the Jewish people and the Jewish state? Will they not be threatened when the international order is upended?

Don’t just trust your gut. Don’t shoot from the hip. Think for a moment. President Trump would be Israel’s worst nightmare.