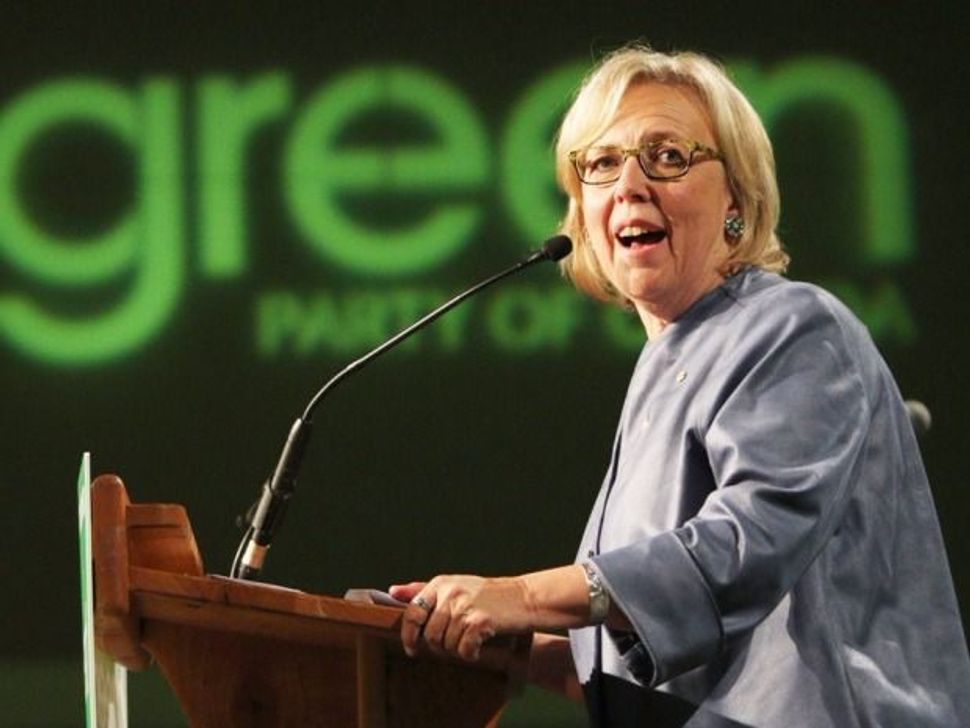 Are left-wing movements in North America inappropriately obsessed with Israel? That’s what many are asking after the intense fallout from the Movement for Black Lives criticism of Israel — and now the crisis threatening to envelop the Green Party of Canada over support for BDS.

After a pro-BDS vote at Canada’s Green Party convention, party leader Elizabeth May says she’s reconsidering her role as head of the country’s fourth-largest party. She’s strongly opposed to BDS, “so if I can’t find a way to bring that back and have the members review it with a consensus decision-making process, then I have to profoundly question whether I can continue as leader and that’s obviously heartbreaking,” she told the Canadian press on August 9.

This makes for a stark contrast with the Green Party in the U.S., where leader Jill Stein fully supports BDS.

In Canada’s Green Party, May, who holds the party’s sole seat in the Canadian parliament, is a force to be reckoned with. But the convention allowed party delegates to bring forth resolutions directly, and BDS won the day.

As BDS discourse goes, the Green Party resolution was pretty bland. It declares the party’s “support” for the use of divestment, boycott and sanctions… that are targeted to those sectors of Israel’s economy and society which profit from the ongoing occupation” until Israel “bans further settlement construction” and engages in “good faith” negotiations towards a “viable, contiguous and truly sovereign Palestinian state.” These two demands fall well short of those issued by BDS movement as a whole, which demands refugee return and full equality between Jewish and Arab citizens of Israel.

The Centre for Israel and Jewish Affairs called the Green Party resolution “sickening” and “shameful,” offering the tired and unsubstantiated claim that the “core of the BDS movement is anti-Semitic.”

Writing in the Forward, Raphael Magarik recently pointed to the role that BDS and other anti-Zionist activities play in mobilizing participants to left-wing causes. But are left-wing activists focusing on Israel to the neglect of other injustices on the world stage?

John Baglow, a progressive Canadian blogger known as Dr. Dawg, insists that the Canadian and global left is not singularly focused on Israel. “There is a cyber-trunkful of stuff on almost every other country in the world,” he said to me. “The material on Brexit alone would fill volumes. There is the matter of the [$15 billion] [Canada-]Saudi arms deal. There is discussion…about Russia and the Ukraine. About Australian concentration camps for migrants. About the new far-right Japanese government…. No one can seriously believe that Israel is our only topic of conversation.” He added that “whataboutism” — his term for the tendency of some Israel defenders to respond to criticism of Israel by pointing to other global human rights abuses — “gets us nowhere.”

Still, none of those other issues were reflected in any party resolutions at the Green Party convention. The human rights issue that got addressed was the one about the Palestinians.

If you ask me, part of today’s BDS clarion call is a reaction to attempts to squelch debate around Israel. It’s an understandable impulse. Consider the preamble to the Green Party of Canada’s resolution. Alongside statements about settlements and international law and sanctions against apartheid-era South Africa, there is this: “WHEREAS the Liberal and Conservative parties recently supported a motion ‘condemning’ attempts by Canadians to promote the boycott, divestment and sanctions movement….”

After ten years under our former prime minister, Stephen Harper, who slavishly adored Israeli Prime Minister Benjamin Netanyahu, the Canadian left has been thirsting for change. But then earlier this year the Canadian House of Commons passed a motion condemning citizens who “promote” BDS. (Liberal Foreign Minister Stephane Dion added that BDS is associated with “anti-Semitism.”) This was red meat to progressives. The parliamentary motion is not binding, but it still sent a free-speech chill down people’s spines.

It’s harder to claim anti-Semitism (though plenty still try) when it’s Jewish groups gravitating to BDS or issuing pointed criticisms of Israel. When it’s political parties, unions and churches, the question is much stickier. But elsewhere I have suggested seven reasons, none linked to Jew-hatred, why the media and others are so focused on Israel. For starters, there’s the giant aid package that the U.S. — which is to say, American taxpayers — provide to Israel each year.

And it’s helpful to remember that a focus on a few dominant issues among activists is not unusual. Just as we saw with the American civil rights struggle, the United Farm Workers grape boycott and the Vietnam War protests of the 60s, the gay rights and women’s movement of the 70s, the anti-Apartheid divestment of the 80s, the anti-sweatshop movement of the 90s, then Occupy Wall Street, climate change and now Black Lives Matter — social justice activists in any given era naturally coalesce around a select number of issues. Nowadays especially, social networking brings people together around a common cause, and awareness and action naturally gather momentum exponentially.

So is the left’s focus on Israel inappropriate? No. Neither is it an aberration.

If people want to divert attention away from the lack of human rights in Palestine, the best way to do that is to help uphold those rights. Address the problem itself, and the global focus on it might just fade.

Mira Sucharov is associate professor of political science at Carleton University in Ottawa, Canada. Follow her on Twitter @Sucharov