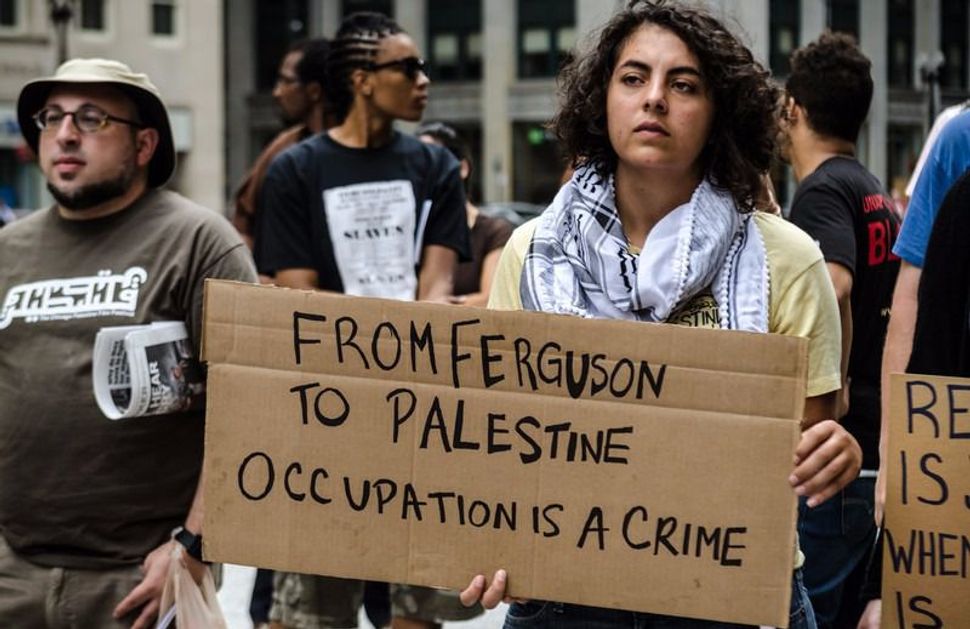 Why did the newly released Movement for Black Lives platform call Israel an “apartheid state” and accuse it of “genocide” against Palestinians? Mainstream Jews and radical activists want to debate the justice or morality of the platform, but neither group is interested in explaining how it came to be. But that means they are missing a basic shift in the American conversation about Israel. From being a third-rail of progressive politics, Palestine has not only become discussable. It is rapidly becoming a compelling, attractive cause that leftist organizations tactically embrace to mobilize their base.

I first observed this shift when my Berkeley student-worker union voted on BDS in 2014. I opposed the resolution, and I complained to my union friends that the vote risked splitting workers and weakening the union. I still oppose BDS, but on the question of whether this was good for the union, I was dead wrong. Not only did the resolution win in a landslide; more importantly, the 2,100 members who voted constituted “one of our local’s historically highest voting turnouts.”

In other words, far from being divisive, BDS organizing proved a good tool for mobilizing members. This stands to reason, too. The union invested significant resources in the vote, even though it has little practical significance. While I know that the union leadership is sincerely pro-Palestinian, an intensive campaign on a remote issue was also surely tactical. Similarly, when doctoral students at the City University of New York endorse BDS amidst a contentious contract fight between the union and the administration, the tactical connection is obvious. Pro-Palestinian student groups are a lively, radical base and an attractive partner.

Tactical concerns like these are rarely discussed. Mainstream Jewish groups still like to pretend that BDS is a marginal fringe, and leftist activists prefer the moral, idealistic language of “solidarity” to the blunt realism of admitting you are pandering to the kids. But occasionally, thinkers on the left explicitly connect the left’s newly intense interest in Palestine with its usefulness in mobilizing youth. When the radical Jacobin magazine convened a forum on Palestine in 2013, for instance, they wrote:

Why now? Because almost without anyone noticing, the movement in solidarity with Palestinian rights… has grown to become one of the most important, inspiring, and fast-growing social movements in the country… the bloom of student interest in this old and bloody colonial conflict is something the Left ought to take interest in, because the Left is not just an idea but also the masses in motion, and scarcely anywhere… are young people in motion with such a mix of revolutionary élan and disciplined militancy as they are in the case of Palestine.

To be clear, I have no doubt that the Jacobin editors, the graduate student union leaders and Black Lives Matter activists sincerely believe in the Palestinian cause. But leftists sincerely believe in many causes, and as Jacobin makes clear, they choose which to highlight for the same reasons other political groups (and for that matter, Jewish donors) do: to attract and energize members, particularly youth.

We Zionist Jews must face Palestinian solidarity’s appeal. Mainstream American Jewish organizations have adopted a policy reminiscent of the Karthoum Resolution: “no peace with BDS, no negotiations with BDS, no recognition of BDS.” The thinking here, again, is tactical, not just moral. Leftist Zionists like Peter Beinart and J Street are debated and attacked, but BDS is exiled and marginalized from synagogues, Hillels and federations. Even liberal Jewish intellectuals typically refuse to debate anti-Zionists publicly. The whole mainstream Jewish world is betting that radical pro-Palestinian activism can be simply pushed out of the American public sphere entirely.

A decade ago, this might have been a smart strategy. But BDS’s growing appeal suggests that marginalization is increasingly unrealistic. No longer is it going to be effective to label anti-Israel organizing anti-Semitic or pressure universities to fire pro-Palestinian professors. Like it or not, eventually not only J Street but also Jewish Voice for Peace will enter the Jewish mainstream. And if Zionists are scared (as I am) of BDS, we can no longer dismiss it as a fringe.

Instead, I think we have to provide a viable alternative to BDS’s basic question: a strong, Zionist, anti-occupation movement of our own. The Conference of Presidents of Major American Jewish Organizations should be begging J Street to join. The Center for Jewish Nonviolence, which recently brought 50 American Jews to do non-violent direct action in the West Bank, should be showered with money by Lynn Schusterman. Instead of pushing students out the door, Hillel should be enthusiastically welcoming Israeli leftist groups like Breaking the Silence.

The answer to accusations of genocide can no longer be to “punish” leftist groups by calling them anti-Semites and by severing ties. That tactic is based on an outdated estimation of BDS’s appeal. If American Jews are going to answer the anti-Zionist left, it can only be by answering their core question: How are we going to end the occupation?

Raphael Magarik is a PhD student, freelance writer, cantor and Talmud teacher living in Berkeley. Follow him on Twitter @RaffiMagarik