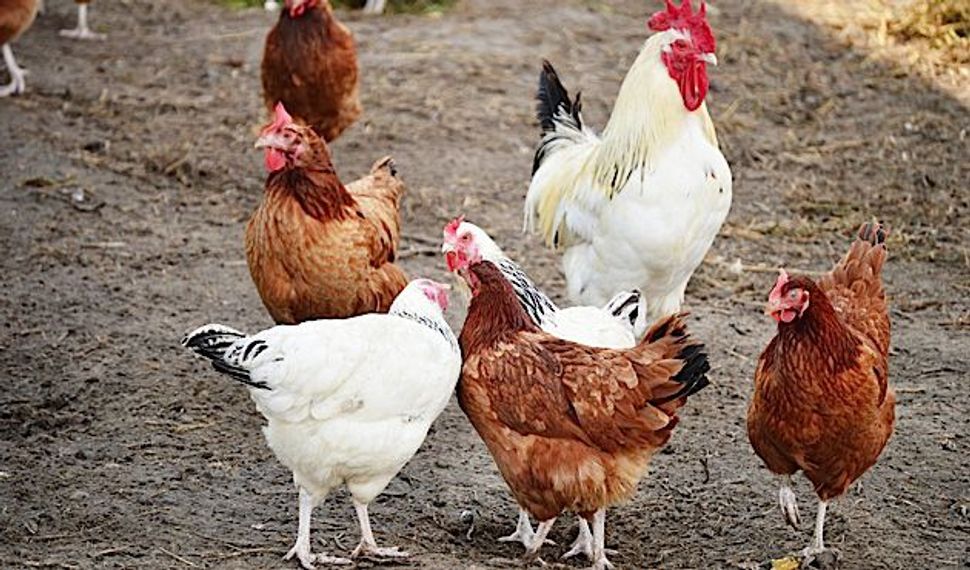 On November 8, all eyes are on the presidential election. To many of us it feels like the most consequential choice, with the starkest consequences, of any in our lifetime. As the CEO of a non-profit, I have no official view on our choice, other than the hope that Americans vote wisely.

But there is a smaller decision on November 8 that will be, in its own way, a significant marker in the evolution of this country, and on this I do have an official view. Voters in Massachusetts will vote on “Question 3,” a ballot initiative that would prohibit the sale of eggs, veal or pork from a farm animal confined in a space too small for it to move.

One of the reasons that Hazon has grown as an organization is that we have been, in a general sense, deeply resistant to banging people over the head and telling them what to do. Environmentalists do it and Jewish leaders do it and too frequently it feels to me both pedagogically ineffective and intellectually arrogant. Shivim panim l’Torah — 70 faces of the Torah — reflects the breadth of our tradition and the caution with which we should apply it to contemporary issues. I’m in favor of a carbon tax not because I’m Jewish but because I’m a human being, alive in the 21st century, and we need to create fiscal mechanisms to inculcate better collective behavior.

But the heart of Jewish tradition is this idea, first pointed out to me by Rabbi Dr. Arthur Waskow (someone who is comfortable banging us all over the head; long may he continue to do so…) that learning leads to action.

And in relation to the industrialized animal industry, the more one learns, the more utterly clear it becomes that so much of what happens, invisibly, behind our food dollars, is morally untenable. There are good reasons that food companies have created ever-stricter prohibitions on bringing cameras or outsiders into their animal processing plants. If we saw what our food dollars paid for, we’d spend our money very differently, immediately.

Hazon began with a bike ride across America, in the summer of 2000, and along the way we stopped in Postville, Iowa, to visit what was then the largest kosher slaughterhouse in America: the Agriprocessors plant that was closed down by federal authorities eight years later. I came away actually impressed by the intention of the slaughterers, but I was utterly appalled at the place overall, its scale, its stench, its fundamental inhumanity both to its workers and to the animals that were killed there. We went in to see a cow and a number of turkeys being slaughtered. Of the five of us who went in, two became vegan, and as far as I know they’re still vegetarian 16 years later.

Yet the death of an animal is but a moment, relative to its life. We will all die: the question is not how we die but how we live. In the liturgy of the High Holidays we think about this in relation to human beings, but it is worth considering in relation to animals, too.

At Adamah, Hazon’s farming program, we have some of the healthiest and happiest chickens you can imagine. Chickens and roosters are rather ugly creatures: the phrase “pecking order” is a metaphor whose power has been lost in our urban lives, but it is not a pretty sight to behold. Yet there is such joy in watching our chickens (most of which are now heritage birds) roam around. They feed on our compost, at night they waddle up into their coop, in the morning they run out or even fly out, and they give us eggs that taste amazing. A rich dark orange yolk, entirely unlike anything one would eat from a supermarket. Kids and adults at our retreats are equally fascinated by them. Our Adamahniks love working with them.

“Regular” eggs, by contrast, come from chickens that have been crossbred in Frankenstinian ways, and who live their whole lives in tiny cages.

And the appalling treatment of industrialized chickens is even worse in the case of calves or pigs, animals that we think of as closer to us in the scale of things. How can we allow our food dollars to cause creatures with complex cognitive and emotional lives to be kept in such severe confinement?

The 20th century industrialization of animal husbandry will be, in the long-run of human civilization, an aberration. We do not need to treat animals inhumanely in order to feed ourselves. Two years ago, on one of Hazon’s Sustainable Israel tours, we visited Harduf, a remarkable kibbutz in the north of Israel. They have a dairy operation explicitly designed to enable large numbers of cows to live healthy cow-like lives. There’s no concrete. Their barns are open on all four sides. Their manure is composted. The food is healthy. They don’t give their cows antibiotics because they don’t need to. And they happily take tour visitors around to see their operation because they have nothing to hide.

So voting yes on Question 3 is important. It is a small step in the right direction. It will have significance in Massachusetts. If passed it will almost certainly lead to similar ballot measures elsewhere. And, critically, it is, in its own way, an act of education. I don’t live in Massachusetts so I can’t vote on Question 3. But I vote every day, in everything that I purchase or don’t purchase. The lives of farmworkers, the wages of those who pick tomatoes, the injuries to those who work in slaughterhouses, the loss of fish stocks, the health consequences of eating over-antibioticized animals: each of these things, and many more, is influenced by our choices every day.

The Jewish year that just ended was the first year in a seven-year cycle of Jewish life that culminates with the shmita year in 2022. During this last year we launched a pilot for our Hazon Seal of Sustainability, creating a pathway for change for Jewish institutions. 24 institutions joined the pilot; over the full seven years of this cycle we hope that several hundred Jewish institutions will participate, so that together we drive significant change across the Jewish world. We’ve partnered with JIFA, the Jewish Initiative For Animals, on those elements of the Seal that relate to the treatment of animals, and both we and JIFA will be happy to provide resources or encouragement for institutions that want to develop an integrated Food Policy in the coming years. And we’ve launched a campaign to encourage communities to switch to cage-free eggs in 5777.

It’s the day after Yom Kippur. If ever there was a day when we ought to begin to be our best selves, this is it. As we start to build our sukkot, and as we move on into the new Jewish year, may we make wise choices — in our food baskets, and in our ballot boxes.

Nigel Savage is the founder and CEO of Hazon. For more info go to hazon.org/seal