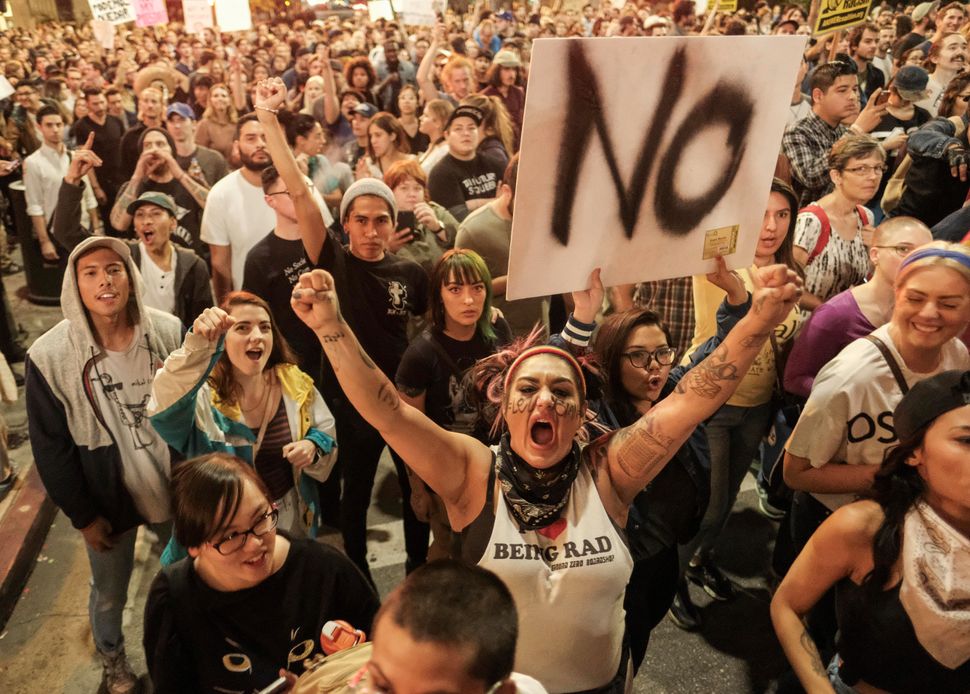 “When they go low, we go high,” said Michelle Obama. Look how well that turned out.

For the next four years, progressives must take a lesson from conservatives: When they go low, we must go lower, fiercer, harder, smarter.

We must fight unrelentingly to save the country (and planet) we once knew. The same zeal, the same ends-justifies-the-means attitude that our opponents have, we must now adopt.

I’m going to start by agreeing with Rush Limbaugh, who made headlines eight years ago when he said he wanted President Obama to fail. We were all outraged, but that became the Republican Party’s policy — indeed, Senate majority leader Mitch McConnell explicitly said so.

And of course, I want Senator Charles Schumer to filibuster everything: the next Supreme Court nominee, the budget slashing taxes for the ultra-rich, the bill to destroy environmental laws, everything. Just like the other side did.

Some in the press have called for us to “better understand” the angry white voters who brought Trump to power. I say, when someone is stepping on your throat, the objective is to defeat him, not understand him.

Mind you, there’s a lot to understand. That the median income of these poor, sad, economically depressed voters is, in fact, $72,000, far higher than that of Clinton supporters. That while they might not be racist themselves, they were certainly willing to put up with abject racism and misogyny in order to get their “outsider” who’s going to “drain the swamp.” (By the way, Trump supporters: Your savior has already sold out, hiring lobbyists for his team and tapping longtime insiders to run his administration.)

Isn’t it funny? When Obama won, I didn’t see a lot of calls for conservatives to “understand” liberals better. No, they pilloried us, lied about us on Fox News, invented bogus scandals to entrap our leaders. Now it’s time for us to do the same — to destroy them, defeat them, stop them from destroying our country.

Sure, I’d like to better “understand” angry, uneducated white men — so that I can defeat them, or manipulate them as skillfully as their charlatan candidate did. To get them off my neck and the necks of people like me. But not so that I can apologize for condescending to them too much, or failing to feel their pain, or whatever.

Stop this handwringing, progressives! Stop bowing your head like a bulrush! The right-wingers are laughing at you. Get in their face! Fight fire with fire. Use your white privilege, if you’re white, to call out racism. Don’t be a “good German” who lets the likes of Steve Bannon, a man who was content to let white nationalists spew hate on his site, run the White House. Personally, I will not be the Neville Chamberlain of the next four years.

This is what my Jewish tradition teaches me: not to be silent, or cowed, or introspective, or apologetic in the face of injustice. The Book of Proverbs says, “Whoever sows injustice will reap calamity, and the rod of his fury will fail” — hardly compromising words. The prophet Jeremiah shouts, “Woe to him who builds his house by unrighteousness, and his upper rooms by injustice, who makes his neighbor serve him for nothing and does not give him his wages.” Woe to him — not well, let’s try to understand him better.

And when have we succeeded by kowtowing to anti-Semites or demagogues who allow anti-Semitism to persist? Isn’t the point of the State of Israel that now we can punch back when they punch us? Isn’t this what Alan Dershowitz talked about in “Chutzpah,” that bestseller of his that told American Jews not to sha shtil but to stand up, make noise and fight back?

There’s a lot of talk about not “normalizing” Trump. Wake up, people: This is the new normal. We are the abnormal: not just progressives, but true conservatives and moderates as well, people who believe in rational discourse, in civility, in science. Defense hawks (pro-Israel and otherwise) who believe that America must lead, not cower. Defense doves who believe that violence should be the last resort, not the first choice. We are all the marginal; the know-nothings are the normal.

And that means no more acting like goody two-shoes. No more wasting energy on stupid protests or gestural, romantic politics that don’t accomplish anything. Let’s condemn anyone on our side who uses violence or resorts to violent imagery. But short of that, absolutely everything is fair game. Let’s expose just what the Russians did during the campaign. Let’s expose the traitorous snake, FBI director James Comey. Let’s out the closeted Republicans, complicit in our oppression. Let’s tell the stories of how neo-Nazis and Breitbart.com work together.

And finally, one more Jewish lesson: Let’s do it out of love.

It’s easy to focus on hatred, since, if I am honest with myself, I do indeed hate the people who will be rolling back environmental laws, civil liberties and my own civil rights. It’s also easy to mistakenly focus on the “near enemy” — like the Jill Stein voters who cost Hillary Clinton the state of Wisconsin — rather than the “far enemy” who really bears responsibility.

But my tradition teaches that a conflict can be “for the sake of heaven” or “not for the sake of heaven.” I can fight the same battle either for the good of my country and my planet, or out of malice toward those who cheated their way to this victory. But the latter will not endure. It will lead to both political defeat and personal burnout.

So, I resolve that each day when I set out to do my political work, I will pause to remember why I am doing it: the forests that will soon be destroyed, the neighbors who will soon be interrogated and deported, the vulnerable who will soon have no healthcare, no social safety net, no voice in our government.

When I turn my thoughts to them, I feel love and compassion, not hatred. My anger shifts from petulant rage to a kind of steely resolve to utterly defeat and devastate those forces now arrayed against us. Because I am fighting not out of hatred, but out of love for the most vulnerable people and creatures on the planet. I am fighting with long-term determination, not short-term rage that burns bright and then burns out.

We are going to lose many battles in the coming four years. But we will win this war against ignorance and greed, if we fight it with all we’ve got.