Jared and Ivanka, Separate Business From Politics Before You Become Walking Anti-Semitic Tropes 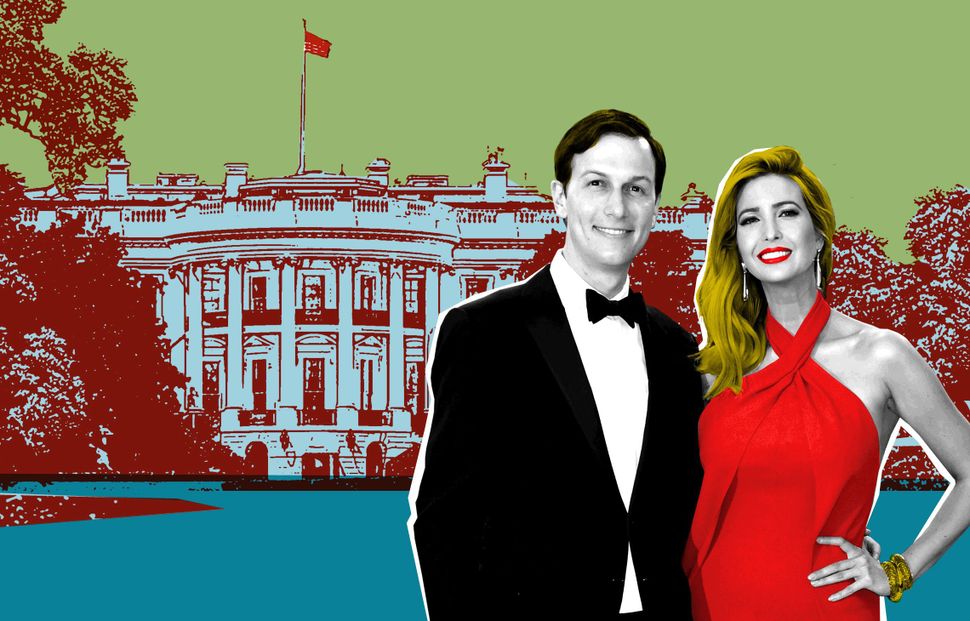 Please excuse the informality of my greeting. Your celebrity has become so ubiquitous that first names are all that’s needed. You are, right now, the most powerful Jews in America, and I trust you recognize the significance of your position seriously enough to listen to my plea.

Because I’m worried. The anti-Semitism unleashed during the presidential campaign is demonstrably more prevalent than anything I’ve experienced in my lifetime, and I’m closer to your father’s age than I am to yours. You must feel it, too — you must be aware of the shiver it is sending through our community, the fresh uncertainty, the way more people are crowding into the pews on Shabbat, looking for comfort and solidarity. You live a far more rarified life than I do, our annual incomes separated by many, many zeroes, but I’m sure you care about the future of your three Jewish children as fervently as I care about the future of mine.

So please don’t make it worse.

This isn’t a question of policy or politics; I’m not here to lobby you on reproductive rights or gun control or the U.S. relationship to Israel. We can agree to disagree on all manner of issues. But what I hope we can agree on is the absolute necessity for you to represent the concerns of American Jews to the person who will soon be president, and to recognize that everything you do can make our situation more secure, or more precarious.

The nasty associations of Jews with money and power, the insinuation that we are a people who thrive on getting rich off of others and seek political influence to shore up our own wealth, are resurfacing on the fringe of American discourse and pushing their way into the mainstream. We saw that in the anti-Semitic tweet your father’s campaign posted last summer, tying together a Jewish star, gobs of cash and “corrupt” Hillary Clinton. We saw that in the final ad of the Trump campaign just before Election Day, which evoked centuries-old anti-Semitic tropes implying Jews maintained an insidious control of the global economy.

We see that in the appointment of Stephen Bannon as a senior strategic aide to president-elect Trump — an appointment, Jared, that you evidently delayed announcing until the end of Shabbat. Did you really think that waiting until sundown would obviate the sin of elevating someone who has published anti-Semitic, anti-immigrant, anti-Muslim, anti-feminist writing on Breitbart News?

Bad enough, Ivanka, that you used your speech at the Republican National Convention and your appearance with your father on national television to hawk your own wares. I assume that by now you’ve recognized the danger in treating civic duties as marketing opportunities.

Far more serious and consequential is the fact that the Trump family is resisting disentangling its far-flung business empire from the reigns of political power once Donald Trump is inaugurated in January. This is not just a concern of sour-grapes liberals — no less than the Wall Street Journal stated bluntly: “Mr. Trump’s best option is to liquidate his stake in the company.”

It should be obvious to you two why this is essential to the proper functioning of American democracy, to the potential success of the Trump administration — and to counteract the inevitable accusations that Jewish monied interests control the strings of the most powerful office in the world.

The president-elect has said that he intends to give control of the Trump Organization and the more than 500 limited liability companies through which he owns his assets to you, Ivanka, and your brothers Donald Jr. and Eric. But he will still be associated with his businesses, because you — his family — are hardly independent from him. Even if as president your father does not directly manage his businesses, he’ll continue to own them, and you and your brothers will be involved in real estate deals and naming rights and other activities across the globe.

Everything you do will be subject to scrutiny. As the New York Times noted about your father: “The conflicts between his private interests and his public role will be impossible to untangle.”

And that will inevitably give rise to grave political consequences, opening up your father’s administration to very real charges of corruption and inside dealing, of using government to enhance a private interest — of doing everything he accused Hillary Clinton of doing, but this time, there will be a lot more proof. Remember, presidents can face litigation in private matters. If you think everyone from the New York State Attorney General to defrauded Trump University students were willing to sue your father when he was just another rich guy, imagine how huge a target he will be in the White House.

Layer on top of these manifest potential conflicts the prospect of your own political entanglements — the hints that Jared is figuring out how to skirt federal anti-nepotism rules to become an official advisor to the president, or the suggestions that Ivanka will effectively act as First Lady as her step-mother stays home in Manhattan or Miami — and the situation becomes even messier.

Given the ability that a few anti-Semitic trolls have to infiltrate and denigrate public discourse, it may only be a matter of time before they turn on you. I say this with no predictive knowledge, or any pleasure, but because I already see such sentiment bubbling up on decrying “Trump’s associations with Jews.” If the new president doesn’t fulfill all of his outlandish promises, if he doesn’t build that wall and deport millions and cancel foreign deals and so on, some of his supporters will look to assign blame. And some of his supporters were folks like the Ku Klux Klan, which endorsed him. Might they think the worst of powerful Jews like yourself? Why, yes they might.

Anti-Semitism is not the fault of the victim, and Jews shouldn’t be held accountable for awful things that other people say and do about us. But in those rare instances when we hold positions of great power, we should be mindful of the responsibility that entails and do our best not to provoke anti-Semitism or any other sort of ugly behavior.

Jared and Ivanka, you have an extraordinary opportunity to do what is right for America and what is right for American Jews. If you insist that the new president forcefully and repeatedly denounce the anti-Semitism evoked in his name, and if you persuade him to truly separate his business interests from his elected office — which he long ago pledged to do — then you will have helped him run a cleaner, more respectable and more tolerant government. And you will help your own people in the process.

Jared and Ivanka, Separate Business From Politics Before You Become Walking Anti-Semitic Tropes