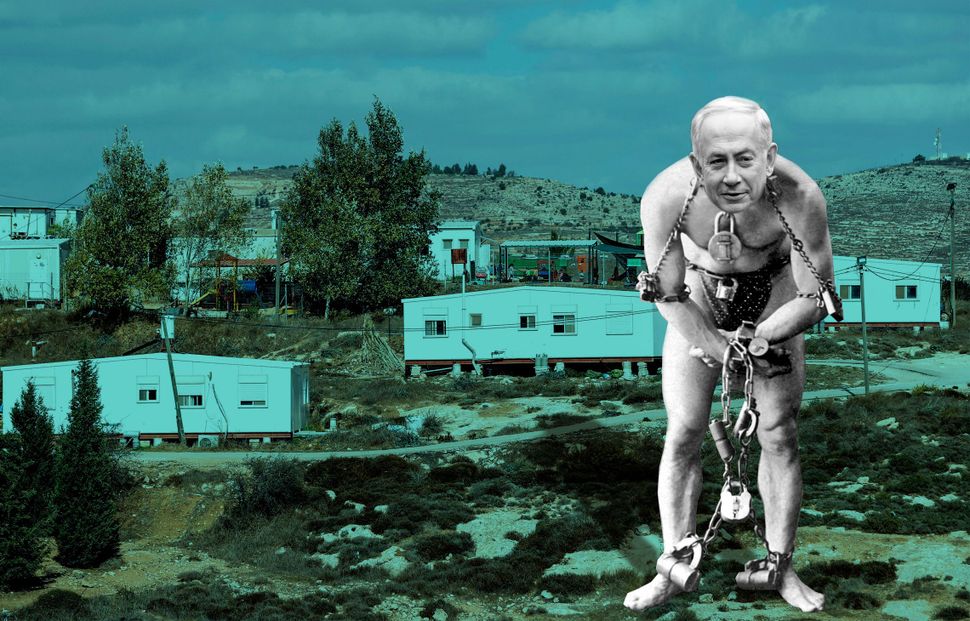 October 31 marked 90 years since the death of Harry Houdini, the rabbi’s son who became the world’s most famous magician. Houdini dazzled audiences around the globe by conjuring up unforgettable performance art out of the most essential practice in Jewish tradition: escaping danger.

It’s appropriate, then, that in the month since Houdini’s yahrzeit we’ve witnessed the performance of a lifetime by the other great Jewish escape artist of our era. I refer, of course, to Benjamin Netanyahu.

Granted, their methods differ. Houdini would have himself handcuffed, shackled, nailed into a wooden coffin with lead weights and lowered into a river, only to emerge unscathed minutes later. The prime minister of Israel doesn’t work with handcuffs or lead weights. His performances are less dramatic, but vastly more complex and consequential. Still, the basic principle is the same: Put yourself in a deadly trap. Get everyone predicting your demise. Miraculously escape at the last minute. Repeat.

Netanyahu’s dangers usually come one at a time. This time he’s caught up in a tangle of intertwined crises that can’t be disentangled: Unruly coalition partners threaten to bolt the government. The international community grows restive. The American administration thinks it knows the prime minister’s job better than he does. A parade of journalists and police investigators sniffs around Netanyahu, his family and associates, chasing down rumors of corruption. Most troublesome, the settler movement and the Supreme Court speed toward a head-on collision.

Of these challenges, the most serious is the escalating clash between the settler movement and the Supreme Court. It poses the greatest threat to Netanyahu’s government, and to the state itself. The court gave the government a December 25 deadline to demolish a West Bank settlement built illegally — violating Israeli law, that is — on privately owned Palestinian land. The settlement, Amona, was established in 1995 by youth from established settlements, without government authorization. Peace Now and other organizations brought lawsuits, arguing that Amona was on private property. In 2004 the court agreed and ordered Amona dismantled. The government asked for an extension, hoping to move the settlers peacefully.

In 2006 the army and police moved in to evacuate. The result was a violent clash between some 10,000 troops and about 4,000 militant settler youth and yeshiva students, leaving 300 injured. Amona was evacuated, but the settlers returned within the year. Since then, the government has received one postponement after another. Finally, in December 2014, the justices gave the government two years to evacuate. Netanyahu has tried to negotiate a deal to have Amona rebuilt on nearby public land. The settlers refuse to budge.

In a last-ditch effort, the settler-backed Jewish Home party, Netanyahu’s chief coalition partner, introduced a bill this year to “regularize” — essentially to legalize — the status of Amona and about 50 similar wildcat settlement outposts built on privately owned Palestinian land. The bill aims to cut the Supreme Court out of the debate by declaring that outposts that received any government assistance, such as mail delivery, roads, or water and power delivery, had implicit government authorization and weren’t illegal. That covers nearly all outposts.

Last July, state attorney general Avichai Mandelblit, a Netanyahu protégé, ruled the bill unconstitutional under Israeli jurisprudence, and as a violation of international law. The bill was forwarded to the Cabinet regardless.

In November, the full Cabinet took up the bill. Netanyahu argued against it. He warned that senior Israeli officials, himself included, could be hauled before the International Criminal Court on war crimes charges. Most nations consider it a violation of the Geneva Conventions for an occupying power to move its civilians into foreign territory it seized in war. Israel interprets the Geneva Conventions differently, arguing that the language there isn’t applicable to the West Bank. But Israel has avoided international sanctions because it has defined its own legal interpretation clearly and adhered to it. The new bill would violate Israel’s own laws, possibly triggering international action.

Netanyahu is said to have an additional worry: In the final weeks of Obama’s presidency, the bill could anger Obama and push him into making one final gesture toward Israeli-Palestinian peace. Jerusalem fears that Obama might allow a United Nations Security Council resolution to define the terms of a final peace agreement. That would ratify in enforceable international law a host of provisions that Netanyahu wants to leave open, including borders, Jerusalem and the rehabilitation of refugees.

On the other hand, if the bill fails and Jewish Home quits the Cabinet, the government will fall and Netanyahu will probably have to call early elections. He will no longer control events.

And this wasn’t even the whole story. At the end of November, Finance Minister Moshe Kahlon, a Likud defector who heads his own centrist Kulanu party, called the bill anti-democratic and unconstitutional, and said he’d leave the coalition if it passes. At that point, Netanyahu was trapped.

The result was a last-minute compromise. The bill legalizes outposts built on private Palestinian land if they’ve received government assistance and haven’t received a Supreme Court order for people to evacuate. Thus the bill now respects the status of the court and still protects the outposts — all except the one it was intended to save, Amona.

The compromise placated Kahlon, who’ll stay in the coalition, as well as the Jewish Home leader, Naftali Bennett, who’ll work with Netanyahu to seek a separate solution for Amona. Who isn’t happy? The settlers. They say Bennett sold them out. Some are calling for his head. The attorney general isn’t pleased either; he says the bill is still unconstitutional.

There’s a school arguing that the entire outposts debate doesn’t really matter. Polls have long shown that Netanyahu has no real rival on the horizon. There’s no leader around with the sort of public trust and respect that Netanyahu enjoys.

That is, there wasn’t until December 1. That’s when Israel’s Channel 2 television station released a new poll showing that if elections were held today, Netanyahu would tie with former television journalist Yair Lapid of the center-left Yesh Atid party. More important, the breakdown of the other parties in the poll shows for the first time in years a configuration that might let Lapid form a peace-leaning coalition without Netanyahu. It’s a long shot, but it’s possible.

Houdini’s luck ran out when he was 52. One of his stunts — his boast that his stomach muscles could withstand any blow — didn’t work, and he died of a ruptured appendix. That’s the thing about escape artists: They make everything look easy, until one day it isn’t and they get themselves into a mess they can’t escape.