Why I Hate Chrismukkah and So Should You 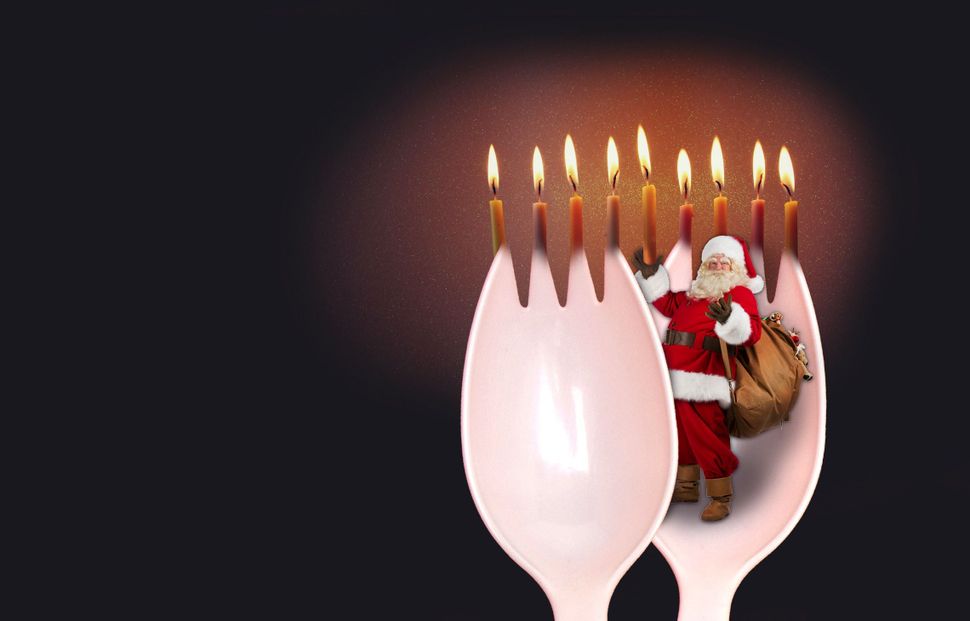 East Asian civilizations identify themselves through their use of chopsticks, European ones have universally adopted the knife and fork, but not one significant civilization has ever embraced the spork.

The reason that this highly practical spoon-shaped eating utensil with short tines at the tip has not become a favorite is because it’s a compromise. Neither here nor there. It’s indecisive. It takes good parts of both fork and spoon and ends up as satisfying as neither.

There’s a problem of categorization, too. Christians celebrate Christmas and Jews celebrate Hanukkah. So what should we call the people who celebrate both? I suggest “greedy.”

I mean really, what other reason is there for someone (and let’s face it, those someones are Jews) to celebrate Chrismukkah apart from seeing that on top of eight nights of delicious doughnuts, latkes and presents there is also a festive bush and another set of presents to grab? Entitled much?

“Oh, Mommy, Mommy, everyone else has got a Rolex for Chrismukkah, why can’t I?” Grow up, Jews.

But, I hear you say, what if you belong to an interfaith family? Celebrating Christmas (God bless you) and Hanukkah (bevakashah) this year, when the calendar so completely coincides, can seem from the outside as if you are indulging in some Chrismukkah. And even from the inside, confusion may ensue. For those folk — for whom Chrismukkah is as much a curse as a blessing (they get one festival for the price of two) — I’d suggest using a version of the kosher rule. That is, keep the two festivals in separate rooms, and wait three hours after eating latkes before decorating your tree.

The ultimate symbol of Chrismukkah is the Hanukkah bush. Its absurdity becomes obvious if we invert it as if there were a festival called Hanukmas, for which the symbol would be a hanukiah with a picture of Jesus Christ on it. Or perhaps it’s clearer for you if we thought about other combination festivals that we might have: Pur-Easter for example, with its delightful My-Lord-Is-Risen-From-the-Dead Purim bunny.

Even the portmanteau name itself is weird. Whose idea was it to take the title of the Christian Lord from one festival and the strange declension suffix from the other festival? By that logic, the snack food for Chrismukkah should be SchmaBacon. It sounds like something from the Jabberwocky. In fact here’s my Chrismukkah Jabberwocky.

Frank Costanza from “Seinfeld” had the right idea, as, in a more serious way, did Maulana Karenga — the inventor of Kwanzaa. If you don’t like what’s on offer, invent your own festival. I like my own festivals — well, I like hating them — but I defend to the death your right to celebrate Festivus with the rest of us.

But let’s not smush two discrete traditions into one lumpy mess. It doesn’t work, and it makes us all look bad. So thanks for the invitation, but don’t expect me to come over and eat your latkes and SchmaBacon.

Why I Hate Chrismukkah and So Should You