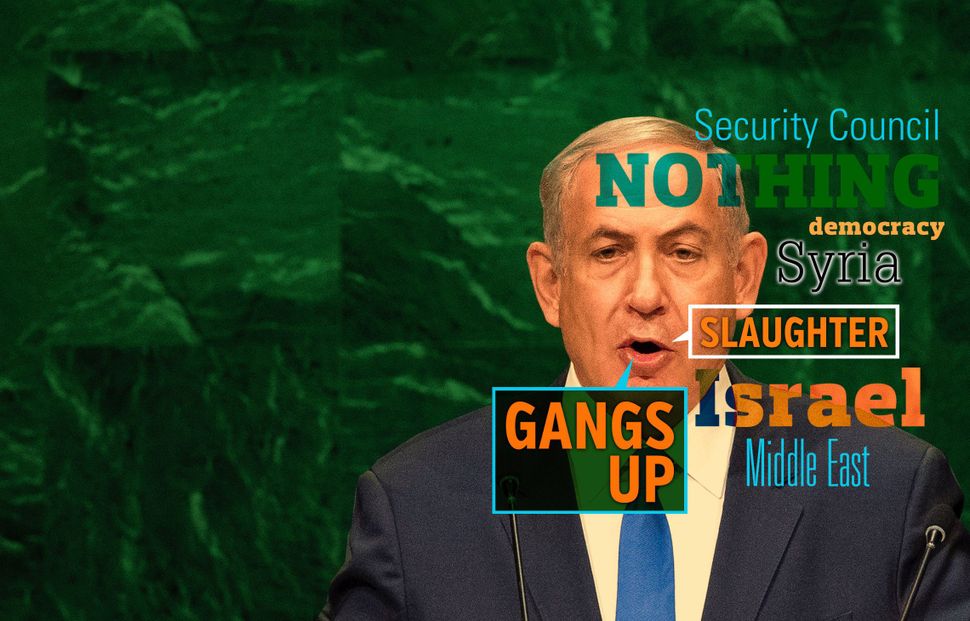 In both responses, the Israeli leader illustrated George Orwell’s famous insight: The abuse of human beings starts with the abuse of language.

“At a time when the Security Council does nothing to stop the slaughter of half a million people in Syria,” Netanyahu declared after the UN vote, “it disgracefully gangs up on the one true democracy in the Middle East, Israel.”

The first clause is a non-sequitur. Yes, Syrians in Aleppo and elsewhere are suffering more than Palestinians in the West Bank. Yes, the UN should be doing more to relieve their plight. But the test of whether Israeli settlement policy deserves international condemnation is whether Israeli settlement policy is morally wrong, not whether other governments deserve condemnation more.

By Netanyahu’s logic, the UN shouldn’t condemn Bashar al Assad’s crimes either. After all, only 500,000 people have died in Syria’s civil war; ten times that many have died from violence in Congo. So unless the UN criticizes Congo’s leaders ten times as often, Assad can claim to be the victim of a double standard, too.

Netanyahu’s logic would also have ensnared the American Jewish organizations that in the 1970s protested the Soviet Union’s refusal to let Jews emigrate. After all, the Khmer Rouge in Cambodia and Idi Amin in Uganda were committing far worse human rights abuses at the same time. Why didn’t Jewish groups focus on those?

When it comes to Syria, there’s reason to doubt Netanyahu’s sincerity. Just days after denouncing the UN for its inaction there, he reportedly instructed Israeli diplomats to skip a vote on creating a UN commission to gather evidence of Syrian war crimes because he feared alienating Vladimir Putin. But regardless, the UN’s action or inaction on Syria doesn’t excuse Israeli settlement policy. A lesser evil is still evil.

If the first half of Netanyahu’s sentence is irrelevant, the second half is untrue.

In the West Bank, Israel is not the “one true democracy in the Middle East.” It’s not a democracy at all. It’s not a democracy because Palestinians — who comprise the vast majority of the West Bank’s inhabitants — cannot vote for the government that controls their lives: the government of Israel. (Yes, Israel subcontracts certain governing functions to the Palestinian Authority, but it still controls the entire area. Israel’s army — and the army of no other nation — can enter any square inch of the West Bank anytime it wants and arrest anybody it wants, including members of the Palestinian Authority itself). If Israel really were a democracy in the West Bank, and millions of West Bank Palestinians could vote in Israeli elections, Netanyahu wouldn’t be Israel’s prime minister.

Five days later, after Kerry gave a speech defending the Obama administration’s decision to let the UN resolution pass, Netanyahu tried a different tack. Settlements aren’t the problem, he insisted, the Palestinians are.

“This conflict is not about houses, or communities in the West Bank, Judea and Samaria, the Gaza district or anywhere else,” Netanyahu declared. “This conflict is and has always been about Israel’s very right to exist…The persistent Palestinian refusal to recognize a Jewish state remains the core of the conflict.”

But that’s a false dichotomy. Yes, the refusal of some Palestinians to recognize Israel stands at “the core of the conflict.” So do settlements, in part because they encourage the very Palestinian rejectionism that Netanyahu decries.

Palestinian politics is neither monolithic nor unchanging. In the early twentieth century, Palestinian leaders fought to prevent the establishment of a Jewish state. In the mid-twentieth century, they fought to undo it. Then, gradually, dissident Palestinian thinkers began arguing for a change of strategy. Although they deeply regretted Israel’s creation, they accepted that it was now irreversible. Palestinians, they argued, should recognize Israel in hopes of winning their own state alongside it in the West Bank and Gaza Strip. This shift in Palestinian strategy culminated in the PLO’s declaration, at the start of the Oslo Accords in 1993, that it “recognizes the right of the State of Israel to exist in peace and security.” (The Palestinian National Council ratified that declaration by amending the PLO’s charter in 1998.)

Hamas, and even some in the PLO itself, disagreed. And when it comes to recognizing Israel, Palestinians have been divided ever since. Observers can debate where the balance of Palestinian opinion lies. But the key point is this: settlements undermine the Palestinians most willing to accept Israel’s right to exist.

Listen to Salam Fayyad, a Palestinian leader that even Ron Dermer, Netanyahu’s ambassador to the United States, has praised for his commitment to peace. Before stepping down as the Palestinian Authority’s prime minister in 2013, Fayyad told The New York Times’ Roger Cohen that, “The occupation regime is more entrenched, with no sign it is beginning to relinquish its grip on our life. There are more settlements, more settler violence, more intrusiveness into all aspects of Palestinian life.” As a result, Fayyad declared, “I represent the address for failure. Our people question whether the P.A. can deliver. Meanwhile, Hamas gains recognition and is strengthened.”

At the Camp David talks in the summer of 2000, Barak proposed annexing nine percent of the West Bank. For their part, the Palestinians proposed that Israel annex only 2.5 percent. Why the discrepancy? Because Barak wanted to incorporate 80 percent of Jewish settlers into Israel while the Palestinians felt that such a large annexation would imperil their state’s territorial contiguity.

Eight years later, the two sides disagreed again. Olmert proposed that Israel annex 6.5 percent of the West Bank; the Palestinians said they could accept an annexation of no more than 1.9 percent. As Bernard Avishai has reported, one of the biggest sticking points was Ariel, Israel’s fourth largest settlement, which the Palestinians insisted Israel dismantle because it juts deep into the northern West Bank.

Obviously, Israeli and Palestinian negotiators clashed over other issues too: Jerusalem, refugees, the Jordan Valley. But in both negotiations, the settlements clearly made reaching a deal harder. Believing that dismantling large settlements like Ariel was politically impossible, Barak and Olmert insisted on annexing sizable chunks of the West Bank. Believing those annexations would make their state non-viable, the Palestinians refused.

Today, because the settler population is larger, those gaps would be even wider. It’s academic because unlike Barak or Olmert, Netanyahu has never offered a map of the kind of Palestinian state he could accept. What he offers instead is rhetoric: cutesy Americanisms like “Friends don’t take friends to the Security Council.”

But there are realities that public relations-lingo can’t obscure. By creating one law for Jewish settlers, who enjoy Israeli citizenship, free movement, due process and the right to vote for the government that controls their lives, and another for Palestinians, who live as non-citizens under military law, Israel in the West Bank has become a “brutal occupation force” that is “making the lives of millions unbearable.” Those words come from Avraham Shalom and Carmi Gillon, two former heads of the Shin Bet.

Their English isn’t as polished as Netanyahu’s. But as Orwell taught long ago, you don’t need fancy language when you’re speaking the truth.

Peter Beinart is senior columnist and contributing editor of the Forward.