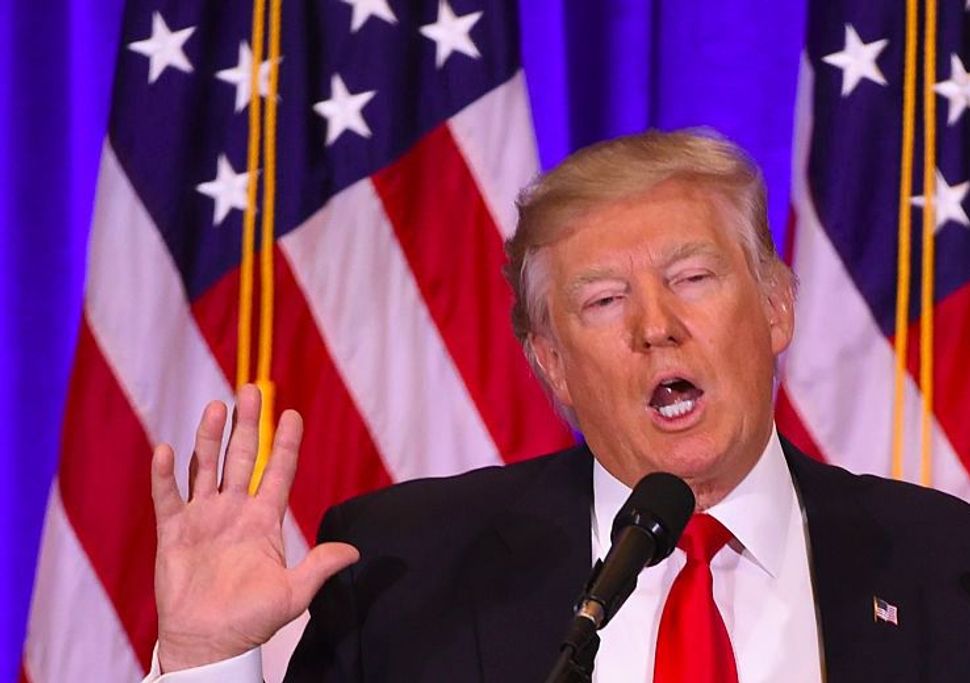 In the decades to come, historians of American Jewry will ask how a community that keenly remembers its own experience with state bigotry produced institutions that excused the most nakedly bigoted major party presidential nominee in modern American history.

They will ask why the crowd at the policy conference of the American Israel Public Affairs Committee gave Donald Trump a standing ovation just three months after he proposed banning Muslim immigration to the United States. They will ask why the Conference of Presidents of Major American Jewish Organizations criticized neither that ban nor Trump’s racist attack on a Mexican-American judge.

And they will reserve a special mention for the Simon Wiesenthal Center’s Rabbi Marvin Hier. Despite running what is ostensibly a human rights organization, Hier ignored or downplayed Trump’s attacks on vulnerable minorities throughout the campaign.

And last week, Trump rewarded him by asking him to offer an inaugural prayer.

To grasp how dramatically the Wiesenthal Center failed the moral test that Trump posed, compare its behavior over the past 18 months to that of the Anti-Defamation League. In their respective stated missions, the two organizations are similar. The ADL “fights anti-Semitism and all forms of bigotry, defends democratic ideals and protects civil rights for all.” The Wiesenthal Center “confronts anti-Semitism, hate and terrorism, promotes human rights and dignity, stands with Israel, defends the safety of Jews worldwide, and teaches the lessons of the Holocaust for future generations.”

But when it comes to Trump, the two organizations have interpreted those missions in very different ways. In December 2015, when Trump proposed a religious test for immigration to the United States, the ADL called it “unacceptable and antithetical to American values.” And it drew a parallel between the persecution of Jews and of Muslims, noting “In the Jewish community, we know all too well what can happen when a particular religious group is singled out for stereotyping and scapegoating.” The Wiesenthal Center criticized the ban. too, but in quite different terms. “Lumping all Muslims in the crosshairs of the Terrorism crisis only hurts the legitimate campaign against Islamist Fundamentalism and demeans law abiding American citizens,” Hier and his deputy, Rabbi Abraham Cooper, declared. “Such a policy would only serve to strengthen Islamic State group

In March, Hier told the New York Jewish Week, : “If I were an adviser to the Trump campaign, I would tell him to immediately go before the cameras and repudiate David Duke, Farrakhan and Le Pen. When the anti-Semites are circling the wagons, if I were Trump I would say I don’t need their support and don’t want it.”

But when Trump became the Republican nominee, the Wiesenthal Center fell conspicuously silent. Last July, when Trump retweeted a Jewish star surrounded by dollar signs, the ADL’s national director and CEO, Jonathan Greenblatt, said, “It is outrageous to think that the candidate is sourcing material from some of the worst elements in our society.” The Wiesenthal Center said nothing.

When the Trump campaign, in its closing ad, featured three prominent Jews — George Soros, Lloyd Blankfein and Janet Yellen — alongside images of dollar bills and menacing language about “global special interests,” the ADL warned that “the images and rhetoric in this ad touch on subjects that anti-Semites have used for ages.” The Wiesenthal Center again said nothing.

When Trump won the election, American Jewry’s two largest anti-discrimination groups again reacted in strikingly different ways. In a clear reference to Trump’s attacks on Muslims, Mexican immigrants, journalists and others, the ADL noted, “Democracy encompasses the full collection of our laws, our norms and institutions that enshrine and protect our freedoms… America remains a land of economic opportunity and personal freedom for all people regardless of their gender, race, class, faith, ethnicity, sexual orientation or political preference.” The Wiesenthal Center, by contrast, congratulated Trump for supporting Israel, and “commended The implication was that, from a human rights perspective, Trump’s victory offered nothing to worry about.

The contrast continued when Trump chose former Breitbart executive chair Steve Bannon as his senior adviser. The ADL opposed the appointment, noting, “It is a sad day when a man who presided over the premier website of the ‘alt-right’ — a loose-knit group of white nationalists and unabashed anti-Semites and racists — is slated to be a senior staff member in the ‘people’s house.’” Hier, by contrast, remarked: “It’s definitely a controversial appointment. We’ll have to wait and see.” But given that “the president’s daughter converted to Orthodox Judaism,” he noted, “I do not believe that [Bannon’s] going to be, you know — can’t wait until I get to my office so I can spout some more anti-Semitism.”

In an interview, Cooper told me that he had been influenced by meeting Breitbart’s Jewish editor, Joel Pollak, who vigorously defended Bannon against anti-Semitism charges. What Cooper couldn’t adequately explain was why the Wiesenthal Center overlooked Breitbart’s far more blatant Islamophobia, as expressed in headlines like “Man Bites Dog: Muslim Is Nice to Non-Muslim”

During an almost hour-long conversation, I found Cooper both charming and utterly sincere in his belief that he and Hier are fulfilling the Wiesenthal Center’s mandate to defend human rights. Unfortunately, I think the evidence suggests the opposite. Scott Goldstein, who once developed exhibits for the Wiesenthal Center’s Museum of Tolerance, came closer to the truth this past spring when he denounced “the silence of the Simon Wiesenthal Center in the face of the bigotry and intolerance sweeping our nation.”

What explains that silence? Some have pointed to donations from the Kushner family. And to the fact that the chairman of the Wiesenthal Center’s board of directors, Larry Mizel raised money for Trump during the campaign.

But in a deeper sense, these affiliations are not the cause of the Wiesenthal Center’s moral failure — they are its product. The only reason the Wiesenthal Center attracted the support of Mizel and the Kushner family is that, for years, it has refused to defend the human rights of millions of West Bank Palestinians who lack basic rights under Israeli control. It’s hardly surprising that a rabbi who builds a “Museum of Tolerance” on the site of a Muslim cemetery in Jerusalem is less than vigilant about the rights of Muslims in the United States.

Hier didn’t start overlooking bigotry when Trump launched his presidential campaign; he and his organization have been doing so for a long time.

“Injustice anywhere,” Martin Luther King Jr. famously said, “is a threat to justice everywhere.” On Friday, January 20, when Hier prays to God on Donald Trump’s behalf, he will teach us that lesson anew.

Peter Beinart is senior columnist and contributing editor at the Forward.