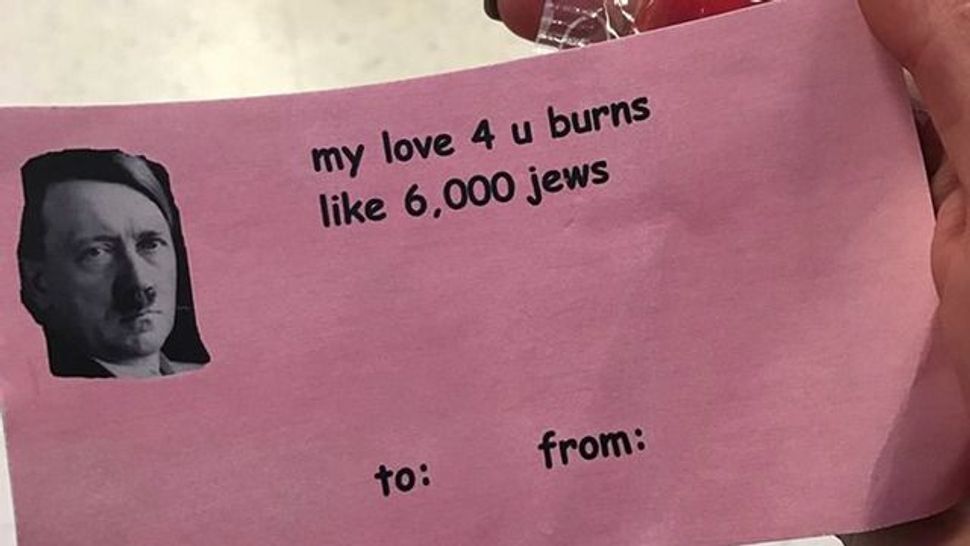 1) Republicans Keep On Omitting Jews from the Holocaust.

On Tuesday, Feb. 7th Republicans blocked a resolution declaring that Jews were the primary victims of the Holocaust. The resolution, which House Democratic Caucus Chairman Joe Crowley introduced, was a clear attempt to either pin down Republicans (or to give space to the GOP to rectify their position) on the controversial statement made by Trump’s White House on Holocaust Memorial Day, which pointedly failed to mention Jews at all. Crowley’s resolution called for the House to confirm “the indisputable fact that the Nazi regime targeted the Jewish people in its perpetration of the Holocaust” and to condemn Holocaust denial. On Wednesday, the Anne Frank Center for Mutual Respect responded by calling out both the initial White House statement and the refusal of House Republicans to condemn it as acts of anti-Semitism.

During a meeting with a delegation from the ADL (Anti-Defamation League) on Feb 9th, Pope Francis announced a deep and unwavering condemnation of anti-Semitism. “Sadly, anti-Semitism, which I again denounce in all its forms as completely contrary to Christian principles and every vision worthy of the human person, is still widespread today,” the Pope said. “The Church feels particularly obliged to do all that is possible with our Jewish friends to repel anti-Semitic tendencies.” This meeting and announcement took place on the 50th anniversary of the Nostra Aetate, an important declaration on Catholic-Jewish relations that was announced in 1965.

3) Widespread anti-Semitism was reported in a middle school in Colorado.

This week, CBS4 in Denver, Colorado discovered and reported that the U.S. Department of Education Office for Civil Rights is investigating complaints of anti-Semitism made by both a student and a teacher at West Jefferson Middle School in Conifer, Colorado. The teacher issued their statement in a letter to the school’s principal in December, detailing the anti-Semitic atmosphere, and stating that “several Jewish students have been abused and intimidated.” The student, eighth grader Isabelle Grunspan, told the school board in January that she has to deal “constantly” with anti-Semitism, complaining of students saying that “Hitler was a genius” and other anti-Semitic remarks, of swastikas being painted on school and student property, and of being “illegally targeted by the administration and teachers.” The district has since taken some disciplinary measures and instituted social sensitivity problems, but the investigation by the Education Office is ongoing.

Echoing the recent incident with GOP lawmaker Steve Chabot, former Labour parliamentary candidate and councillor John Clarke was also caught re-Tweeting an anti-Semitic meme this week. Clarke shared a tweet from Twitter user Tinnelle88, who regularly spreads far-right hate speech and espouses White Nationalism. The tweet in question contains slurs against Israel and the Rothschild family, and suggests that Israel controls both houses in the US House of Representatives, and that both Israel and the Rothschilds have taken over the world. Clarke, who sits on Black Notley Parish Council in Sussex, denies all allegations of anti-Semitism, stating that he did not realize the meme was created by an anti-Semite, but has neither apologized for the content of the Tweet, nor has he deleted it. The incident has re-ignited recent controversy over anti-Semitism within the Labour party.

Pinchas Goldshmidt, one of Moscow’s top Rabbis, has condemned the “total silence” from Russia’s parliament after its Deputy Speaker, Pyotr Tolstoy, made anti-Semitic remarks in January. Tolstoy (who is also the great-great grandson of famed Russian author Leo Tolstoy), when commenting on protests against the planned transfer of ownership of Russia’s St. Issac Cathedral from the state to the Orthodox Church, stated that the protestors were working to continue the work of their ancestors who had “destroyed our cathedrals after jumping over from the Pale of Settlement with revolvers in 1917” — accusing Jews (who the Pale of Settlement indicates) for that destruction. Jewish leaders in Russia, including Alexandr Boroda, head of the Jewish Communities Federation of Russia, have spoken out against the statement and the anti-Semitic myths it helps to perpetuate, and have called on parliament to have an “appropriate reaction”. Tolstoy has denied the accusation, and has met with Boroda specifically to tell him that he had not intended to make an anti-Semitic slur.

At a Valentines’ Party thrown by the College Republicans of Central Michigan University, an anti-Semitic card was placed in one student’s Valentines goody bag. The card featured Adolph Hitler, and read, “my love 4 u burns like 6,000 Jews.” The CMU College Republicans released a statement on their Facebook page said that the card was placed in the bag “without other members’ knowledge”, and that the club didn’t distribute the card and does not condone anti-Semitism. The University’s president, George E. Ross, said both that he was deeply disappointed but also that the card was protected under the First Amendment. Cenrtal Michigan University’s Hillel and Central Michigan Action (another campus activist club) organized a march on February 9th to protest hate speech on campus.