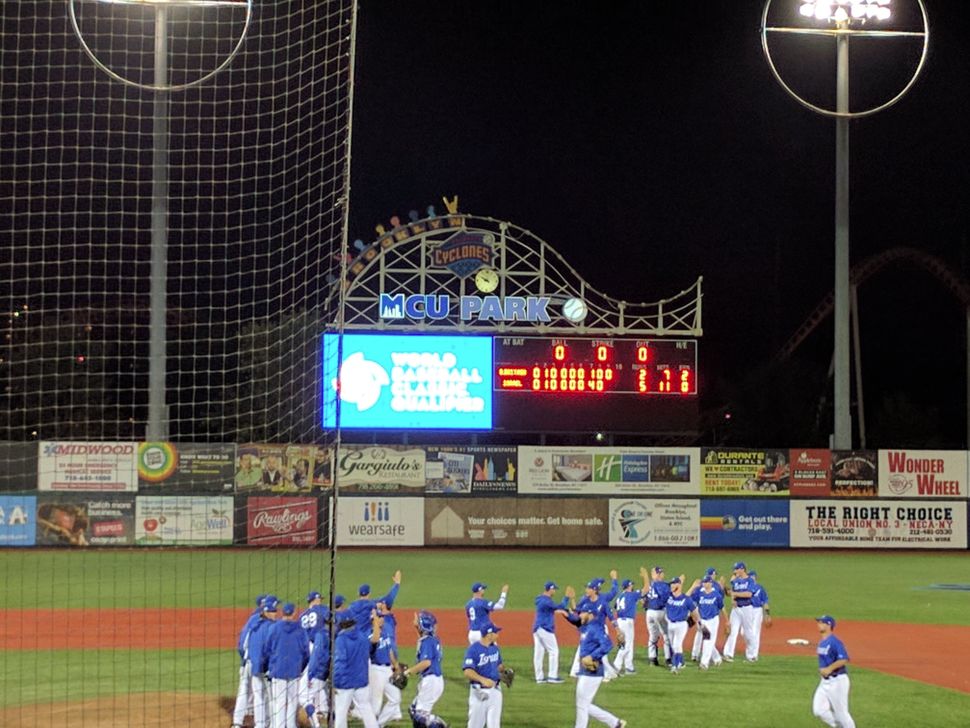 On March 6th the Israeli national baseball team will take the field for the first game of the World Baseball Classic (WBC) against Korea, in Seoul. This is the first time Israel has qualified for the WBC and reason for Israel’s nascent baseball program to celebrate — sort of. The team that will represent Israel in the WBC includes two Israelis, pitchers Dean Kremer and Shlomo Lipetz. The remaining players are American Jews, including some reasonably well known current or former big leaguers like Sam Fuld, Jason Marquis and Ike Davis. Welcome to the strange world of Israeli baseball, American Jews and the WBC.

The WBC, unlike the World Cup or the Olympics is not run by an international governing body, but by Major League Baseball (MLB) a for profit American corporation that is immensely popular among American Jews. MLB uses what they call a “heritage rule” to allow players who are eligible for citizenship in any country to play for that team. The primary reason for this is to dilute American talent so that the tournament proves more competitive. Accordingly, some Italian Americans can play for Italy, some German Americans for Germany and the like. Israel is a big beneficiary, because all Jews anywhere are eligible to become citizens of Israel. MLB, for its part, has encouraged American Jews to play for Israel, because, unlike many international organizations, it recognizes the organic connection between all Jews and the state of Israel.

MLB has also worked to ensure that the WBC is a welcoming environment for the Israeli team and their many Jewish fans, particularly in the United States. Last fall, the qualifying round for the last spot in the tournament was played in Brooklyn. Two of the other teams were from Muslim countries, Pakistan and Saudi Arabia, but the games were played in the best spirit of sportsmanship. Nobody refused to shake hands and politics were, somehow, not part of the tournament. The biggest problem many Israel fans confronted was that the Israeli caps and t-shirts quickly sold out.

There is, however, another perhaps unintended and strange consequence to the heritage rule. Effectively, the U.S. fields two teams in the WBC. These teams will be segregated by religion. The Jewish American players will represent Israel, while Christian Americans will represent the United States. Jewish Americans are, of course, eligible to play for the American team, but only two Jewish players, Houston Astros’ rookie Alex Bregman and Ian Kinsler of the Detroit Tigers, are playing for the American team.

Thus, this rule that was initially crafted to allow American Jews to play for a country about which they care, has instituted separatism and reinforced ugly stereotypes about Jews. First, it provides fodder for those who believe that Jews are not quite true Americans and are more loyal to Israel than to the US. During a time when the President of the United States promotes the old anti-Semitic slogan, “America First,” this is something that cannot be ignored.

Second, because the US team is much better than the Israeli team, the WBC will give some credence to the tired and offensive notion that Jews stink at sports or other physical activities. While that may have been true a few decades ago, it is no longer the case. There are more Jews in professional baseball than ever, including perennial all-star second baseman Kinsler and slugging outfielder Ryan Braun. While it is true that many of the statistics gurus guiding player decisions are Jewish, so are many of the guys throwing and hitting the ball. Today the primary reason there appear to be few Jewish players is simply that Jews are a shrinking proportion of the American population, and fewer big leaguers than ever before come from U.S..

One way to see this question is that if Sandy Koufax were playing today, and if the Dodgers were willing to let him play in the WBC, he would confront a dilemma more difficult than that of whether to pitch on Yom Kippur during the World Series. That one was easy. After all, Koufax managed to pitch in three games and threw complete game shutouts in games five and seven of that 1965 World Series despite not starting game one. If he were playing in the WBC, where a dominant pitcher can carry an otherwise average team pretty far, Koufax’s choice would be whether to pitch for the only country he had ever lived in, which has provided him and his people extraordinary opportunity and freedom, and all but guarantee a championship for the US, or to pitch for the Jewish State, and possibly take that team pretty far. In a much less dramatic way, many Jewish American ballplayers have opted for the latter. MLB should be lauded for giving them that choice, but the potential downside should not be overlooked.

Lincoln Mitchell is the author of Will Big League Baseball Survive?: Globalization, the End of Television, Youth Sports, and the Future of Major League Baseball. Follow him on Twitter @LincolnMitchell

Correction: This article previously stated that no Jews played for Team USA, but in fact two Jewish players are on the American team.