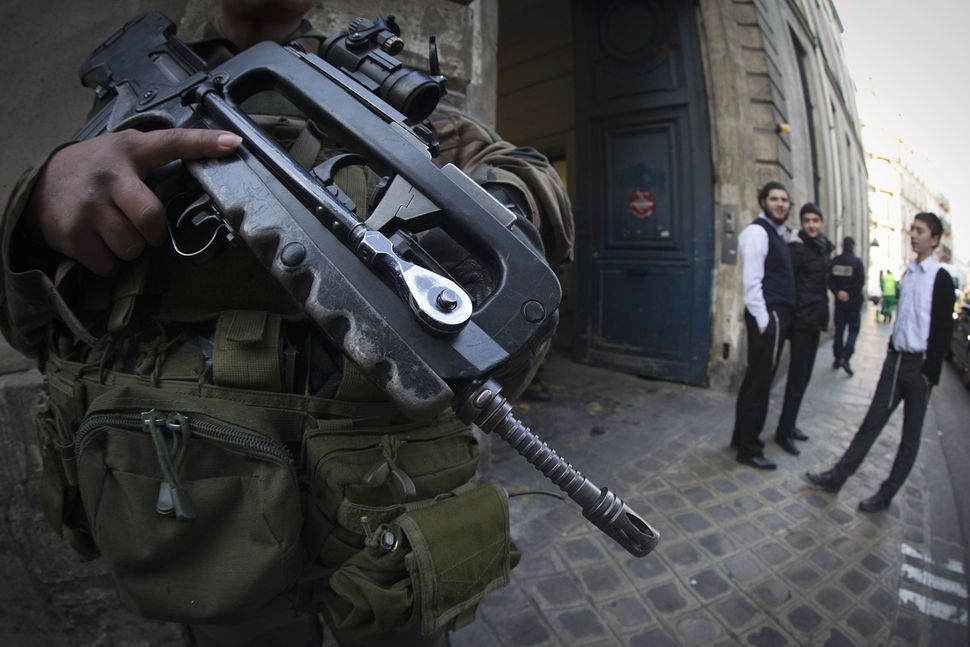 Last week, liberal rabbi Danya Ruttenberg wrote a popular tweet storm, addressing the anti-Semitic attacks against the American Jewish community. Ruttenberg posited that while there may be in increase in non-violent actions against American Jews, we are not as vulnerable as other communities and thus we should support those in the more helpless Muslim and LGBT communities. On the first point, Ruttenberg is right: cemetery vandals and the lone nut case calling in several JCC threats does not constitute a full-bore attack on the American Jewish community. To the second point: we still live in a thriving republic where no group is under attack by the State. Like every other Jew in America, Ruttenberg remains safe and enjoys the freedom to openly practice her faith and oppose any government policy she chooses.

Later, in an email exchange, Ruttenberg told me, “I disagree with the idea that no group is under attack today; to take just one example, this Monday, Trump issued a new version of his Muslim ban, which has been shown not to be about actual security concerns. We don’t need to choose between being concerned about Jews worldwide and our fellow Americans here at home; we can and should fight for justice and safety for everyone.”

While President Trump’s critics may not approve of some of his actions, claiming that any kind of “State violence” is currently taking place or is on the horizon is hyperbolic. In a refreshing interview with the Forward’s Nathan Guttman, the Anti-Defamation League’s former head Abe Foxman concurred, remembering anti-Semitic attacks in Chicago, Seattle, Los Angeles and Washington in which Jews lost their lives. Those deadly incidents should put the wave of bomb threats at Jewish community centers and synagogues in perspective.

“I am not shocked that this is happening,” Foxman said. “What we’re seeing now is serious, but it is not a crisis.”

If American Jewish groups care to appoint themselves guardians of those truly vulnerable, we needn’t look far for a group that deserves not just our sympathy, but also our full-throated defense. European Jews face regular violence and contend with widespread state apathy.

I recently spoke with Annika Hernroth-Rothstein, a Jewish-Swedish political writer and syndicated political columnist for Israel Hayom, who has spent the last several months aghast at the priorities of liberal American Jews (Hernroth-Rothstein made news a few years back by applying for asylum in her own country to draw attention to rising anti-Semitism).

“We [European Jews] feel so disconnected from American Jews because we don’t feel the solidarity,” fretted Hernroth-Rothstein. American Jews are talking about such silly things. I keep seeing protests in New York City with rabbis wearing a tallis protesting immigration; do they know we can’t do that here? Do they know what is going on here for the last five years? Does nobody pay attention that their Jewish cousins are fleeing Europe? American Jews have such an influence. They don’t and won’t use it for our community.”

As if to prove her point, in the last two months the ADL has issued two press releases about “transgender” issues and three in response to Trump’s immigration executive orders, yet it rarely highlights its support for the European Jewish community.

Just in the month of February, two brothers who wore yarmulkes in Paris were ambushed and abducted, with one having his finger sawed off in the attack. Meanwhile, French far-right leader Marine Le Pen warned French Jews in possession of Israeli citizenship they’ll have to relinquish it. And this week started ‘Israel apartheid week’ in France. Benjamin Amsellem, a French Jew, survived a machete attack last year when a Torah – literally – saved his life. Amsellem defended himself against a teen attacker of Turkish descent by holding a Bible between his body and the blade. Like many other European Jews, Amsellem now feels unsafe wearing a kippah in public, so he now dons a cap instead.

And that’s just the bad news for Jews out of France!

Few groups deserve our support and sympathy than our embattled European brothers and sisters. Loving our fellow is a key component of Jewish tradition, found in Leviticus 19:18 and continues to inform how the Jewish community is structured in the present. Of late, an obsession with liberal politics has changed the way we identify who is worthy enough of being a victim for many Jewish organizations and individuals. Is it so much to ask for Jewish communities and organizations to take the position that Jewish lives matter as well?