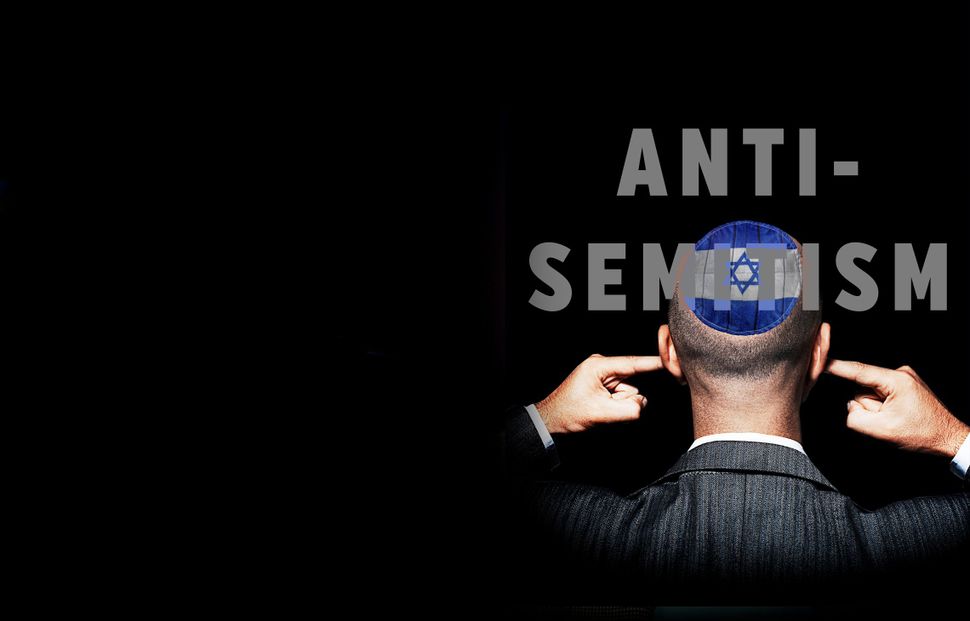 Even though nearly half of the country’s Jewish community centers have received bomb threats; swastikas have defaced schools, colleges and synagogues, and cemeteries have been desecrated, there still seems to be a question about whether America is really experiencing a surge of anti-Semitism.

Mystifyingly, other Jews are asking the question. While those skeptics decry the politicization of anti-Semitism by forces opposed to President Trump, they are guilty of doing the very same thing in support of his agenda.

Jews have long been the largest target of hate crimes, Lori Lowenthal Marcus, a political conservative commentator, wrote in a recent piece. And, she argues, what is happening now may be the result of just better reporting, not necessarily more hate.

Or, as Evelyn Gordon argued in Commentary in January, the rhetoric of the far right is more benign than the actions of the anti-Israel (and therefore anti-Jewish) far left.

Even Abe Foxman, who spent half a century at the Anti-Defamation League calling out every Hollywood star, fashion designer and pro athlete who so much as uttered an anti-Semitic phrase, recently told the Forward that what we are experiencing is “serious, but not critical.”

“We woke up after the elections to discover that our country is not as loving of each other as we’d like it to be,” said Foxman, who now runs a center for the study of anti-Semitism at the Museum of Jewish Heritage, in New York. “It’s convenient for us to blame [Trump.]”

I wonder whether his former colleagues share his sanguine attitude, after they had to deal with a new wave of bomb threats at ADL offices just the other day. (“Another day, another bomb threat,” one sardonically told me.)

ADL employees are professionally prepared for this brutal battle. But how about the parents of the 4-year-olds evacuated out of day care at the JCC? Or the senior citizens told to rush out of threatened buildings, even when it may be difficult for them to move?

What about the descendants of Jews whose final resting places were destroyed and defamed, their grief compounded by seeing gravestones callously toppled into the ground?

As a journalist, I’m trained not to jump on bandwagons but instead to skeptically view the parade from the sidelines and, in so doing, to challenge the easy narrative. Even in the past few months, as my colleagues and I have received hateful, anti-Semitic messages more virulent than anything I’ve seen in decades, I’ve tried to moderate my shock, put it into context. Twitter didn’t exist years ago. Volume doesn’t always correspond to depth.

Desecrating Jewish cemeteries is, alas, a common tactic to erase Jewish history and memory. Which is why the Nazis deliberately dismantled Jewish burial grounds in Germany, Poland and across the swath of Europe they once controlled, using the stolen gravestones as paved stones on roads.

It is why the Jordanians destroyed tens of thousands of Jewish graves ) on the Mount of Olives when they controlled East Jerusalem, using the stones for buildings or latrines. (And why Palestinians were so upset about plans to build a museum in downtown West Jerusalem on an ancient Muslim gravesite.)

It is why local and state governments enact specific laws against desecrating cemeteries. A burial ground is not just another piece of public or private property. It has a recognized sacred purpose.

Even if this has happened before, however, I am baffled by those in our community who would minimize the pain when it happens now.

The same holds true for the intentional disruption caused by the repeated series of bomb threats against JCCs and schools around the country. No deaths or injuries, thank goodness, but low-grade terror, nonetheless. Is that to be discounted, too? A man arrested for making eight of those bomb threats seems unconnected to right-wing politics, but what about the roughly 100 other cases?

This surge — and that is the accurate word here — of anti-Semitism is confusing because it occurs against a backdrop of continued public admiration of Jews and Judaism in America. This is not Nazi Germany, where ever-larger numbers of citizens participated in or enabled the discrimination that turned into the Holocaust. Nor is it government sanctioned — not when the president (finally) denounced it and when all 100 senators demanded that the administration do more.

So while Foxman is right to caution against hysteria — and he’s no Trump supporter — there’s an undeniable connection to the anti-Semitic forces unleashed by the Trump campaign and given social permission even by top White House officials. It may be politically expedient to say so. It also is true.

The Jewish left has been rightly criticized for overlooking blatant anti-Semitism or its disguised anti-Israel counterpart spewing from its radical siblings. But the Jewish right is engaging in the same delusional tactic to protect a president who claims he will be a better friend of Israel without so far offering any proof.

Sacrificing concern about Jews at home for politics abroad only hurts us all.

Report a hate crime using the form below: