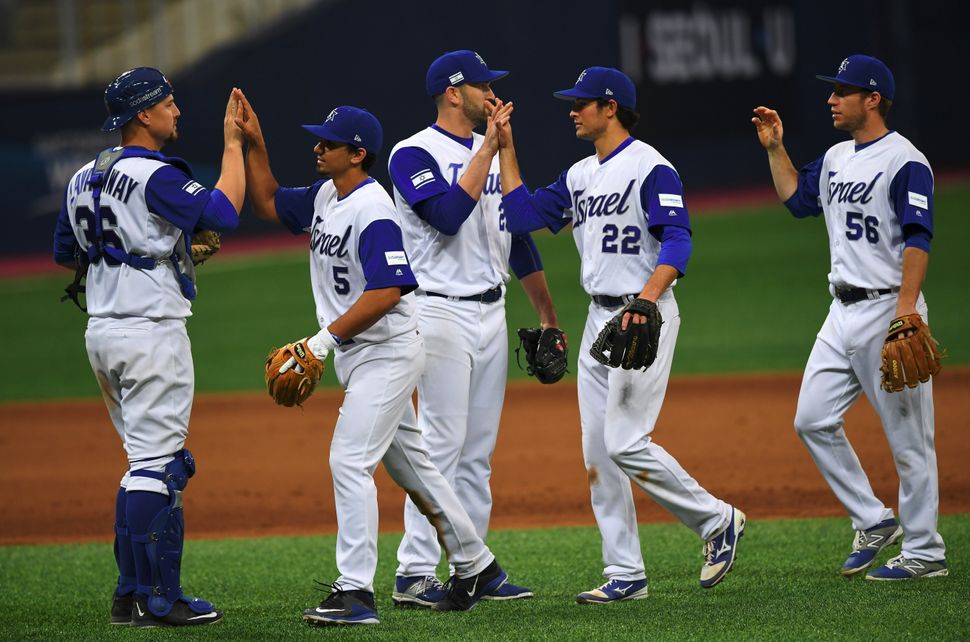 No, there are no Sabras on the team. In fact, most Israelis are unaware they even have a national baseball team. Or how the game is played. Unlike American football, which attracts a small but growing fan base, baseball is for Israelis what cricket is for Americans: not a thing.

Yet suddenly, the Star of David has swept through Seoul and is on the march to Tokyo. Team Israel, a 200-1 underdog to win the World Baseball Classic, has defeated three top-10 teams — South Korea, Chinese Taipei (Taiwan), and the Netherlands — the last of which boasts current stars like the Red Sox’s Xander Bogaerts and the Yankees’ Didi Gregorius.

So maybe Team Israel is not so Israeli, but it’s certainly a Jewish team, and it’s a real underdog. Under the leadership of manager Jerry Weinstein, these Jews — as Jews — have come together, offering a magical balance of power, speed, pitching, defense, strategy and chutzpah to somehow finish the first round undefeated.

For the players, it’s clear that being on Israel’s team isn’t just a way to get into the series. It means something. Former New York Mets first baseman Ike Davis, visiting Israel last summer, said that playing on the team is “representing your past, your heritage, your history. What’s in your blood.” Former Houston Astros pitcher Josh Zeid calls these players “the luckiest group of guys in professional sports. We are very proud of who we are and where we came from. I’ve worn a Jewish star for the last 8 or 9 years, I’m very proud of who I am.”

So is this “Team Israel” just a gimmick? Should we care? Minimally, it’s a load of fun for lifelong fans of baseball and Israel to see the two successfully combine. From the perspective of a sport trying to internationalize, Israel’s success is likely to bring with it a significant investment in bringing baseball to a country preoccupied with soccer and basketball.

Yet on a deeper level, Team Israel is very much the story of Israel itself. It is about Jews — forever the odd man out on every team — reorganizing themselves under a collective flag and anthem, believing in their collective worth, competing on a world stage, finding their own excellence and defeating odds. Looking at their Jewish identity with unalloyed pride.

And that’s an incredible story.

Sure, it’s only sports. But sports are a spiritual placeholder, a metaphor that touches on very real moments of the human soul. And among all the sports, baseball offers a unique balance of individual and collective achievement, and of raw athleticism, technical mastery, and careful calculus, that few other sports can claim.

Metaphors are important. As a real country, Israel is complicated, messy—but no more so than every other country on earth. The bigger Israeli story, however, is one of overcoming, of impossible achievement, of facing down war and adversity and economic hardship and hate, as well as affirming life, not just surviving but prospering. It’s a story we should never forget. A story no less fundamental to Jewish identity, and even more faithful to Jewish history, than that other often-reinforced narrative, that of Auschwitz.

Critics may argue that Jews shouldn’t separate out, shouldn’t make their own team, should always strive just to fit in. A Jewish ballclub, others reason, opens the door to hatred of Jews. This claim, however, is the same as that made against the early Zionists centuries ago, and it never seems to go away. And the results are pretty well known.

And to realize, as these ballplayers stand in honor as Israel’s national anthem is played, that whatever its successes and failures, Israel is still our country. Our team.