From Cain And Abel To A New Kind Of Exodus: David Miliband’s Almost Biblical Journey 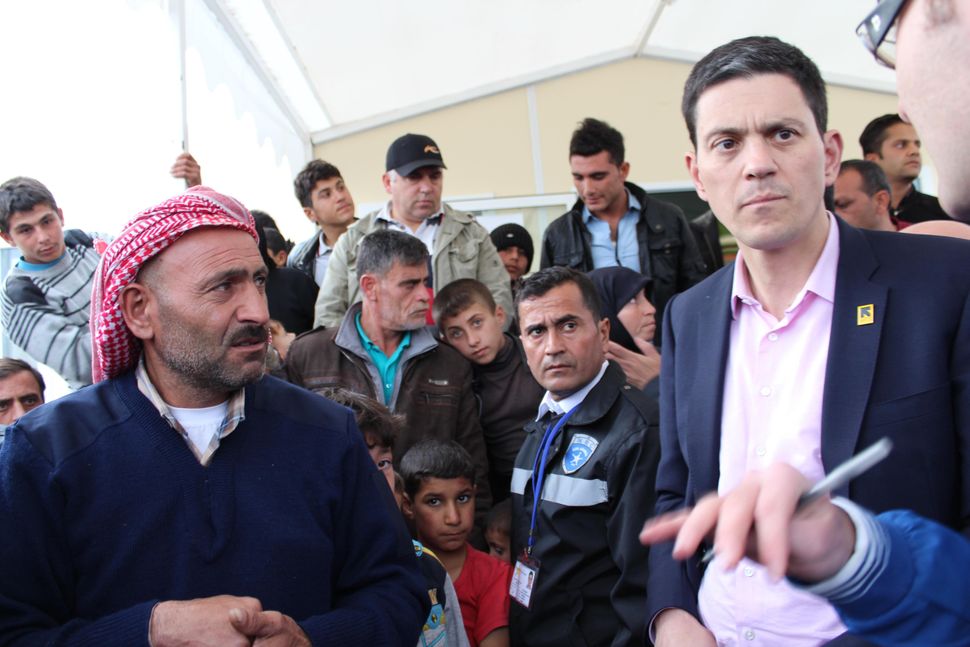 When I first met with David Miliband last year at his modest office at the International Rescue Committee’s Manhattan headquarters, the Syrian civil war had not yet reached its fifth anniversary. Donald Trump appeared to have as much chance of winning the White House as the Oxford-educated Miliband had of sounding like a Brooklyn tough.

And the issues with which he was immersing himself as the IRC president and CEO — how to respond to the massive flow of refugees and other humanitarian crises — were not threatening to blow up the geopolitical status quo. Yet.

Then along came Brexit, followed by Trump’s victory, travel bans, far-right populists and surging hate crimes, and suddenly, what Miliband had been dealing with since he joined the IRC in 2013 became astonishingly relevant, shaping public opinion and leading to unexpected electoral upheaval. His analysis of the complex plight of the world’s swelling number of refugees and his prescription for reform of a dangerously overtaxed system now have not only a strong moral imperative but a political one, as well.

At this fraught moment, it’s fascinating to watch Miliband, 51, a reserved British politician who never hid his Jewish roots but never comfortably displayed them either, draw the connections from his faith and family history to his current line of work — especially now that Passover is upon us.

“One of the abiding aspects of the Jewish story is the debt we owe to strangers,” he told a private dinner gathering before a public lecture at the Jewish Theological Seminary, in New York, last month. For him, this debt is personal — his parents were refugees from Nazi Europe who survived only with the help of strangers — and is also rooted in something greater.

“It’s universal,” he added, “but one that Jewish history enjoins us to engage and explain.”

I have met Miliband several times, and don’t presume to know him well, but I feel confident saying that, a decade ago, he would not have expected to be lecturing in a roomful of yarmulke-wearing Upper West Side intellectuals. He expected to become Britain’s prime minister.

And he surely never expected that the one person most responsible for undoing those ambitions was his once-beloved younger brother, Ed Miliband.

The Miliband story evokes biblical tales — the younger Jacob stealing the birthright from his older brother Esau, or Cain’s refusal to take responsibility for the life of his brother Abel.

David and Ed Miliband were born four years apart in London, to parents who had escaped Nazi-era Europe — father Ralph Miliband a Marxist sociologist from Belgium, and mother Marion Kozaj Miliband from Poland. (She credits Polish Catholics with saving her life.) David Miliband went to Oxford University, and his brother followed. The elder Miliband entered Labour Party politics and so did his brother. 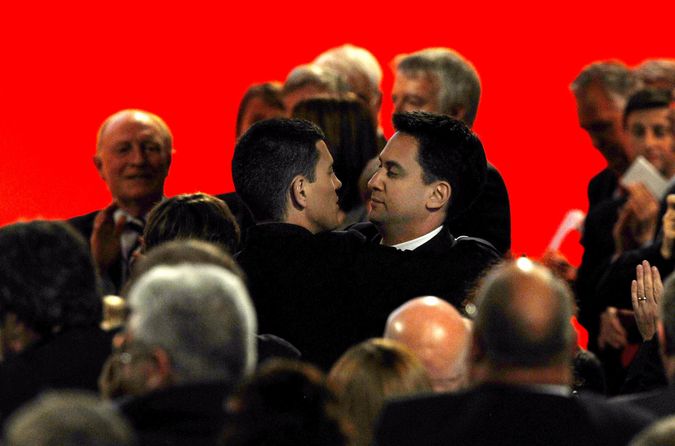 “For a while, they lived in adjoining flats,” The Guardian reports. The younger Miliband was the best man at his elder brother’s wedding.

David Miliband was only 29 when he became Tony Blair’s head of policy in the opposition Labour Party. He helped write the manifesto that led to Blair’s election in 1997. Miliband’s intellect and his mastery of politics were so admired that he earned the nickname “Brains.”

He quickly rose through the ranks to become the third-youngest foreign secretary in Britain’s very long history, positioning himself to become Labour’s next leader when a vacancy arose in 2010. But Ed Miliband, further to the left ideologically but just as wonky, mounted a challenge and, after several rounds of voting, won by a matzo-thin 1.3% margin.

Ego and professional ambition outstripped their fraternal devotion, and no one was surprised when David Miliband left London in 2013 to become the head of the IRC across the pond. To compound the heartbreak, Ed Miliband went on to suffer a sharp defeat against David Cameron in the 2015 general election, and it appears that the brothers are no longer speaking.

The Daily Telegraph gleefully noted that when David Miliband celebrated his 50th birthday two months after the election, in an upmarket London restaurant, his brother was photographed at a cricket match a few miles away. The story even included a map displaying the distance between the two men.

I’ll be honest: I didn’t have the heart to ask Miliband about his brotherly break-up when we met in his office last year. Instead, I asked him whether he found the IRC or the IRC found him, and he replied diplomatically: “Both, really. I’m pleased there was a vacancy the time there was.”

He said the job enticed him for three reasons: the humanitarian issues, the chance to play a leadership role on the global stage, and the opportunity to repay a debt. That last reason provides a “point of connection” when he speaks about refugees who are fleeing persecution, he told me, but he downplayed his family’s story.

“British people are more private than Americans,” he acknowledged at the time. “We don’t wear our history on our sleeves.” Perhaps it was the Jewish setting, perhaps it was Trump’s startling election and the heightened political situation, but when Miliband spoke at JTS a year later, he embraced a more personal and religious rhetoric. He tied Trump’s policies and the American antipathy toward refugees now to the analogous moment in 1939, when the public feared European Jews trying to flee here.

“They may not come for Jews first now,” he said, positioning his lanky frame before a lectern, a splash of gray in his thick, close-cut hair, “but we know they will come for Jews in the end.”

While the refugee numbers today are staggering, he insisted the crisis is manageable and not insoluble. About 65 million people are considered refugees worldwide — 25 million stuck in countries not their own, and 40 million displaced internally. That’s up from about 60 million in 2014, according to the United Nations High Commissioner For Refugees.

These are, let’s remember, people who did not have the luxury of choosing to leave their homelands and instead were forced to flee because of war, violence, famine and other natural or human-made disasters. Women and children, especially, face abuse and exploitation, and need additional protection.

Despite all the overheated hollering by the president, America is not overrun by refugees. Quite the opposite. Less than .2% of Syrian refugees have resettled here, a number known precisely because they are the single most vetted population entering the country.

“Here’s the tragedy,” Miliband fretted. “You have the best refugee resettlement program in the world, and yet it is harder to get to the U.S. than to any other place.”

And most of the IRC staffers who serve refugees are not Westerners swooping in to do good, but local people who know the indigenous landscape better than anyone.

“We have 1,000 people working in Syria, and I can assure you, they’re not Americans,” Miliband said dryly.

The IRC chief has been outspoken in arguing that the humanitarian aid system must be reformed to focus on cash distribution, especially in cities. Donors, he wrote last October in The New York Review of Books, “need to accept the idea that the best approach to helping refugees is often not to deliver tents or food but instead to give them money.” This allows refugees to use the money as they see fit — to pay for rent, food and clothing, to cover their school fees — and it also stimulates local economies.

The system also must encourage and support host countries to allow refugees to work and become productive residents, instead of feeding the fiction that their stay is temporary and that a return home is imminent. For the vast majority, it is not; fewer than 1% of the world’s refugees returned home last year.

“The most vulnerable refugees have to be resettled in countries where they can start their lives over again,” Miliband said. Instead, they are crammed into underdeveloped countries with fragile economies and precarious political systems, overwhelmed by the unexpected burden of swelling populations.

Consider: Lebanon shelters more refugees in comparison with its national population than any other country — and it doesn’t even have much of a government. Kenya alone provides refuge for almost half of the more than 1 million people who have fled Somalia since 1991. Conversely, we’ve accepted slightly less than 100,000 between 2001 and 2016.

The numbers are compelling, but what Miliband does best — in his smooth, articulate, thoughtful way — is link the policies to a moral urgency that has additional resonance as we prepare to recount our own exodus.

“This debate is not about them, it’s about us,” he said. “It’s about what we believe in, what we are willing to sacrifice to aid the stranger. This is a hard test of morality, a hard test of a vision of a good society. It’s important that we face up to that. We reveal our character in the way we deal with refugees.”

From Cain And Abel To A New Kind Of Exodus: David Miliband’s Almost Biblical Journey