How Trump Served Us An Extra Helping Of Fear This Passover 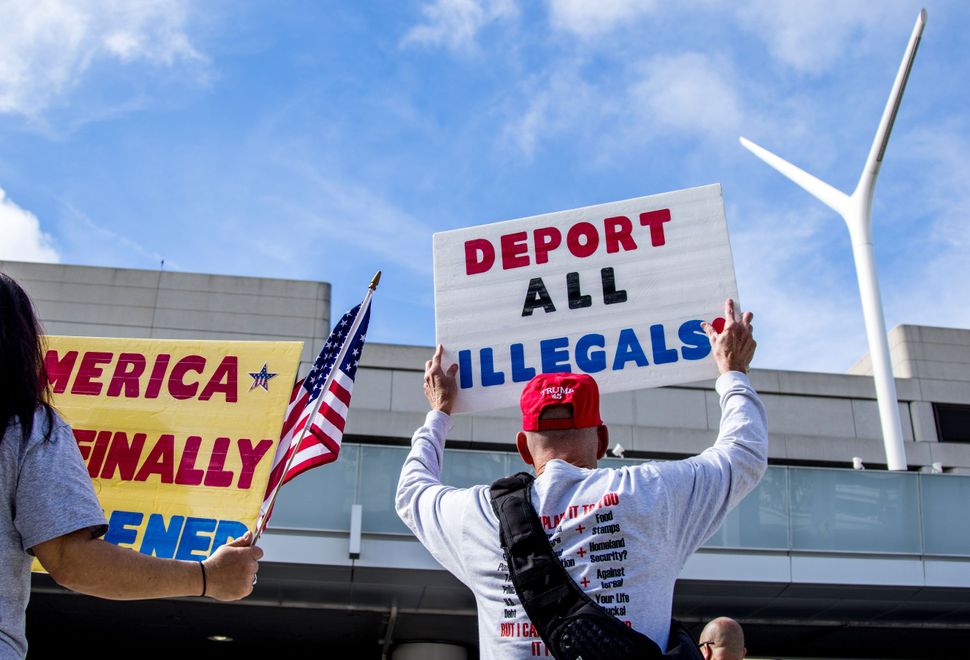 Rosa spent five years of her young life being hunted by the Nazis and their accomplices in Eastern Europe. When Nazi troops entered her native town of Lublin, Poland, in 1939, she escaped to Ukraine. Along with her sister and an in-law, she then fled the Kolomiia ghetto in south-western Ukraine in 1941. Many others were executed in mass pits.

Thanks to the heroism of local farmers, she hid for the remainder the war, including an 11-month stint in a pigsty. The rest of Rosa’s family were not so lucky. Her parents and three little brothers were all murdered in Majdanek and her sister somewhere in Ukraine. To this day, the photos of her family hang from the walls of her home as touching and painful reminders of lives cut short. Following the war, Rosa met her husband, another survivor from Munkacs, and they moved to land of hope: America.

Though I am a historian of the Holocaust, I did not come across Rosa’s story during my years of research in archives. I know her story because she is my wife’s bubbe, her grandmother. All four of my wife’s grandparents survived the Holocaust in Eastern Europe, but Bubbe, now 95, is the only one I have had the chance to meet. As someone who has interacted with survivors throughout my adult life, yet having none in my own family, it has been a blessing to have her in my life and to get to know this loving, graceful woman. Not only is she an inspiring woman, but she is also the person who helped raise my wife, who grew up a few streets over from her. She imbued so many of her own qualities in my wife: a passion for life, pride in her culture; a thirst for knowledge, and most of all, courage.

My wife has spent every Passover of her life at home in Montreal with her Bubbe and extended family (Rosa and Emil moved to Montreal to be closer to family in the 1960s). This year was an important one for us, as Bubbe’s health has rapidly declined. However, this year my wife will not be going home to be by her side. My wife, who grew up in Canada but did all of her education, including her doctorate, in the United States, never received citizenship here. This despite the fact that her mother and grandparents are U.S. citizens. Now that she has a tenure track position at an elite university, she must obtain a visa to stay here either through an H1B work visa or marriage (as I am an American citizen).

After counsel from the university, which facilitates the process, our plans this winter had been to file for the H1B through expedited processing, since this was the fastest and easiest method. This would allow my wife to travel if needed for emergencies, such as a death or, for instance, for this Passover holiday. We were told by the university that the application would be taken care of with few problems. She’s a Canadian with three U.S. degrees, an American family and job at an elite university. What could possibly go wrong? It turns out as a result of the chaos the Trump administration has wrought upon our immigration system, and pre-existing long-term problems with the application process, the expedited processing option for the H1B has been halted and the turnaround time for the marriage will be just as long as an H1B without the faster processing.

The fear the administration has stoked created a perfect storm around the filing time for this expedited service this spring, with tens of thousands of immigrants seeking to get their visa before the administration takes even more draconian measures. As a result of this chaos, the agitated university visa coordinator told us my wife could not travel for the time being, even though a month prior we were told traveling would pose no risk to the visa process. While we hope to get the visa in due time, there is a possibility that my wife may not be allowed to travel for months. And though “technically” she should be allowed to travel for a death, or emergency back to Montreal, the vindictive and cynical behavior of the United States Citizenship and Immigration Services in recent months has left universities and immigration law firms urging people like my wife not to leave the country under any circumstances, including in the event that we lose Bubbe.

Throughout this visa process, I have tried to reflect on the larger picture to make sense of this mess: Is any of this bureaucratic chaos making America safer – do Canadians with American families, advanced degrees, and jobs need to be more strongly vetted? Cannot the Congress and president come up with a more humane and rational way of fixing the system, if the current one, in their minds, is so broken that reasonable processing times for nonthreatening individuals like my wife must be eliminated? Or perhaps I am asking the wrong questions here: Maybe this has nothing to do with making America safer or fixing a cumbersome and convoluted visa system – it has to do with placating the xenophobic at the expense of families like ours.

Even as I write these lines, it gives me (and perhaps readers) pause that I have not mentioned my wife or the name of her university. I have done this out of fear of retribution from my government. And this is not a fear I possessed prior to this incident, but rather it is a new one. We were advised by our university not to publicly share our views on the situation, since apparently one never knows the reasons visas are denied these days. As someone who studies right-wing authoritarianism in East-Central Europe, never in my wildest dreams would I have thought there was a moment when I would fear retaliation from my government for expressing my political views in public.

While we are angry and bewildered over this situation, we also recognize so many others who are now in a far worse predicament. Many of our Muslim colleagues not only face not only the prospect of being stuck in immigration limbo, but also the real prospect of not getting the work visa that they deserve. Our hearts are heavy not just for our fate, but also for that of so many around us whom we know and care about, and those whom we do not know but with whom we commiserate.

The last time we saw Bubbe was last Rosh Hashanah. We stopped by her home on our way to the airport to say goodbye. We caught her in the middle of a nap; nestled under a blanket on the couch in the den. My wife huddled on the ground beside Bubbe, holding her hands and stroking her hair as she drifted in out of consciousness, probably somewhere between Montreal and Lublin; somewhere in between the cloudy present and a lifetime of memories with her recently passed husband, Emil. She whispered to her, “I love you, Bubbe, I will see you soon,” as Yiddish music played on old record player and sounds of “Farges Mikh Night” (Do Not Forget Me) ricocheted off the wooden living room walls and into our ears.

At this year’s Seder, we did not forget Bubbe; nor the rest of the family with whom we cannot celebrate this important holiday. We did not forget the reason Bubbe and Zaydy came to the United States in the first place, though it gets harder by the day. Nor did we forget our escape from bondage and Pharaoh thousands of years ago; and lastly, we did not forget what the current Pharaoh has done to the lives of so many good people in this country.

How Trump Served Us An Extra Helping Of Fear This Passover