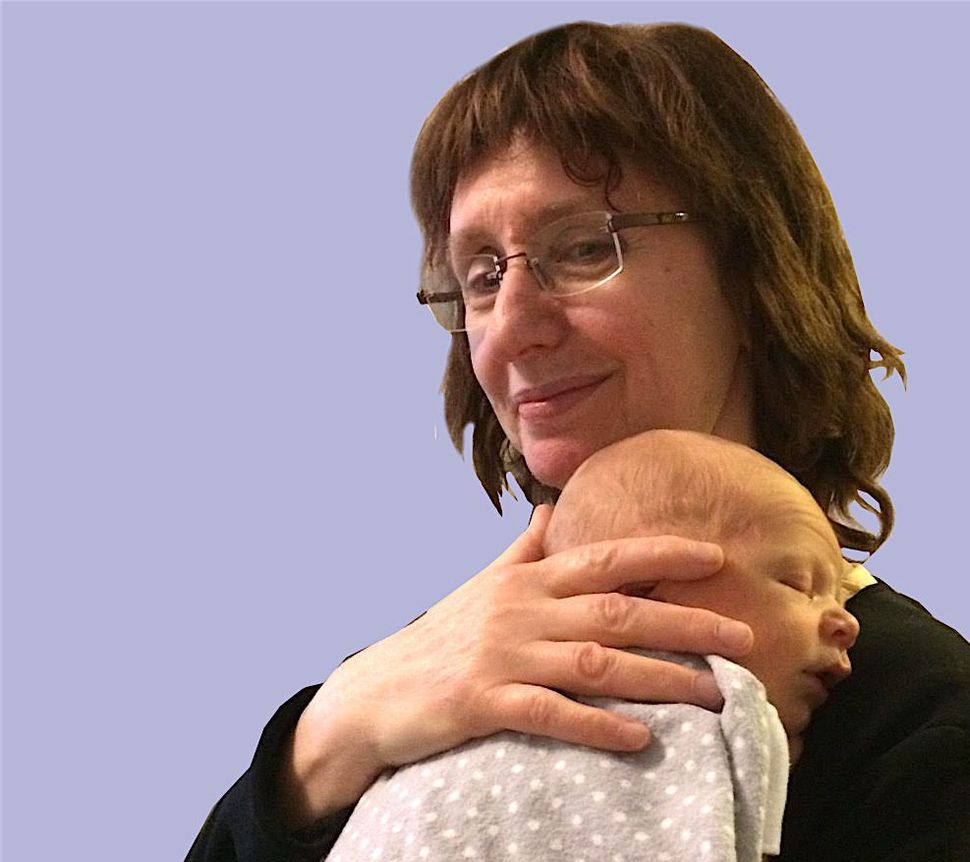 Image by Courtesy of Rukhl Schaechter

On January 15, 2017, I — the mother of three adult sons — finally became a grandmother. Following the Jewish tradition, the new parents, Menachem and Emily, chose not to divulge the name of the infant boy until the bris. So when the rabbi announced that my grandson’s Hebrew name was Eliahu Mordechai (Elye Mordkhe in Yiddish), my husband, Leon, and I were thrilled, since Mordechai, or Mordkhe, was the name shared by both of our fathers.

Now, people have started asking me what I’d prefer to have my grandchild call me. Although there’s time to decide (most kids don’t begin speaking till about 18 months), I admit the question has consumed me. There’s no doubt I want to be called by the Yiddish word for grandmother, bubbe, but even this has several variations. Among Hasidic speakers today, it’s bahbee (rhymes with “lobby”); among the “yeshivish” crowd, it’s mostly bubbe (rhymes with “hubby”).

But, sadly, outside the ultra-Orthodox community fewer Jewish women want their grandchildren to call them bubbe, claiming it’s too Old World. Perhaps, though, the real reason is that bubbe is simply too Jewish. So now some grandmothers are choosing the Israeli word, “savta,” whereas others simply resort to English-language monikers.

It seems the term bubbe has taken on negative connotations, similar to many other terms related to Jewish women, as in the classic “Jewish mother” or “mother-in-law.” The B-word is seen as a vestige of a previous era, causing modern, educated women to run the other way.

Even some very traditional women eschew the word. Several years ago, on a Sabbath morning, I was walking from synagogue to my home in Yonkers, New York, when I bumped into neighbors — an Orthodox rabbi and his wife. The couple, in their 70s, are American-born, but they know Yiddish from their childhood. They were taking a walk with several of their grandchildren.

Suddenly, one of the children cried out “Grandma!” and the rabbi’s wife rushed over. I stared in disbelief. “Grandma?” I asked her. “That’s what your grandchildren call you? Not bubbe?”

“Absolutely not!!” she shot back in mock indignation. “Bubbe’ always reminds me of my own grandmother — may she rest in peace. She was very old and frail, never adjusted to life in America. Please,” she protested, “I’m no bubbe.”

Negative associations with “bubbe” appear even in classic Yiddish literature and folklore. In Abraham Goldfaden’s famous operetta, “The Witch,” the sorceress herself is called Bubbe Yakhne. Morris Warshawsky’s song, “Di Mezinke Oysgegebn” [“Marrying Off My Youngest Daughter”], describes the many lively scenes at a wedding, including one verse where “Bubbe does the kazatsky” — an image that’s apparently meant to evoke laughter, since grandmothers are expected to sit quietly and with dignity, rather than to clown around and dance “like the men.”

Although the Yiddish word for grandfather — zayde — is also associated with elderly Jews in the old country, it doesn’t carry the same negative associations.

Yet, despite the fact that fewer grandparents are opting to be called Bubbe and Zayde, every once in a while I find people my age identifying as such, and, needless to say, I’m thrilled. Larry Lerner, a 59-year-old friend of mine in the Riverdale section of the Bronx, owns two cars with license plates proclaiming the word zayde in large, bold letters. And he’s no geezer stuck in the past. He’s a physician, skillful bicyclist and a strong skier.

As for me, like many grandmothers these days, I exercise daily and have even begun practicing boxing cardio workouts. I’ve actually started joking with my trainer that he can start calling me The Boxing Bubbe.

My late aunt, Mumeh Beltse (mumeh is Yiddish for “aunt’), used to paint evocative portraits of grandmotherly figures, and one of these paintings now hangs on my kitchen wall. In it, a little girl is sitting in the kitchen with a stout, apparently pious, elderly woman whose head is covered with a heavy shawl. The girl seems to be listening to the woman, transfixed. Floating above them are the Yiddish words “Amol iz geven a mayse,” meaning “Once upon a time.”

My guess is that in painting this, my aunt had seen herself as that little girl, and the bubbe represented the older generation whose role it is to transmit the family lore, Jewish stories and traditions, to their children and grandchildren.

One day, I told my Aunt Beltse that although she may have painted the picture from the little girl’s perspective, I actually saw myself as that little girl, and saw her — my aunt — as that grandmotherly figure from whom I had learned so much about our family history, even though Beltse herself was a modern, secular woman who looked nothing like the old pious woman in the painting.

And this, I believe, is the real meaning of the word bubbe. She’s the one who passes on the stories about relatives of years past, the sad and the funny moments, the Jewish traditions, the holiday recipes. A Jewish grandmother can — like me — be a Barnard grad, an editor and even something of a boxer, yet at the same time instill in her grandchildren the importance of Jewish memory.

No word captures this vital role better than bubbe.

Rukhl Schaechter is the editor of the Forverts.

What name would you pick if you were a grandmother? If you’re already a grandmother, what name do you prefer your little ones call you? We want to know! In our poll on Twitter, we’ve found that 44% of respondents use Grandma, while only 22% use Bubbe. Message us in the comments section of this article and let us know what your grandchildren (hypothetical or real) call you.