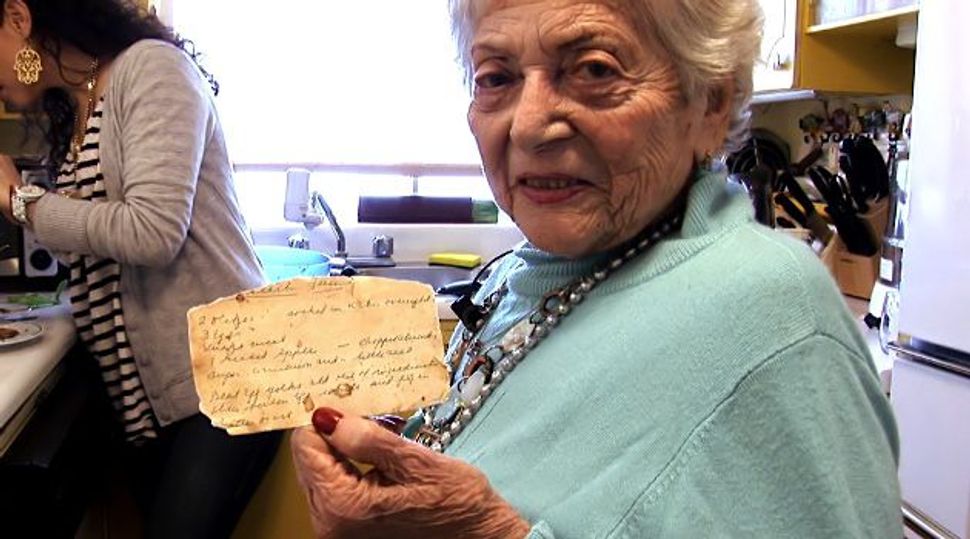 If ready-made and microwavable meals were the novelty foods of the ’90s, “back to basics” is the motto of the 2010s.

Twenty-somethings across the country are rolling up their sleeves and joining their grandparents in their kitchens, learning to make the dishes their bubbes and zeydes were raised on — in some cases, recipes they carried with them from “the old country” to America. In the process, they are learning the stories of the dishes that sustained their families.

Of course, looking to grandparents for recipe advice is nothing new, and individual recipes can be found hidden in the pages of countless cookbooks. But several new recipe projects in the Jewish community are offering something different, says Jewish librarian and cookbook collector Roberta Saltzman: They’re teaming up groups of like-minded recipe documenters and putting the stories of Jewish family recipes online.

Beyond Bubbie, the largest of these projects, bills itself as “an interactive community cookbook and a place to share the stories and memories connected to these recipes.” Anyone can send in a recipe with a story, and since its launch in 2012, 90 or so people have. Contributors range from once-in a-blue-moon cooks to Jewish food icon Joan Nathan, who shared her mother-in-law’s recipe for Zamosc gefilte fish.

The project’s definition of bubbe is all encompassing. “A ‘Bubbie’ could just as easily be a favorite uncle, beloved family friend, or next door neighbor,” the website states. “What makes them a Bubbie in our books is the love they’ve poured into these dishes and the memories you’ve created over them.”

In addition to the website, the project also has a social component. Reboot, the Jewish organization that funds the project, organizes workshops and events to bring people together through food and stories, and provides a DIY toolkit to other organizations who want to do the same.

Food writer David Sax, who is one of the minds behind the project, explained that the recipes aren’t the real focus of these projects. “What makes a recipe interesting is the story,” he said. “Every bubbe has a kugel, but if your bubbe grew up in Shanghai and mine grew up in Berlin before the Holocaust, they will have drastically different experiences.”

Like the recipes themselves, these projects reach across borders. Rebecca Lessard, Claudia Itzkowich, Myrite Rotstein and Sarah Cohen-Fournier connected in 2011 over a short video that Lessard had made of her Syrian grandmother teaching her to make mehshi kusa (stuffed zucchini). That video ultimately inspired Roots and Recipes, a project similar to Beyond Bubbie that focuses on the diverse Jewish community of Montreal.

Montreal is the perfect incubator for a project designed to honor the multiculturalism of Jewish life. Roots and Recipes represents Anglophones and Francophones, Ashkenazim and Sephardim, recent immigrants and those who have been in Canada for generations

The project, which is funded by Gen J, has produced two episodes of “Dishing up the Past,” a web series in which grandparents share and teach their recipes to their grandchildren. Three more videos are currently in the works. Like Beyond Bubbie, Roots and Recipe also has an interactive component. This year, Lessard and her colleagues organized two cooking workshops: one for students of oral history at Concordia University in Montreal, and another as part of the 2012 Le Mood Festival of Unexpected Jewish Learning, Arts & Culture.

Celebrating Montreal’s large Sephardic population, the first episode of “Dishing Up The Past” focused on Gilberte Cohen-Scali, a family friend of Cohen-Fournier’s grandmother, who taught the Roots and Recipes audience to make traditional Moroccan [salade cuite (cooked salad)][4] and vegetable couscous.

There is something about food that is a “kind of a communication between grandchildren and grandparents, said Alexa Karolinski, director of the Berlin-based documentary “Oma and Bella”. The film tells the story of Karolinski’s grandmother and her best friend Bella, who taught themselves traditional recipes as young adults after being orphaned by the Holocaust. “You go to your grandmother’s for lunch or for dinner and she feeds you. And that’s the thing you do together.”

According to Gail Reimer, Founding Director of the Jewish Women’s Archive, Jewish culture is intimately linked with food and as such, these projects tap into something powerful. “It’s another way of saying ‘I belong to a tradition… [and] I can make it my own.’ Food is a wonderful way to do that,” she said.

“Every generation grapples with Jewish identity,” said Amelia Klein, associate director of Reboot. “It’s clear that in our generation there’s a desire to reconnect with the past but also to connect it with the future” — tradition, but with style. The motto is practically the hallmark of the current trends in Jewish cuisine.

But why skip a generation? According to Barbara Haber, former curator of books at Radcliffe’s Schlesinger Library at Harvard University, which houses a notably cookbook collection, the reason is simple: “Cooking and food, at the height of feminism, was considered to be trivial and a badge of dishonor. There was a generation of women who skipped the cooking because they were much more interested in competing for jobs — and therefore the millennials didn’t really have home cooking.”

For the grandmothers, food and cooking played an integral role in many of their lives and identities. “Some of these women come from generations where they weren’t always asked for their opinion,” Lessard explained. “This is their area of expertise and they feel confident talking about it.” In the comfort of their kitchens, women who may feel intimidated sharing their life stories in a formal interview setting are suddenly able to open up, using food as a way into discussing their life stories.

Another contributing factor to the timing of these projects is that in many cases, grandparents of the millennial generation are the last to have immigrated from “the old country.” And “preserving these stories is urgent because this is a generation that is dying,” Reimer explained.

A line in the story that accompanies Joan Nathan’s recipe says it all: “She used her mother’s recipe, handed down orally, from Zamosc, Poland.” If these recipes aren’t written down, or taught to the next generation, they will be lost forever.

But for Reimer, a cup of this or a cup of that is not the issue. “The recipes are the things that I’m least worried about preserving. Stories about what life was like in Eastern Europe are much more likely to be lost.”

Sax agrees: “[The stories] tell something far greater about the Jewish experience than just measurements.”

Anne Cohen is a news intern at the Forward. She has also contributed to Wewomen.ca, and The Brooklyn Daily Eagle. Follow her @anneesthercohen

1) Heat the oil in a pan.
2) Fry the garlic till golden, and add the peppers.
3) Add the tomato cans with the juice.
4) Salt with moderation.
5) Let it simmer at low heat for 30 minutes, or until all the liquid is reduced.