Behind the Scenes of ‘Oma and Bella’ 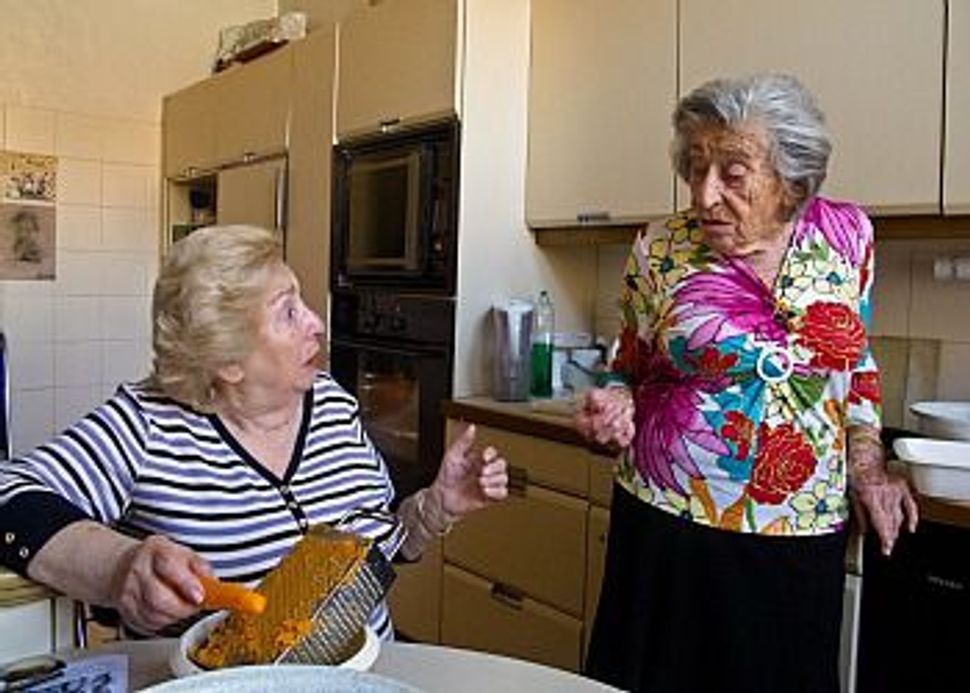 For centuries, Jewish food traditions have been passed down from generation to generation. In kitchens around the world, parents and grandparents have guided youngsters as they roll their first matzo balls for soup, taste the batter for a sour cream coffeecake, or learn the sharp, malty scent of baking sourdough bread. But when a young person loses her whole family — as Regina Karolinski and Bella Katz each did during the Holocaust — those secrets of hearth and home get lost along with everything else.

In the new film “Oma & Bella” German filmmaker Alexa Karolinski (Regina’s granddaughter) tells the story of her oma (German for “grandmother”) and her best friend Bella — two elegant and charismatic women, both Holocaust survivors, who now live, kibbitz and cook together in their shared Berlin apartment. Fortified with slowly caramelized onions, generous pinches of sugar, and other ingredients associated with Jewish soul food, Oma and Bella’s cooking — their brisket-filled blintzes, their barley soup, and lusciously-soft baked apples — has become the stuff of family legend. But it was not always this way.

“Having lost both of their families in the Holocaust, [they] had to teach themselves, often from scratch, how to make the dishes their mothers and grandmothers made for them,” writes Karolinski in the introduction to the companion cookbook she self-published along with the film. “In doing so, they built a bridge from their past into the present, drawing on tastes and smells from a vanished world as a gift to their children and grandchildren.”

Karolinski herself learned to cook during the project, mostly through watching Regina and Bella prepare kreplach, tzimmes, rugelach and other Jewish classics. Karolinski said she grew up eating at her grandmother’s house for lunch every week, so she knew the taste of Jewish cooking well. But until making the film, she had never learned to cook anything beyond scrambled eggs and spaghetti with tomato sauce. Writing the cookbook was a lesson in trial and error — and patience. “I begged them to use regular teaspoon and tablespoon measures,” Karolinski said. “Or I would watch which wine glass they used for the flour, then go back later and measure how much it held.”

Making the film, which premiered earlier this year at the Berlin International Film Festival, was a slightly easier process. “Oma and Bella were born to be filmed,” Karolinski said. “They loved the whole thing.” Karolinski did, too. In addition to learning how to cook, Karolinski said she also gained new insight into her grandmother’s inner life. “Growing up, we had a close grandmother-granddaughter relationship,” she said. “But through this project, I got to know her as a person and a woman.”

To find out more about the film and cookbook, and view more video clips of Oma and Bella at work, visit omabella.

Behind the Scenes of ‘Oma and Bella’